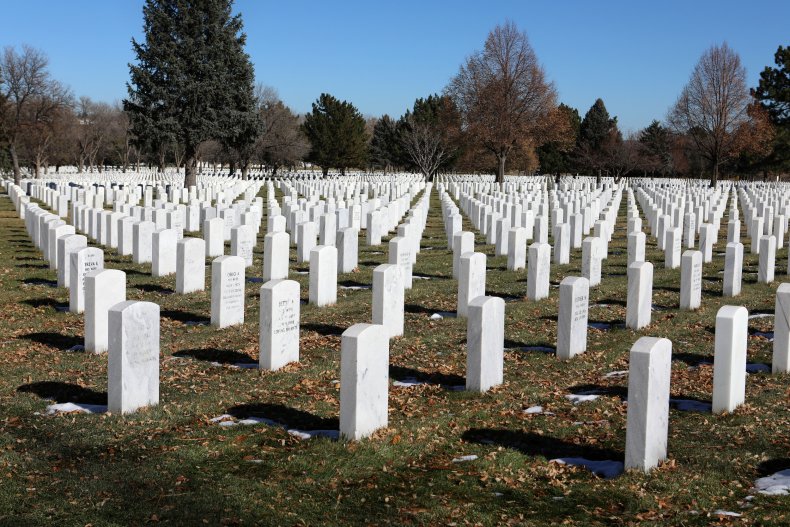 A woman in Denver was arrested after she allegedly veered off the road and crashed into several headstones at a veteran’s cemetery on Memorial Day, according to a report from the Denver Police.

No injuries were reported and authorities said it was unclear how many headstones were damaged.

The woman remained on the scene until police arrived, and Denver Police reported the driver, whose name was not released, was allegedly intoxicated and was arrested for a DUI. A police spokesperson told Fox News the investigation was ongoing.

Denver7, a local news station, spoke to a bystander who had been at the cemetery to honor some of his family members on Monday and had seen the incident.

“It just got worse and worse,” Antonio Moran told Denver7 as he described seeing a red car driving at full-speed across the lawn, after hitting two other vehicles and sliding into some gravestones.

Moran said that he could see some headstones had been completely ripped from the ground, others broke in half.

According to Moran, the driver was smiling as she was taken away, yelling for sympathy at the crowd of people who had been there for Memorial Day.

“This day is supposed to be about honoring and giving respects and remembering the veterans that gave their lives for this country,” said Moran, “so the fact that someone made these kinds of choices and disrupted a cemetery out of all places, it’s sad.”

Douglas County Commissioner Lora Thomas was at the cemetery visiting her father’s grave when the crash took place and tweeted about the incident.

Fort Logan National Cemetery’s usual Memorial Day ceremonies were canceled this year due to COVID-19, but many groups and volunteers went to continue their own traditions.

CBSN Denver reported that nearly 2,300 people were out in the cemetery on Sunday to plant over 100,000 American flags, one in front of each and every headstone. On Monday, a volunteer group known as Victory for Veterans laid thousands of flowers at the graves. According to KDVR, this year they distributed about 10,000 roses.

“It just gives you a humbling feeling that they served our country and they are laying here peacefully and we are showing them the respect they deserve,” retired Army Colonel Mikel Burroughs told KDVR.