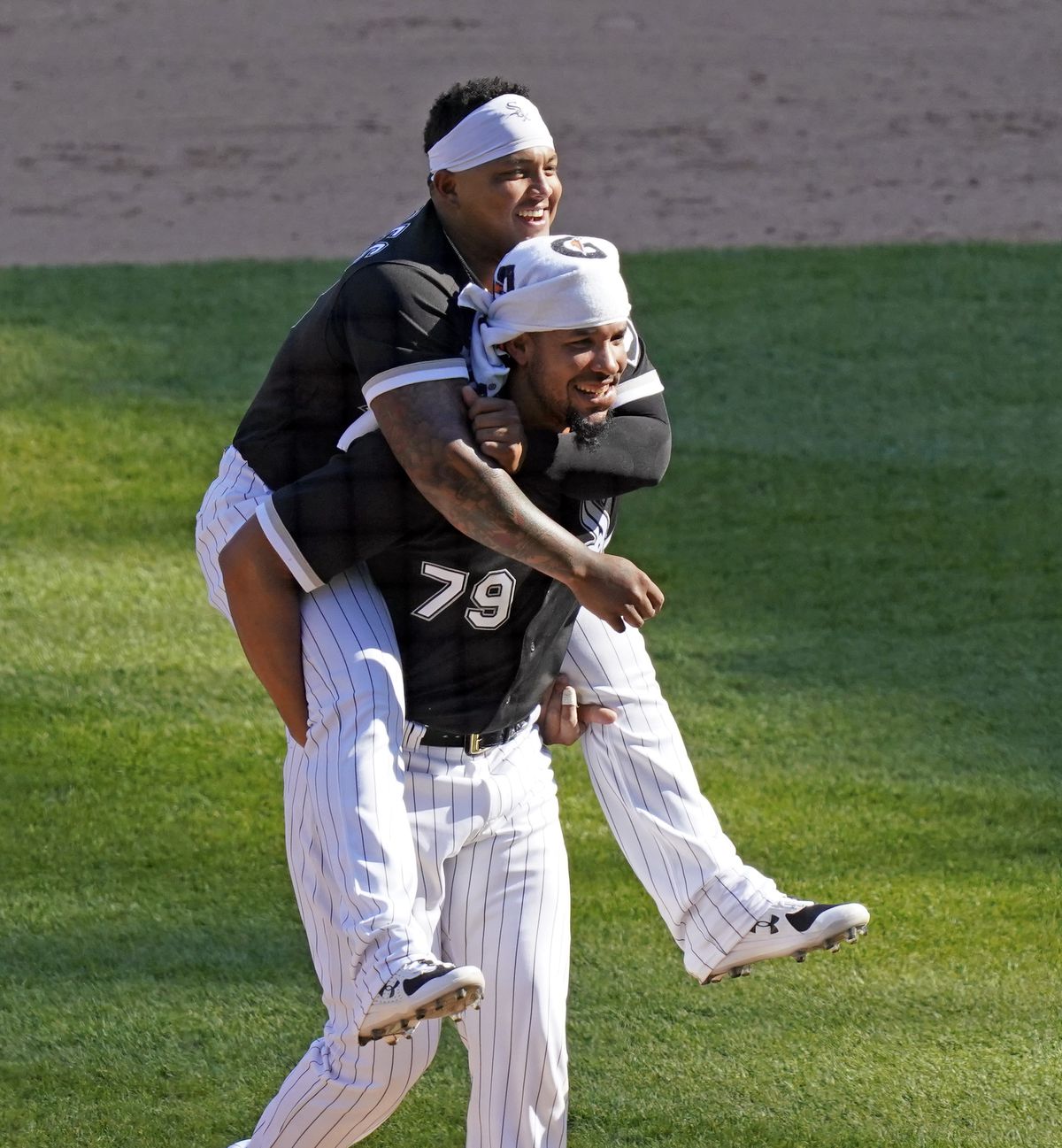 On May 17 in Minneapolis, White Sox rookie Yermin Mercedes stepped in it with manager Tony La Russa, a man who holds fast to a baseball code that might be described as primeval, antediluvian or, at best, old-school in a sometimes uncharming way. Perhaps you heard about the flap that ensued, with the cocksure La Russa, 76, publicly taking his ebullient, 28-year-old designated hitter to task for his irreverence.

That was sarcasm, folks. Of course you heard about it. You probably squawked about it, one way or the other. Everybody picked a side after Mercedes missed a take sign with the Sox leading 15-4 in the ninth inning and whaled on a 3-0 pitch from Twins position player Willians Astudillo, prompting a highly controversial apology to the Twins from La Russa that some fed-up Sox fans have no intention of letting the Hall of Fame skipper live down.

But we’re not here to relitigate the past. Maybe La Russa is correct and Mercedes essentially will adopt his manager’s views on what constitutes good and bad sportsmanship. Or maybe six words from Mercedes speak to just how unlikely that is:

And who is that?

A boy who loved to play baseball from age 4 in the Dominican Republic because it meant being with his father and grandfather, but who secretly loved basketball even more and still fancies himself a shooting guard with unlimited, if completely uncorroborated, range.

An 18-year-old in 2011 who signed with the Nationals as an international free agent, saw bright lights and dollar signs in his future and then, the day he was released after three seasons in the organization, told his father he was quitting the sport. The elder Yermin promised him: “Your moment is coming.” Mercedes picked up the pieces for a year in independent ball before, in 2015, beginning a steady, if at times painfully slow, ascent through the Orioles’ and Sox’ organizations.

And these days, a recently married man — to Alejandra last year — who happens to have a Valentine’s Day birthday and won’t argue with the notion that he must be a born romantic.

Mercedes has a smile that makes others smile, a laugh that makes others laugh, a warmth that makes others feel warm and, at 5-11 and 245 pounds, a wonderful, terrifying penchant for jumping on the backs of teammates in celebration of Sox victories. And before we forget to mention it, there’s also his seemingly magical bat. A suddenly enormously popular Sox player, Mercedes — who entered the weekend atop the American League batting race at .340 — hasn’t stopped raking since Opening Day, when he became the first major-leaguer in 88 years to collect five hits in his first career start.

Dial it back? Rein it in? This guy?

Don’t try selling that to Sox tone-setting star Tim Anderson, who fully approved of Mercedes lingering at the plate and watching a 485-foot home run fly a week into his torrid start to the season.

Everyone’s got a story

Anderson understands how Mercedes ticks. La Russa might have a ways to go. General manager Rick Hahn’s first taste of Mercedes came in 2017, heading into the Rule 5 draft in December. Senior director of baseball operations Dan Fabian popped into Hahn’s office with reports on a catcher in the Orioles’ system who was in Double-A and would be left unprotected. It would cost the Sox only $24,000 to snare Mercedes, and they needed organizational depth at the position.

Scout John Tumminia had raved about Mercedes after seeing him play during the past season for the Bowie (Maryland) Baysox. Later, in the Dominican, senior adviser to scouting operations Doug Laumann went to see Mercedes play with his winter-ball team, Tigres del Licey, and was impressed by his skills. In Hahn’s office, Fabian pulled up a YouTube video of a “mammoth” winter-league homer, as Hahn remembers it now, followed by a “colossal” bat flip.

“I just want to be sure you know this is what we’re getting,” Fabian told Hahn.

The reports on Mercedes included concerns about instances when he had turned off teams — starting in the Nats’ system — with what might be described as a combination of overconfidence and a tendency to take his foot off the gas pedal and coast.

“Our guys were aware of some of the question marks that were on him,” Hahn says. “They seemed to all be rooted in questions of maturity and the seriousness with which he took his craft.”

The Sox sent Mercedes to High-A Winston-Salem for the 2018 season and put him under the watchful eye of former big-league catcher Guillermo Quiroz, who was just breaking into coaching. Quiroz — since named manager at Low-A Kannapolis — took to the prospect and vice versa. Quiroz told Mercedes some point-blank things he needed to hear, and a trust developed.

“There had probably been some things that happened, whether it was unprofessionalism, a lack of diligence, maybe attention to the demands of the sport not being up to par,” Sox assistant general manager/player development Chris Getz says. “But we don’t really care about the past, and we want our players to feel that. Some guys just need more structure and help than others.”

Mercedes has been used almost strictly in a DH role, his catching still rough around the edges and certainly the area where his younger self cut a few corners. But the Sox haven’t given up on him behind the plate. They like his framing and throwing more than his pitch-blocking and focus. Getz says he thinks Mercedes will catch for the Sox “at some point.”

As for any other concerns?

“I can’t say there haven’t been a couple of side conversations, a couple of closed-door meetings, but that’s OK — that’s our job,” Getz says. “If players didn’t need those conversations, perhaps we wouldn’t need our jobs. I’m proud of the development of Yermin, without question. It certainly hasn’t been push-button, but it has worked so far.”

Notably, Mercedes has been suspended twice by Tigres del Licey during his time under the Sox’ umbrella: in 2019 for leaving unannounced before a game and in 2020 for violating COVID-19 protocols. He also arrived late before a game at Guaranteed Rate Field this season and was pulled from the starting lineup. All the while, though, he has taken advantage of every opportunity the Sox have given him, rising from Winston-Salem to Double-A Birmingham and then Triple-A Charlotte in 2019.

Along the way, he has charmed those in his path by being — who else? — Yermin. For Getz, a memorable, hilarious interaction occurred shortly after Mercedes arrived in Arizona for his first Sox spring training. Getz approached with a handshake and a friendly reminder of whom he was. Mercedes replied as perhaps only he would: “Can you help me get my Instagram verified?”

“That was the first time someone had come to me and asked if I could help certify him,” Getz recalls mirthfully. “I said, ‘Yermin, I have no idea about that.’ That definitely shed some light on Yermin out of the gate on what we were potentially dealing with here.”

Hahn has a Mercedes story — this one more observational — that might be even funnier and, frankly, is kind of adorable. Early in the abbreviated 2020 season, the Sox played a doubleheader in Cleveland. Teams traveled with their taxi squads, so Mercedes was there to work out with the team, take batting practice and eventually watch the action from a designated area in the stands at Progressive Field.

Before Game 1, Hahn hit a concession stand and looked into the stands where taxi-squad players were seated. All were in street clothes except for one — Mercedes — who donned the same gray road jersey the team on the field was wearing. For Game 2, the Sox wore their road blacks, and guess what Hahn saw as he grabbed dinner? Mercedes had swapped jerseys, too.

“I mean, that innocence combined with enthusiasm for being part of the team?” Hahn says. “That was his first time traveling with the club, and it said a lot.”

There’s a sizable list of major-leaguers from La Romana — including ex-Cubs Antonio Alfonseca and Felix Pie and ex-Sox Danny Richar — but Mercedes’ favorite was a slugger 10 years his senior: Edwin Encarnacion. When the Aguilas Cibaenas, Encarnacion’s winter-league team, were in town at Estadio Francisco Micheli, the Yermins — father and son — never missed it.

So imagine the excitement Mercedes felt in his first big-league game on Aug. 2, 2020, at Kansas City. Encarnacion was the DH and had one of his mere five multihit games during a terrible season. Mercedes got his first at-bat and grounded out. Stealing the show was rookie Nick Madrigal, who collected the first four hits of his career. Mercedes was reunited with the taxi squad in Schaumburg when it was over, his one-at-bat season finished as though it hadn’t even happened.

“It was hard,” Mercedes says, “because we try to stay [in the majors] all the time. But they told me, and I was like, ‘Oh.’ It was weird.

“But I was in the dugout, and I see Madrigal go 4-for-4? That’s really great because, you know, when you do that, you’re so excited in that time. I’m proud because I saw him connect for the four hits.”

How wild that Mercedes one-upped that performance a year later with five hits in his starting debut? And that he started 8-for-8 this season, the only player to do that in the modern era? And that he has stepped into the DH shoes of Encarnacion, his idol, and given the Sox 10 times the fun and excitement of an occasional “Parrot” home-run trot?

After his monster debut in Anaheim, California, which also included four runs driven in, Mercedes’ head was swimming. In the clubhouse, he thought about — among other things, seemingly all at once — his release from the Nationals. He thought about how worth it all the years trying to make it to the big leagues had been.

“I thought one day I was going to be a good player, but things happen all the time,” he says. “They gave me my release, and I just continued working hard. Don’t put the head down. Just be prepared and keep working hard for everything.”

He has swung his way to prominence, become as important to this Sox season as any hitter in the lineup and found a home full of promise.

Mercedes met Alejandra in New York a few years back. He went to Orlando, Florida, to meet her family. Her family traveled to meet his. They got married in a boat on the Atlantic and found a sweet place in Chicago.

“It’s very nice in Chicago,” he says. “A little cold, but Chicago is beautiful. I love Chicago. We’ve got a beautiful thing here, a beautiful place to enjoy, and we’re feeling great here.”

All that’s left to do is keep being, well, who else?

Like a 3-0 meatball against a division rival. But just wait until the stakes are higher for the first-place Sox.