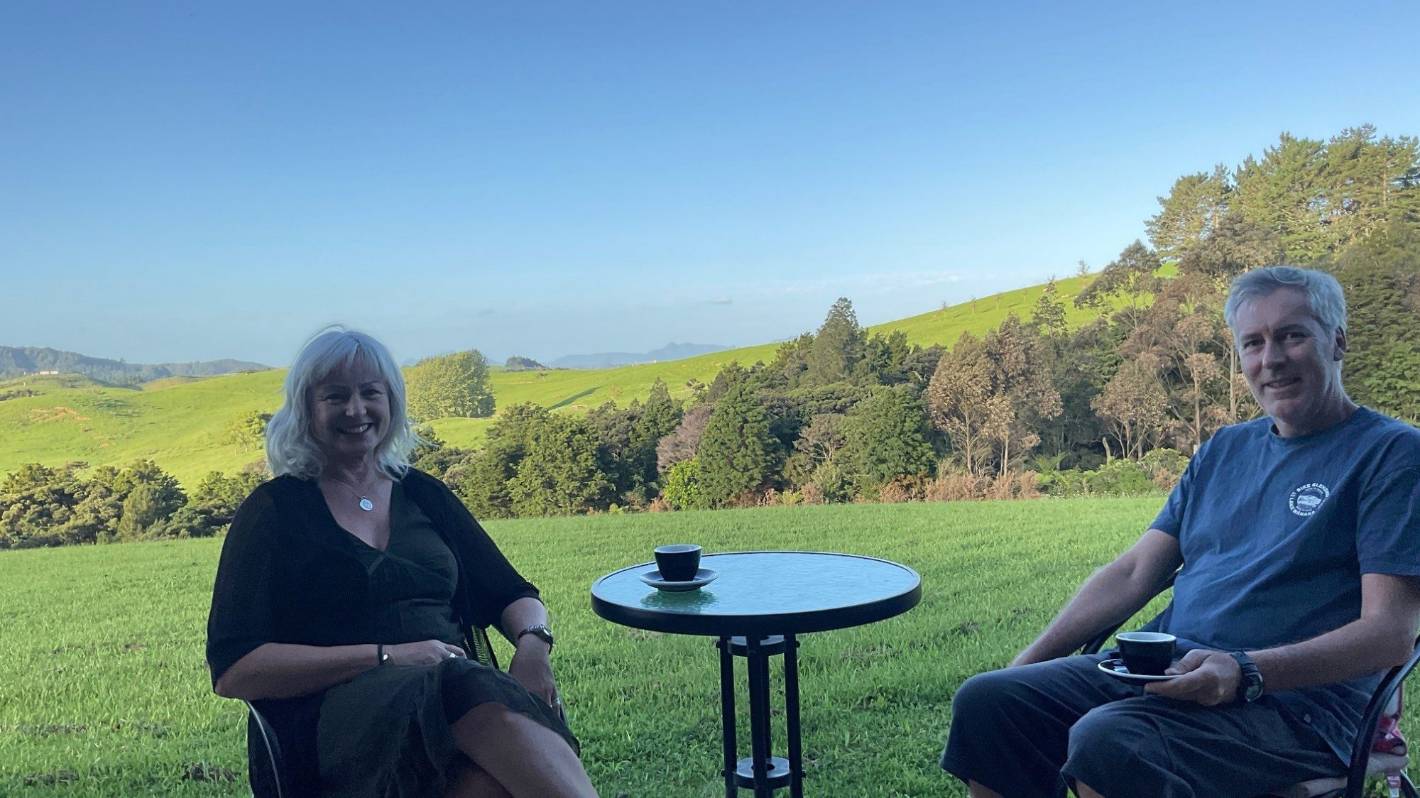 Sandra Palmer and Paul Cogswell enjoyed their time at their Waipū property in the first lockdown, in 2020. When they thought of returning to Auckland, their hearts sank.

Then a friend asked, “Well, why do you have to?”

“Maybe we don’t,” they thought. And so began a flurry of activity – the family home in Grey Lynn was sold, and a townhouse bought instead as a city base.

Their main home is now the relatively small two-bedroom-plus-studio home they built on their 10 acres just out of Waipū a few years ago.

READ MORE:
* Aotearoa’s best small towns for every type of summer holiday
* Five of the best dog-friendly destinations for summer
* This 1960s fishing lodge got a serious glam-up, complete with 540-bottle wine cellar
* Change… could do you good

The Waipū house is 96sqm plus deck, smaller than their former Grey Lynn home, which was 160sqm. But in Waipū, there’s 4 hectares to spread out in versus 488sqm of land in the city. They also have a caravan on the land, with views to the sea, which they have owned for around 16 years.

“We had the big family home in Auckland – now we’ve got a small two-bed townhouse (in town) and this is our home, we’ve switched,” says Palmer.

The couple already worked from home frequently, which they’ve continued. They spend a night or two in town a week. Grey Lynn is 100 minutes from Waipū – on a good day.

Palmer believes more and more people are doing the commute to Auckland. “Monday morning at 4.30 or 5am, Waipū is like a main street.”

It’s a completely different lifestyle when you live in your holiday house, says psychologist and yoga teacher Palmer.

“When we came on weekends, we didn’t want to leave when we arrived, we’d be so tired. Now we’re actually settled here, we say: ‘Shall we go out?’”

The couple have a connection with Waipū. Palmer spent her later high school years in Bream Bay, her parents and sister still live in the area, and Palmer’s niece runs a local coffee spot, Little Red coffee.

In their mid 50s, Palmer and Cogswell, a barrister, are taking up all kinds of activities in their spare time – Palmer is learning to surf, they both enjoy twilight golf at the local golf club (they’re the youngest there), and they’re members at the local RSA, which, they say, does a very good steak and chips.

“At the RSA you can see big families gather, it’s a meeting place,” says Palmer. “A lot of people who come into Waipū live rurally. You see people for a bit, and then you go back to quiet and space,” she adds.

Friends often come up at the weekend, but there are more quiet evenings than their old life.

They may go out on a Friday night, but not Saturday. Palmer says she may spend Saturday afternoon gardening, then have a bath or spa and get into her jammies and have an early night.

In a smaller space, they’re living more simply. The wardrobe is not big enough, says Palmer, but they’ve got a caravan, and another bedroom. Part of the shed has been converted into a yoga studio.

“We love it. The caravan becomes the love shack – whoever is having the hottest romance at the time has it, and then there’s a second double bedroom, and a sofa bed in the studio. And there are always tents,” says Palmer, who likes camping.

“We’re all outside, having picnics at the beach. Once a year I wish we had a bigger house,” says Palmer.

Some might find having 4 hectares a lot to bite off, but they get hay made four times a year from their land, which pays the rates. Cogswell enjoys his John Deere tractor to mow the lawn. They have no neighbours – just space, quiet and birds, says Palmer.

Does she miss anything about the city? Yes – the ukulele. Palmer is in a group in Auckland that get together most Wednesday evenings – she’ll be going back once week, as long as Covid-19 rules allow.

“People say, ‘Don’t you miss the city?’ But I wasn’t going to the theatre or movies.” If there’s a birthday party or a special dinner, they’ll drive down.

“You’ve got to be happy in your own company,” she adds, as people “don’t just drop in”.

Moving to the bach – for the second time

Ad agency director Kim Ellison and her partner Pete Fleming bought their home in Napier’s Westshore about five years ago.

They sold their home in Kingsland, Auckland, and moved to the Hawke’s Bay, with Ellison, working remotely.

But she was soon needed back in Auckland, so they rented the home out and moved to a unit in Point Chevalier, all the time thinking wistfully of their Hawke’s Bay base.

The return to Auckland never felt right, says Ellison, who grew up in the Tararua district. So she started to look for a job in Hawke’s Bay, finding one with property development company TW Homes.

The lifestyle is what Ellison and Fleming love. “Even in winter, it’s sunnier here, It’s why people are not as depressed – it’s still sunny, even if it’s cold.”

Nothing seems far and there’s no traffic, she adds.

She says they now have friends seriously asking them to keep an eye out for properties.

Their 150sqm home was built originally in the 1920s, then was added to in the 2000s. The previous owner put in a studio, which they’ve made into the master bedroom.

“It needs heaps doing to it,” says Ellison. “Pete likes a project.”

The couple have made good friends in the area, helped by their sociable dog, Jedi. The neighbours on Charles Street are fabulous, says Ellison. “People make time to chat in the Hawke’s Bay.”

Ellison’s office is right by Ahuriri Beach, and she walks there from home in just eight minutes.

She gets up to 6am most mornings to take Jedi for a walk on the beach and rising early allows her to do some early writing. She also walks with a friend around Pandora Pond a couple of mornings a week.

“Every day feels like a holiday. I’m working hard, as hard as in Auckland, but I feel so lucky to be here.”