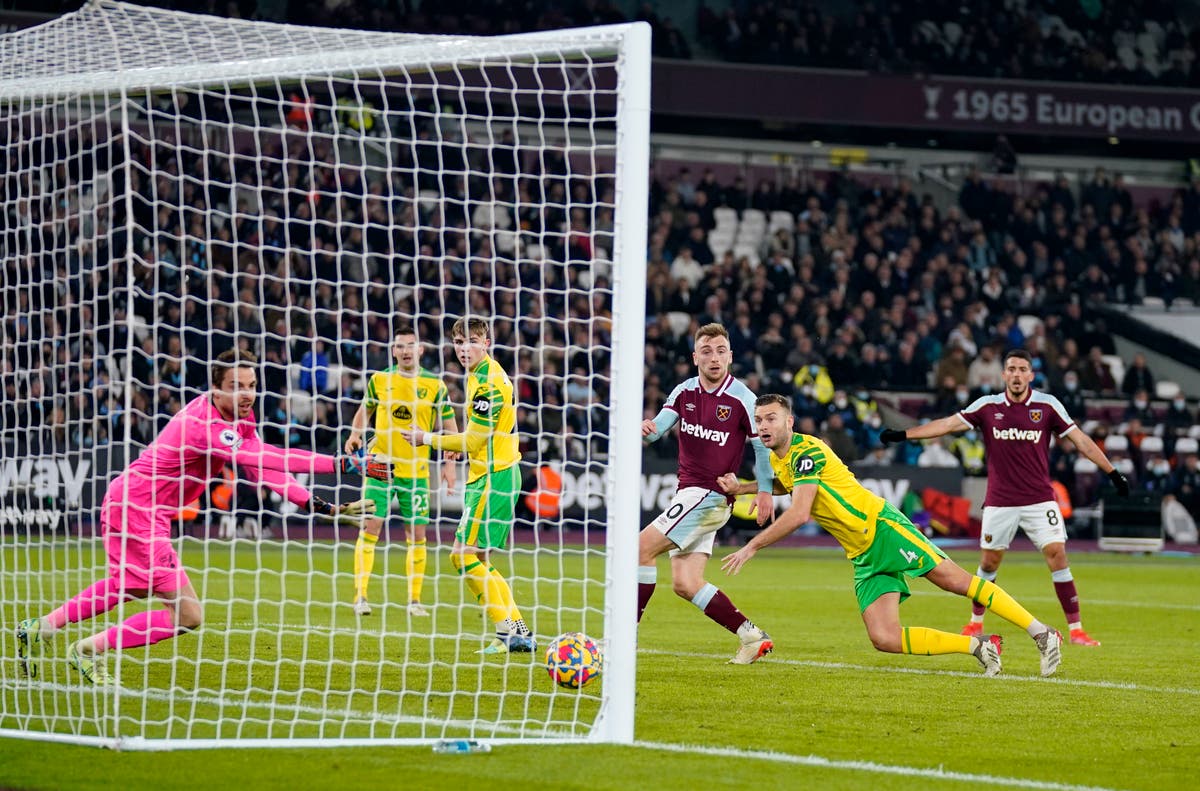 The game was originally due to take place on December 18 last year, but was called off because of a coronavirus outbreak in the Norwich camp.

The Canaries have not played a league game since December 28, but managed to shrug off any rustiness to beat League One Charlton in their FA Cup third round clash at the weekend.

West Ham also eased into the fourth round with a comfortable 2-0 win over Leeds in their all-Premier League tie and are looking to make it four wins on the bounce in all competitions, having seen off Watford and Crystal Palace in the league before that.

Both of those successes came on the road, meaning David Moyes’ side are seeking a first home triumph since beating Chelsea at the start of December.

David Moyes’ side are back in the top four!

Jarrod Bowen at the double, as he produced a sensational performance to lead the Hammers to the win.

It was slightly nervy until that second goal, but it’s a job well done for West Ham.

90 mins: Yarmolenko, on for Antonio, has a shot beaten away by Krul. He’s desperate to get on the scoresheet here.

Three minutes to be added on, and West Ham can enjoy them.

Incredible. Cresswell pulls a shot and it falls to Antonio completely free a few yards out.

He takes an age to eventually shoot, and Krul gets across to save. The offside flag then eventually goes up.

Jack Rosser at the London Stadium

Bowen is more than deserving of that second goal. He’s been a menace all night and has done his work defensively too. The winger just keeps getting better at the moment.

Or is he? VAR checking… this is really tight. Aarons tracked back and his foot may well be playing Bowen onside. HE IS!

Jarrod Bowen has his second of the night. West Ham surely have the three points secured.

82 mins: West Ham happy to keep possession, not too much pace to their play at the moment.

Play it back to the centre-backs, and all the way to Fabianski. Long ball drops to Lanzini and West Ham are back on the counter.

Wide to Masuaku, into the box… BOWEN TAPS IN!

But he’s offside again! He’s going to have another one ruled out.

80 mins: Good from Coufal to step out of defence and stop a Norwich attack, but West Ham give it straight back.

Tense atmosphere at London Stadium. Fans know this one is still in the balance.

Fornals does brilliantly to play Masuaku in on the overlap… makes a complete mess of it and blasts it out of play.

78 mins: Here comes a change for the Hammers.

Vlasic off, Masuaku on. Moyes looking to see this one out without late drama.

Unfortunately for him and Norwich, the striker has slipped and is lying on the floor as he watches the pass roll away.

75 mins: 15 minutes to go and while West Ham have created plenty tonight, the lead is still only one goal.

Moyes will know his side are still vulnerable to a late sucker-punch. Idah brought off by Dean Smith… travelling fans aren’t happy about that.