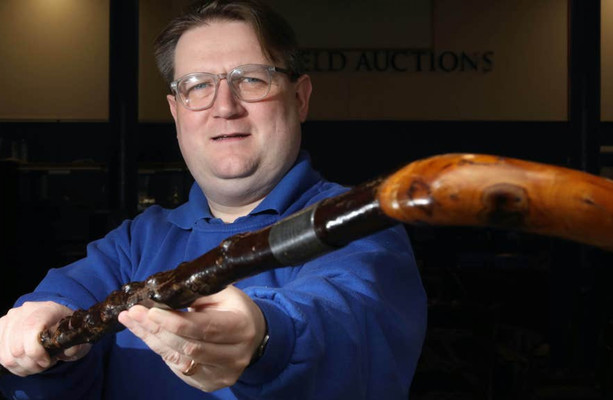 A WALKING STICK once owned by the North’s first prime minister is set to go under the hammer in Belfast.

It comes in the year that Northern Ireland marks its centenary.

The auction next week also comes after a walking stick which once belonged to republican leader Michael Collins sold for more than €60,000.

Bloomfield Auctions said James Craig’s walking stick was bought by a private collector in England a few years ago for approximately €40.

However, managing director Karl Bennett believes it could sell for between €4,500 and €5,500 at next week’s auction.

It is described as being made from blackthorn wood, and accompanied by a silver collar to commemorate Craig’s first public visit to Lurgan in 1925.

Also up for auction is a medal which was presented by Craig from Spa Golf Links in Co Down, believed to have originated from the 1910s to the early 1920s.

Bennett said they were delighted to offer significant historical items for sale.


“Our auction house is synonymous with history and exploring the past and these items are no different. It’s amazing to have items with such historical significance to Northern Ireland, especially 100 years on from the country’s formation,” he said.

“The blackthorn walking stick is accompanied by a silver collar emblazoned with the words, ‘presented to the Rt Hon Sir James Craig Bart D.L. on the occasion of his first public visit to Lurgan 1-4-1925′.

“The walking stick would be perfect for someone with a particular interest in history to add to their collection. Similarly, I think museums and some political parties also may be interested in acquiring it.

“Like many of the items we auction here, this walking stick is steeped in history and undoubtedly has a phenomenal story to tell.