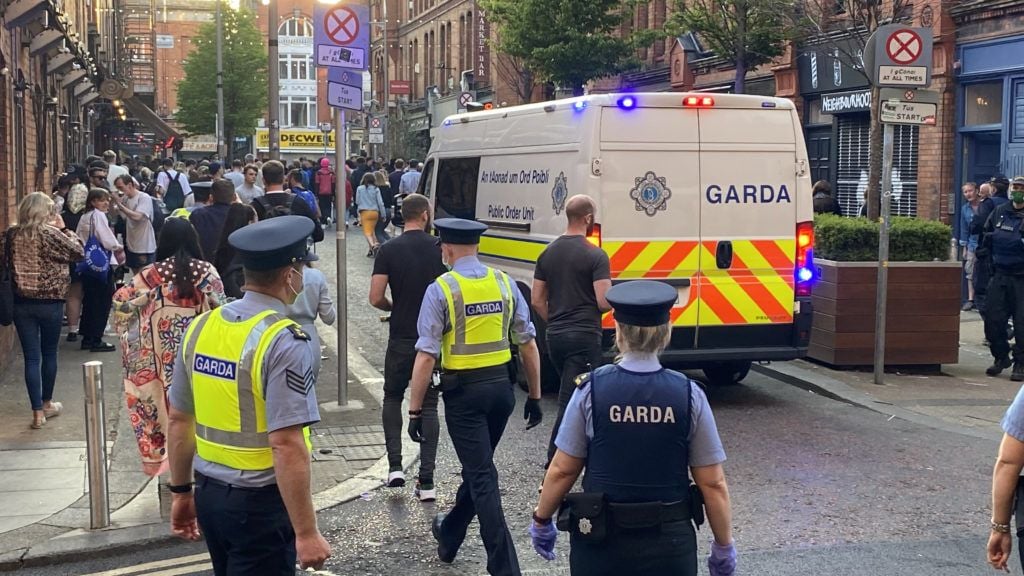 Tánaiste Leo Varadkar has ruled out a fast-tracked reopening of hospitality after crowds of people gathered on city streets in Dublin, Cork and Galway over the weekend.

Outdoor hospitality businesses such as bars and restaurants are set to reopen from Monday, June 7th.

There is concern the upcoming June bank holiday weekend could see a repeat of the scenes amid the continued closure of hospitality, with Fianna Fáil TD Cormac Devlin calling on the Government to consider reopening outdoor hospitality ahead of schedule.

“Concerns have rightly been raised about the lack of access to public toilets and bins at various locations which ultimately led to significant amounts of litter being discarded on our streets,” Mr Devlin said.

“I am of the view that the solution lies in the reopening of outdoor hospitality ahead of schedule whereby people could safely socialise in a controlled setting with access to the facilities on site.

“The message is clear, please socialise outdoors, surely the onus is now on the Government to facilitate the safest possible environment to do so,” he added.

However, Mr Varadkar told Newstalk radio that the Government had decided against bringing the reopening date forward for outdoor dining and drinking.

“The decision is Monday and that’s what’s going to happen. That’s the Cabinet decision on that and you know we did toy with that possibility but we’re not going to change it now,” he said.

“It does appear that the weather is not going to be so nice this weekend unfortunately but that’s probably a good thing in terms of people congregating outside.”

He continued: “I didn’t like to see the scenes that we saw in South William Street the other day, or some of the problems that they’ve seen in Cork or places like Portobello Plaza but we shouldn’t lose sight of the fact that we are actually encouraging people to be outdoors.”

Mr Varadkar said he believed the majority of people were continuing to follow public health guidelines.

“The vast majority of people I think, 90 per cent of people, 90 per cent of the time, are following the guidelines – they’re meeting up in back gardens in groups of no more than three households, and if they are meeting in parks they’re keeping the numbers pretty small.”

Dublin City Council will meet with stakeholders this week to see if additional measures are needed in the wake of the unplanned public gathering in the city.

The Government has said the plans for reopening this summer remain on track but will be kept under review.

A further 378 cases of Covid-19 were confirmed by the Department of Health on Monday.