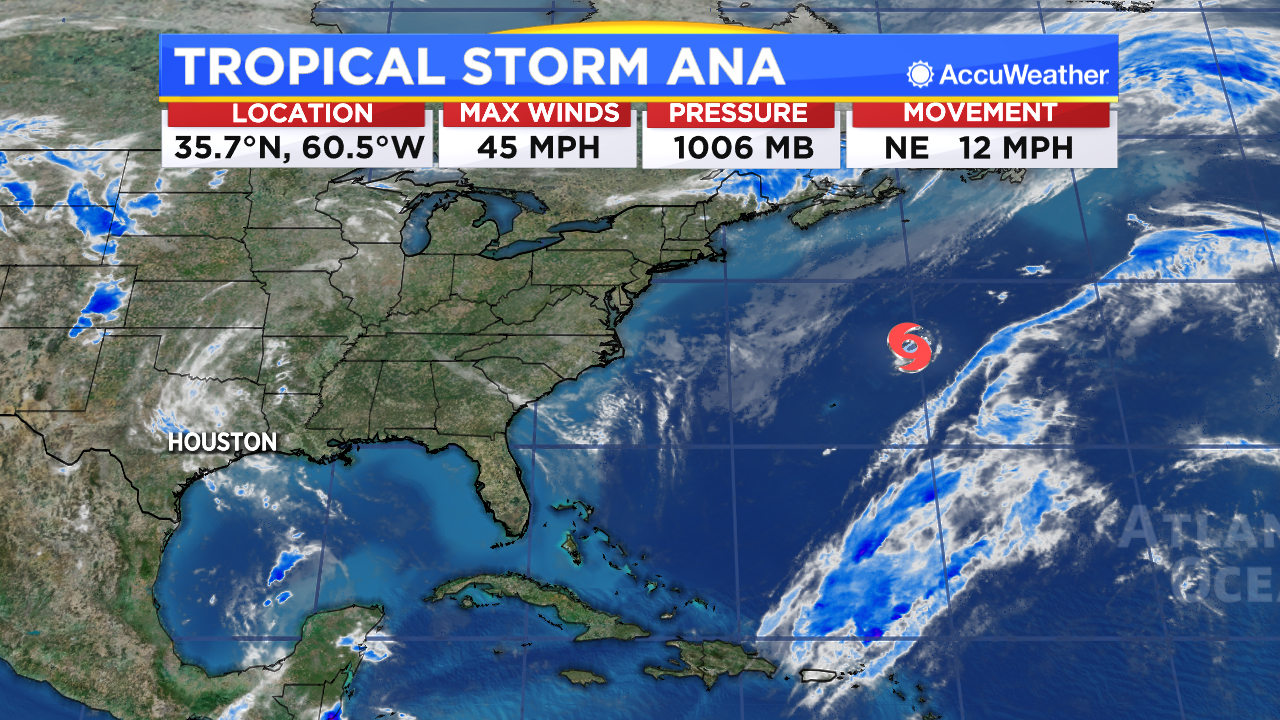 No tropical development is expected as the Atlantic hurricane season kicks off tomorrow.

However, in the Eastern Pacific Tropical Depression Two-E is expected to strengthen into a tropical storm within the next 24 hours as it drifts south of Mexico. This system is expected to remain below hurricane strength and eventually fall apart as it moves over cooler water.

A tropical wave is just west of Two-E and has a slim chance for tropical development during the next five days.

There are no areas of concern for development for the next 5 days in the Atlantic, Gulf or Caribbean.

Ana has dissipated and no tropical development is expected during the next five days.

11 p.m. update
Ana is now a post-tropical cyclone and should dissipate Monday as it moves northeast farther out into the Atlantic.

3 p.m. update
Ana has now been downgraded to a tropical depression with 35 mph winds. Ana is forecast to become a remnant low by tonight as it moves northeast out farther into the Atlantic.

12 p.m. update
Ana is barely holding on as a tropical cyclone in the Atlantic as it churns around 425 miles northeast of Bermuda. Ana’s maximum sustained winds were around 40 mph Sunday morning and was moving northeast at approximately 14 mph. An increase in forward speed was expected in the next day or so. Tropical storm-force winds extended outward up to 35 miles and there are no impacts to land. Ana is expected to weaken and dissipate by Monday.

5 a.m. update
Still plenty of moisture in SE Texas from the disturbance that moved through early Saturday morning, with light rain expected in Houston and heavier rain to our southwest. Elsewhere, 340 miles to the northeast of Bermuda our first named storm, Ana, continues to gradually move northeast over open water. Ana will not make landfall anywhere, and will dissipate early next week.

11 p.m. update
The tropical disturbance that brought us our rain chance today continues to lift to the north.

Subtropical Storm Ana formed early Saturday and is now making its way northeast out to sea in the Atlantic. It is currently 270 miles northeast of Bermuda and is moving northeast at 9 mph. Ana currently has sustained wind speeds of 45 mph but is expected to weaken over the next 24 hours… eventually dissipating by Monday.

1 p.m. update
Our tropical disturbance responsible for bringing showers to SE Texas today continues to spin through the Hill Country. The moisture that it continues to pump into our area has produced widely scattered showers, especially west of I-45.

SubTropical Storm Ana, our first named storm of the season, is lifting away from Bermuda and poses no threat to land.

10 a.m. update
Subtropical storm Ana formed in the Atlantic Ocean early Saturday, according to the National Hurricane Center. Ana was located about 200 miles northeast of Bermuda Saturday morning with maximum sustained winds of 45 mph. The system was expected to continue its slow and erratic motion, and then dissipate in a few days, forecasters said.

Here in the Houston area, the Gulf tropical disturbance continues to weaken and move to the north-northwest. Outer rain bands will continue to impact the Houston area today. A wind advisory has been extended for the Bolivar Peninsula, coastal Jackson, Matagorda, Brazoria and Galveston Island until 4 p.m. Coastal flood advisories continue for Chambers, coastal Brazoria, Galveston and Harris counties until 7 a.m. Sunday.

7 a.m. update
The National Weather Service has issued flood warnings for several rivers and streams across the region as rain-swollen banks continue to be impacted by scattered showers today. Impacts from the disturbance continue to include locally heavy rainfall, breezy conditions along the coast, elevated tides and marine hazards. The center of the system should push northwest throughout the day. The highest rain chances through noon should be along and west of the Brazos River. Those rain chances will expand across the area later today.

5 a.m. update
The disturbance in the Gulf moved inland near Port Lavaca, and the National Hurricane Center doesn’t expect any more development. Locally, our impacts remain unchanged from prior updates, scattered showers and storms with breezy 30-40mph wind gusts possible, especially along the coast. The NWS has issued a Coastal Flood Warning through 7 a.m. for our coastal communities.

In a much different part of the world, northeast of Bermuda, we now have our first named storm: Subtropical Storm Ana has formed. This storm will have no direct impact on land, and is only notable for being our first named storm of the year, arriving before hurricane season officially begins. 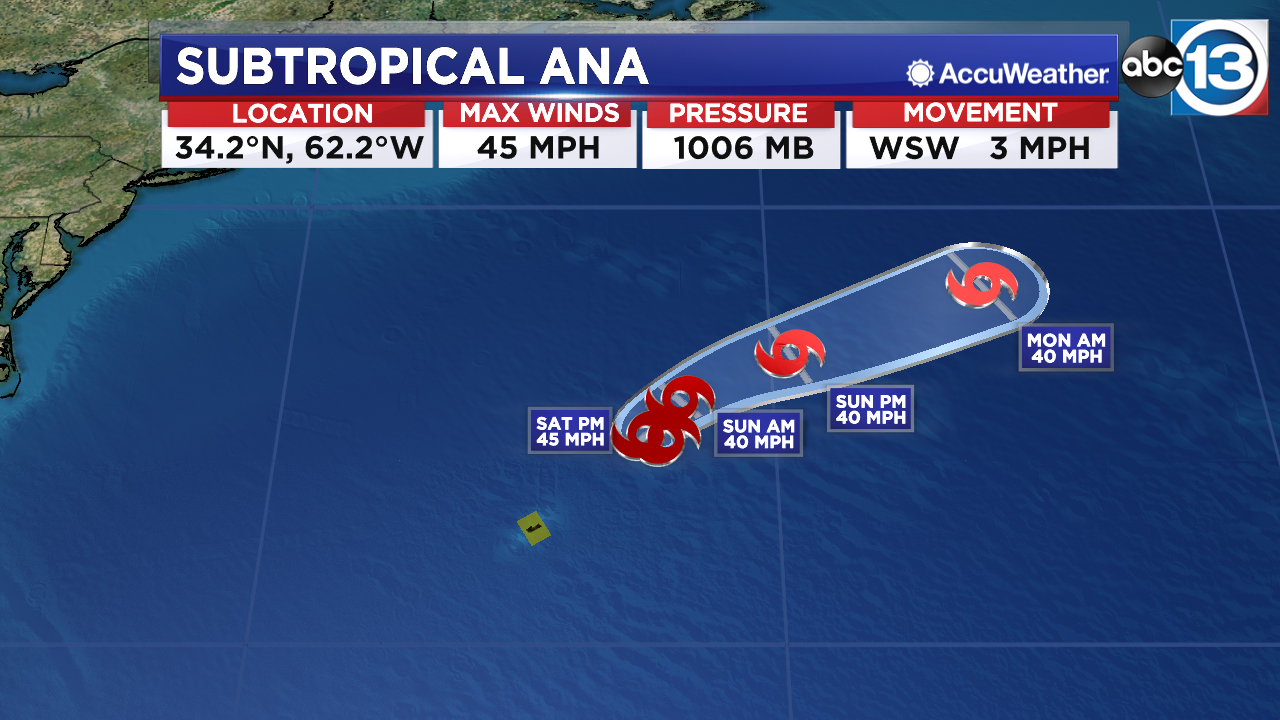 1 p.m. update
The NHC is now giving the disturbance in the Gulf a 30% chance of development (becoming a Tropical Depression or Tropical Storm).

The impacts in our area will be minor regardless of development. We can expect scattered showers and storms along with wind gusts over 30 mph overnight and through Saturday, with rain tapering off from east to west on Sunday.

Still, if it makes landfall in Texas at tropical depression or storm strength, it’ll be the first in recorded history to do so before June 1, the customary start of the Atlantic hurricane season.

1 p.m. update
A large area of thunderstorms in the western Gulf is drifting northwest towards the Texas coast.

Conditions are slightly favorable for development and the National Hurricane Center is giving it a 60% chance. Whether it develops or not, it’ll give us at least scattered, heavy downpours overnight and through the day on Saturday.

High rain rates along with the slow movement of the storms means some flooding will be possible. Gusty winds and coastal flooding may also be an issue near the coast.

According to the latest NOAA outlook, the 2021 Atlantic hurricane season will be busier than normal, but it’s unlikely to be as crazy as 2020’s record-shattering year.

Hurricane season runs from June 1 through November 30, although storms can form before and after those dates.

During hurricane season, remain prepared and make sure you download our ABC13 Houston app!