Health experts are urging immediate changes to protect inmates, staff and the wider community. Māori, who make up over half of the prison population, are especially vulnerable, reports Charlotte Muru-Lanning.

On Monday, the Department of Corrections announced three confirmed Covid-19 cases within Mt Eden prison. While New Zealand has so far avoided any large-scale Covid spread in prison, the new cases shine a light on prison vaccination rates. Public health experts say those rates remain too low, particularly for Maōri.

Data provided to The Spinoff through the Official Information Act indicates the unsettling Māori vaccination rates seen across the country are mirrored within Corrections facilities. As of 19 September, 2415 (57.8%) of the 4,176 Māori in prisons had a first dose of the vaccine and just 980 (23.5%) had received their second dose. On the same date, 51% of the overall eligible Māori population had received a first dose and 24.8% were double jabbed.

Among the “other” (non-Māori and non-Pasifika) population in prison, 66% had their first vaccination and 33% had their second.

Collin Tukuitonga, associate professor of public health at the University of Auckland, said that while Māori vaccination rates at this point were slightly higher than the rates of the overall Māori population, “these figures are pretty low for protecting people in a high risk environment”. It’s in this kind of environment, he said, that “delta loves to spread”.

There have been six Covid-19 cases detected in our prisons since the pandemic began, none of which has led to a major outbreak. But as the United States and the United Kingdom have shown, prisons have the potential to become major incubators of Covid-19, owing to living conditions that can fuel outbreaks both within and beyond their confines.

In the US, the 15 largest outbreaks within the first six months of the pandemic were based in prisons. In Australia, where cases of Covid-19 are surging, a youth corrections officer died this week from the virus.

Prison environments offer a perfect set of conditions for transmission – overcrowded, often unsanitary, inadequate ventilation, shared cells, poor access to healthcare and disability services. There is evidence of similarities here in Aotearoa, with the ombudsman’s 2020 report into Waikeria prison revealing small, poorly-ventilated cells, old buildings with little natural light, stained bedding, and dirty water for bathing and drinking. Half of those incarcerated there said they struggled to see a doctor. Three quarters said their mental health was unsupported.

IMAGES FROM THE OMBUDSMAN’S FINAL REPORT ON AN UNANNOUNCED INSPECTION OF WAIKERIA PRISON, AUGUST 2020

Rachel Leota, national commissioner of correctional services, told The Spinoff that Corrections’ record showed it was well placed to deal with the Covid threat. “All six cases have been people entering prison unwell – with no cases of transmission to others. This shows that our significant efforts our staff are taking to keep those we manage safe from Covid-19 is working,” she said. Corrections have taken extra safety measures such as enhanced cleaning procedures of escort vehicles, a requirement for prison staff to wear masks, thermal cameras on entry, and prisoners are being provided with PPE, she added.

As study after study has shown, that situation is the result of many decades of colonisation. Confiscated lands alienated Māori from their economic bases and cultural ties. Native schools restricted Māori to low paid and insecure employment. The abuse in state care-to-gangs-to-prisons pipeline has been well-established. This is the kind of disadvantage that breeds overrepresentation in the criminal justice system. To top it off, bias from police and juries mean that Māori are more likely to end up with arrests and prison sentences.

The Corrections vaccine rollout began in May this year. But by June 11, the department was advised that a decision had been made by the Ministry of Health to slow the rollout in order to manage stocks of the vaccine in the lead-up to new deliveries. Corrections paused the rollout to people in prisons on Monday June 14, resuming it in late July.

The most recent Corrections data, which is updated regularly, showed 64.8% (5,170) of our current prison population have received their first dose of the Covid-19 vaccination and 38.6% (3,083) have received their second dose. The rate of incarcerated people who are fully vaccinated remains low, even lower than the wider population.

While vaccine mandates were announced for healthcare and education workers in Monday’s press conference, there remains no vaccine mandate for police or Corrections workers.

Donna Cormack (Kāti Mamoe, Kāi Tahu), a senior lecturer in public health at the University of Otago, said there has been a consistent lack of transparency on how the data from Corrections is collected which, paired with an unstable and constantly shifting prison population, creates complications and raises questions of accuracy.

“There have been known quality issues in the past,” she said. “It’s a highly coercive environment, so people are not really volunteering information at that point.”

Spokesperson Rachel Leota said Corrections is currently using the same methods of Covid-19 data collection as the Ministry of Health. “All vaccinations are administered by trained health staff in prisons and are centrally collated and sent to the Ministry of Health for inclusion in the daily statistics,” she said.

On why ethnicity vaccination breakdowns are not made publicly available, Leota said Corrections “must weigh up the time and resources required to collate and assure this information, compared to what staff would be required to stop doing in order to do so.”

Cormack believes this data is crucial for Māori researchers and community providers to plan and respond. In the middle of a pandemic, she said the 20-day wait time for information through the OIA process is not good enough, “especially in a relatively fast moving context”.

“I still think it’s ridiculous that we’re doing OIAs all the time for basic information,” she said.

Higher alert levels and lockdowns have already seen an erosion of conditions for those in prison. Prison confinement spiked overseas throughout the pandemic and in the first Covid-19 wave in Aotearoa. “As we move from elimination to suppression, there is a real risk that if Covid-19 spreads within prisons, the breach of peoples’ rights will increase, as prisons are not designed to keep people well,” Cormack said.

In a lockdown, most people can still access fresh air freely, maintain unfettered digital contact with whānau and friends, and keep agency over when and what to eat. The experience of lockdowns for incarcerated people can look quite different, and has a lot more limitations.

When a Corrections officer at Spring Hill Prison in Waikato tested positive for Covid-19 last month, it was reported to cause widespread fear and uncertainty within the prison. Those who were isolating had limited time out of their cells, had their meal patterns changed and visits from families were suspended. 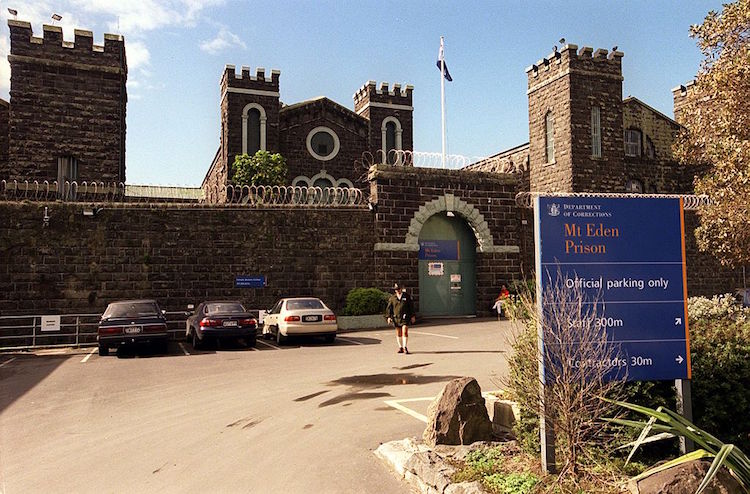 In June 2020, an ombudsman report found that safety precautions to keep Covid-19 out of prisons came at the expense of some basic rights. The report said that at raised alert levels some people in prisons “were not receiving access to at least one hour of fresh air on a daily basis, or in some cases were not being provided with activities to occupy their time.” It was reported in April of last year that some people in prisons were kept inside for 23 hours a day as part of Covid-19 prevention measures, meeting a commonly understood definition of solitary confinement.

Lockdowns and higher alert levels within prisons also means face to face rehab and work-to-release programmes are also stopped. Considering that prisons often house people with addiction and mental health issues, Cormack said there are very real concerns that ongoing restrictions on these basic rights could create further and ongoing harm for people in prisons, and especially tangata whenua.

What needs to change

There has been growing criticism of the government’s Covid-19 response from Māori throughout the pandemic. More recently, those criticisms have been focused toward an exclusion of Māori expertise and what has been described as an inequitable vaccine rollout.

The rollout, which prioritised those over the age of 30 till September 1, effectively excluded more than half the Māori population, who have a median age of around 26. Health providers and health experts have signalled that the lack of targeted vaccination strategy has left our communities even more vulnerable in this outbreak. What’s happening within prisons is essentially a magnification of what’s happening on the outside.

Corrections spokesperson Rachel Leota said there have been challenges to overcoming vaccine hesitancy or people with very fixed anti-vaccine views. “This can be compounded by people receiving misinformation or having authoritarian mistrust,” she said. “For those people who are hesitant, Corrections has used champions within sites including prison directors, senior staff, and other prisoners who have received the vaccination to speak with them and provide reassurance.” Criminologist professor Tracey McIntosh has described how the intergenerational impact of prisons colonises Māori futures. Experts feel the risk of Covid-19 within these spaces only risks entrenching further harm and inequities for future Māori generations.

Both Cormack and King believe quick action needs to be taken to raise vaccination rates of Māori in prisons. “There should be more effort to ensure there is culturally safe, high quality communication with people so that they can make informed decisions,” said Cormack. Māori communities, researchers and health providers have a right to accurate, accessible data to be able to respond to that need, she said.

In other words, no one should have to go through the OIA process to get basic data. “We know that vaccination is really important, but it doesn’t stop the spread of Covid,” Cormack said. Because the vaccine alone won’t stop the spread within prisons, both Cormack and King believe further changes need to be made.

Corrections, they say, must implement further measures, particularly around ventilation, shared cells and sanitation, to reduce the risk of Covid-19 within the space. They’re the same recommendations they made in an article about Indigenous incarceration and Covid-19 that was published last year.

“There needs to be transparency around what they’re actually actively doing to ensure that the impacts of Covid-19 and the inequities are addressed for people who are in prisons,” King said.

They also want to see management of positive cases in prisons that doesn’t rely on solitary confinement, ongoing lockdown practices and suspension of access to visitors or vital programmes, as is the case now.

Cormack and King say there’s a public health argument for decarceration, particularly for those on remand or with low-level offences. This would mean release of imprisoned people into safe accommodation and income support, and a stop on new admissions.

There’s precedent for this. The New South Wales government passed emergency legislation providing release for people from prison due to concerns around the spread of Covid-19. And the UN has released specific guidelines recommending decarceration of those who are at-risk; early release and shortening of sentences; and reducing the use of pre-trial detention.

Whatever your views on incarceration, said Cormack, “prison is the punishment – you don’t then punish people on top of that.”

Subscribe to Rec Room a weekly newsletter delivering The Spinoff’s latest videos, podcasts and other recommendations straight to your inbox.