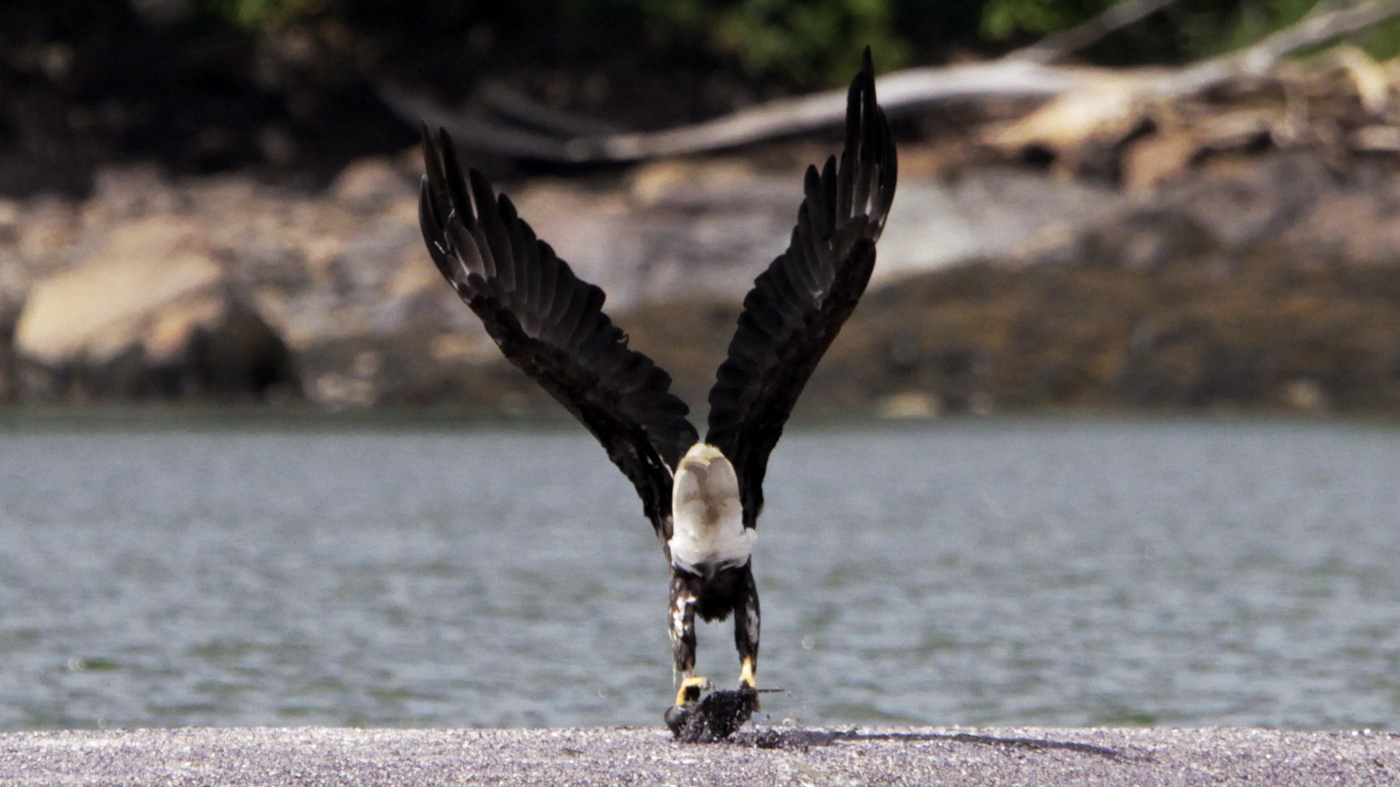 A bald eagle takes flight from a sandbar with its meal in its talons off of Brunswick, Maine, along the New Meadows River, on Aug. 22, 2011.

A bald eagle takes flight from a sandbar with its meal in its talons off of Brunswick, Maine, along the New Meadows River, on Aug. 22, 2011.

The bald eagle population has slowly recovered from the impact of a pesticide that nearly drove them to extinction decades ago. But now researchers at Cornell University have found that lead ammunition continues to hamper the resilience of these American icons.

The use of lead ammunition in bald eagle habitats has reduced population growth by 4% to 6% annually in the Northeast, even as their populations soared in the lower 48 states from 2009 to 2021, according to a study published in the Journal of Wildlife Management.

The eagles feed on the carcasses left behind by hunters, and the dead animals can be contaminated by lead ammunition. The research spans decades of data, between 1990 and 2018, and covers seven states: Connecticut, Massachusetts, Maine, New Hampshire, New Jersey, New York and Vermont.

And while this study focuses on bald eagles, it could have implications for the well-being of other animals that are also known to feed on carcasses, including crows, coyotes and foxes.

“What we’ve got is a lot of data on bald eagles,” said Dr. Krysten Schuler, a wildlife disease ecologist and co-director of the Cornell Wildlife Health Lab. “They’re sort of the poster species that we’re using for this issue because we don’t have the same amount of data to do this type of analysis on other species.”

Bald eagles — hailed an “American success story” by the U.S. Fish and Wildlife Service — were threatened by the use of DDT, a pesticide that nearly obliterated their population. The pesticide was banned in 1972, and the eagles were included on the list of endangered species in the 1973 Endangered Species Act. In 2007, bald eagles were removed from the list.

Lead ammunition didn’t halt the eagles’ recovery, but it didn’t help it either, Schuler explained.

When a hunter shoots a deer with lead ammunition, the bullet disperses into small pieces. If a hunter “field dresses” the carcass by removing its internal organs, the organs left behind carry lead fragments, Schuler told NPR. The eagles unknowingly feed on the lead-contaminated organs.

Lead is toxic to everyone, but the acid in eagles’ stomachs breaks down the lead, eventually pushing it to circulate in their bodies, Schuler said.

“It’s an anthropomorphic source of mortality,” Schuler said. “The eagles are picking up lead from the environment that we put there, and, you know, with hunting ammunition, hunters do have a choice in what they use.”

Utilizing other types of ammunition, such as copper, could help keep lead out of bald eagle habitats. Burying the organs of a carcass shot with lead ammunition could also keep the contaminant from impacting the eagle population, Schuler said.

“This is definitely not an anti-hunting effort,” Schuler said. “We’re really trying to emphasize the choice and the education components.”

Discussion of the use of lead ammunition has also reached Washington.

In July 2020, Rep. Ted Lieu, D-Calif., introduced a bill that would ban lead ammunition on U.S. Fish and Wildlife Services land. The bill died in Congress. At the state level, a member of the Maine Legislature, Rep. Amy Roeder, introduced a similar bill in March 2021. The bill also died.

“Lead is a deadly toxin,” Lieu told Boise State Public Radio in 2020. “We shouldn’t just be spreading it all over the place with ammunition and it’s also deadly to animals.”

With the publication of the study, the researchers publicly shared their software so others can use it to investigate other species.

“When we started out, we didn’t know what we were going to find,” Schuler said. “But it’s been a big question, you know, for as long as I can think of in my career.”