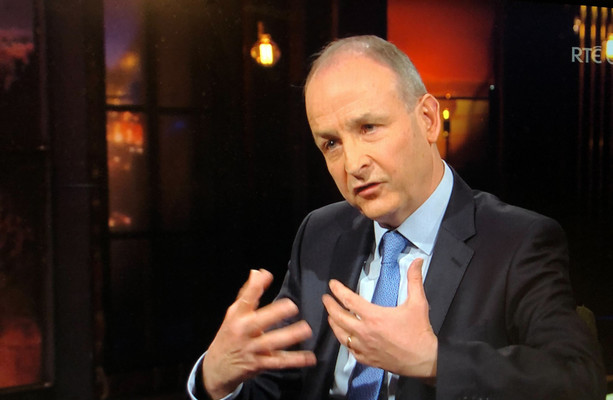 TAOISEACH MICHEÁL MARTIN has said Government will lead on ending bad behaviour and violence towards women.

Martin, speaking on tonight’s Late Late Show, said that the murder of Ashling Murphy in Tullamore had provoked a “powerful act of solidarity” by the Irish people to support the Murphy family.

He said that there must now be an effort to remove a culture of misogynistic violence out of Irish society.

“It is a devastation we all feel in our own homes. That someone so young, so beautiful, so talented with so much to give to our society has been taken away.

“For me I just visualise the classroom for those pupils I have a passion for education.

“See the smiles on the faces of the kids when she walked in to that classroom, the affirmation she would bring to the classroom and all that’s been taken away. And I think people are saying that people are reflecting on all of that and saying enough is enough and this cannot happen and should not happen again,” he said.

“I think men want to step up to the plate here”#LateLate pic.twitter.com/IXqS4leVyK

The Taoiseach said that work was underway on a “major strategy” to deal with violence against women through domestic violence, sexual violence and gender based violence.

“Helen McEntee is overseeing that with Roderic O’Gorman. They have been in touch with all of the stakeholders over the last 12 months and substantive work has been done.

“That’s one level to get a strategic focus as a country, but it has to be a cultural change.

“It has to happen not just at Government level, it is for lead agencies, to people, to families and community, we have to call out the undermining of women and any violence, of course, but beneath the layer of violence, if I may, the whole culture of misogyny, a culture of absence of parity of esteem,” he added.


The Taoiseach said that work is needed in schools but also that there needs to be greater capacity given to teachers.

“And sometimes we don’t do that in a good enough fashion. So listening is the first step.

“But I think men want to step up to the plate and make sure we can create a different kind of society where people do feel safe, and where we can transform the culture that underpins bad behaviour and violence towards women,” he added.