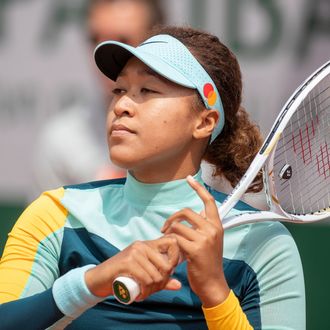 Following her withdrawal from the French Open after a $15,000 fine, and the looming prospect of expulsion, in response to her decision not to talk to press during the tournament, Naomi Osaka’s fellow athletes across the sports world offered their support and, as you can imagine, understanding. Tweeted tennis star Coco Gauff, “Stay strong. I admire your vulnerability.” Posted Steph Curry, “You shouldn’t ever have to make a decision like this – but so damn impressive taking the high road when the powers that be don’t protect their own.”

In a statement, Osaka explained she has been battling depression since 2018, and wanted to skip her post-game press conferences as a way to manage her mental health. “The best thing for the tournament, the other players, and my well-being is that I withdraw so that everyone can get back to focusing on the tennis going on in Paris,” she determined.

On Monday, Martina Navratilova wrote on Twitter, “Good luck Naomi – we are all pulling for you!,” though in a since-deleted tweet, the tennis great also criticized Osaka’s decision: “while she tried to make a situation better for herself and others, she inadvertently made it worse.” Billie Jean King similarly took to social media to discuss professional athletes’ “responsibility to make ourselves available to the media,” but later concluded, “Right now, the important thing is that we give her the space and the time she needs.”

Serena Williams, too, seemed to have mixed feelings about the pressures of interviews, and media scrutiny in general, saying, “it made me stronger,” but expressing support for Osaka’s decision to “handle it the way she wants” to preserve her mental health. “I’ve been where I’ve been very difficult to walk in in those moments. But you know, it made me stronger,” the tennis star said, when asked about press conferences during a post-match interview at the French Open, according to AP.

“Not everyone is the same. I’m thick. Other people are thin. Everyone is different and everyone handles things differently. You just have to let her handle it the way she wants to and the best way she thinks she can. That’s the only thing I can say: I think she is doing the best she can.” Said Williams, “I feel like I wish I could give her a hug, because I know what it’s like. Like I said, I’ve been in those positions.”

You shouldnt ever have to make a decison like this-but so damn impressive taking the high road when the powers that be dont protect their own. major respect @naomiosaka https://t.co/OcRd95MqCn

I am so sad about Naomi Osaka.I truly hope she will be ok. As athletes we are taught to take care of our body, and perhaps the mental & emotional aspect gets short shrift. This is about more than doing or not doing a press conference. Good luck Naomi- we are all pulling for you!

It’s incredibly brave that Naomi Osaka has revealed her truth about her struggle with depression.

Right now, the important thing is that we give her the space and time she needs.

We wish her well.

Even though it shouldn’t have to be like this, I’m proud of you for putting your foot down. Your mental health matters and should always come first. https://t.co/SKJlfTJuGm

It’s so sad that we are in a time that when a young person tells you they need help or a break, people respond with anger and a lack of support! I stand with you @naomiosaka Your mental health is just as important as your physical health ❤️🙏🏾