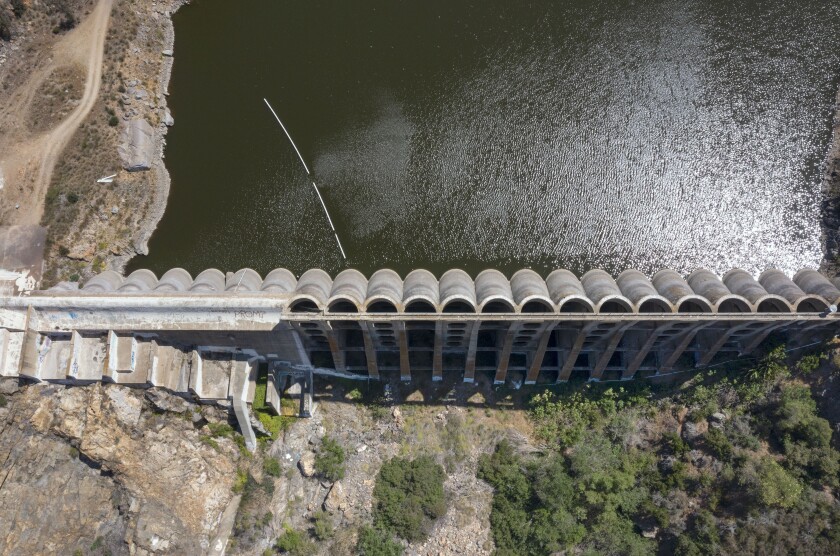 San Diego is launching a $10 million effort to complete risk assessments of all nine of the city’s aging dams — only three of which are considered in satisfactory condition.

City officials say the assessments are expected to reveal problems that will require an estimated $1 billion in repairs and upgrades in coming decades — and possibly some replacement dams in extreme cases.

San Diego’s dams are among the oldest in the state and the nation. State officials said three dams are in “poor” condition — Hodges, El Capitan and Lower Otay — and three have been rated “fair”: Morena, Barrett and Lake Murray.

The city dam in arguably the worst condition — Lake Hodges Dam in Rancho Bernardo — already is slated for replacement with a new $150 million compacted concrete dam 100 feet downstream from the existing dam, built in 1919.

None of the city’s dams have received the state’s lowest rating of “unsatisfactory,” and city officials say there is no imminent risk of a dam failure that could flood a local community and threaten lives.

The only three dams to get the state’s highest rating of “satisfactory” are San Vicente, Miramar and Sutherland.

City officials say proactively evaluating the dams, which range in age from 61 years to 109 years, is important to avoid long-term failures and to strengthen the dams so their reservoirs can hold the maximum amount of water.

The city’s nine reservoirs provide roughly 10 percent of the city’s water supply, and the rainwater they collect is much cheaper than the imported water the city relies on for most of its supply.

But because many of the dams have structural problems, city officials have been forced to push out rainwater in “controlled releases” after rainstorms to reduce reservoirs to safe levels.

City officials said last week they also are considering low-interest loans from the state and possible federal help to pay for assessing and repairing the dams as needed.

Councilmember Sean Elo-Rivera said it’s frustrating that dams typically must fall into significant disrepair to get outside funding.

“A dam gets into a pretty bad spot before it’s eligible for this sort of funding,” Elo-Rivera said after hearing a detailed presentation on city dam safety May 19.

The outside funding would help cover an estimated $10 million city officials say they need to spend on new comprehensive analyses of all nine dams.

A similar analysis launched in 2016 got sidetracked by the near failure in 2017 of Sacramento’s Oroville Dam, which prompted city officials to narrow a $5 million effort to dams with similar spillways to Oroville: Hodges, El Capitan, Morena and Lower Otay.

The consultant hired for that analysis only completed a full assessment of Hodges, leaving the other eight dams in need of a thorough analysis, city officials said.

The Hodges analysis concluded that a replacement dam is needed. Initial plans call for a $150 million dam to be built 100 feet downstream. Officials say it may take as long as a decade to complete this project; they have not yet broken ground.

Analyses of the other eight dams will help the city determine needed repairs and upgrades for each dam, how to prioritize them, and which capital improvement projects to include in city budgets going forward.

While safety is the No. 1 factor in prioritization, a dam’s role in local water supply and reliability also will be considered, city officials said.

In addition, some of the dams and reservoirs provide water to agencies other than the city, affecting how they get prioritized. For example, Hodges supplies water to the San Dieguito Water District, Santa Fe Irrigation District and the County Water Authority.

Vien Hong, a city civil engineer, said city officials plan to use the new assessments to lay out a decades-long plan that features short-term and long-term priorities and includes a list of specific projects.