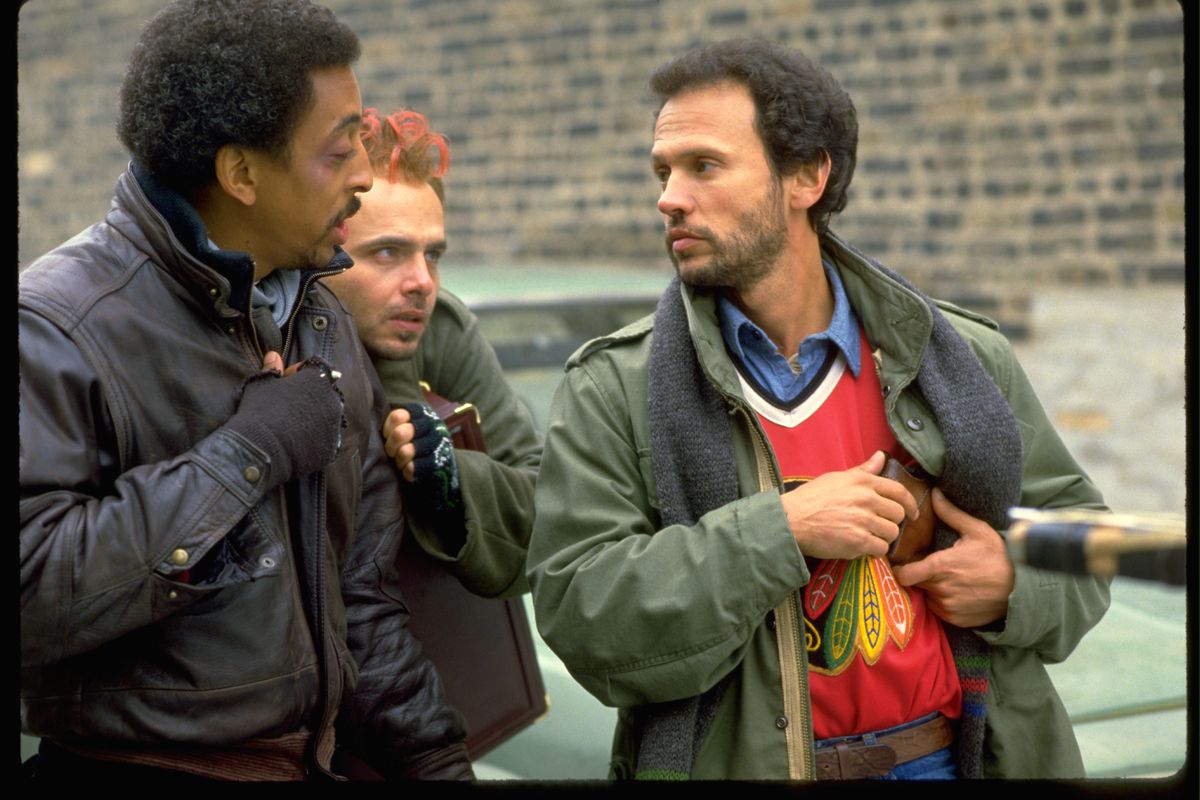 Back in the mid-1980s, comedian Billy Crystal and actor-dancer Gregory Hines might not have been the first two names you’d think of to play streetwise plainclothes Chicago police detectives, but Crystal and Hines had terrific rhythm as Danny Costanzo and Ray Hughes, respectively, constantly exchanging snappy banter even as they exchanged gunfire numerous times with aspiring criminal kingpin Julio Gonzales (Jimmy Smits, usually sporting a stylish scarf) and his seemingly endless supply of Uzi-wielding henchmen.

“I loved that movie,” Billy Crystal told me in a recent remote video chat. “Someone else brought it up to me the other day. … He said, ‘That was my movie of the ’80s.’ I had the best time in Chicago, and that was really my first movie role that was a starring part right after ‘Saturday Night Live.’ ”

The original script for “Running Scared” was about two older New York City cops on the verge of retirement who get caught up in the proverbial One Last Job before taking off the badges. It was refashioned as a Chicago buddy cop movie where the two leads are 16-year veterans but still in their 30s — young men facing burnout and actually turning in their 30-day notices as they plan to leave the Chicago winters behind and run a bar in Key West. But then, of course, they get caught up in that One Last Job.

“Originally it was going to be Gene Hackman and I think Paul Newman, playing the two retiring cops,” said Crystal. “Then the script was just sort of sitting around and [director] Peter Hyams said, ‘I wanna go with these two guys, I think they’d be great together.’ ”

Watching a Chicago-set film from 1986 in 2021 is like watching a Chicago-set film from 1951 in 1986 (math!), so yes, there are times when “Running Scared” seems dated. (Although I still love Michael McDonald’s “Sweet Freedom,” the signature hit from the movie.) People roller skating through the streets of Chicago (and Key West)! Cassette tapes! A break-dancing extra in a Cubs scarf adding local flavor! An opening credits sequence featuring two different glimpses of the old Sun-Times Building at 401 N. Wabash! A car phone the size of a construction brick!

“Ah, the mobile phone,” said Crystal. “They have a program at USC, I think it’s called ‘Movies We Love,’ and this young professor called me up, and Peter and I went to a screening of ‘Running Scared.’ When that phone comes up, everyone just laughs. It’s like in those World War II movies when [Crystal picks up an oversized water bottle]. ‘Hello Charlie Company, Charlie Company, we need some air cover!’ That’s how big that phone was.”

Rewatching “Running Scared,” I got a kick out of all the local sports visual cues, from Ray wearing a Walter Payton jersey and later a 1983 White Sox cap to Danny sporting a Blackhawks sweater and then a Cubs jersey under his winter coats. When Joe Pantoliano’s Snake, an informant with a shock of magenta-colored hair, eyes Danny’s baseball cap in the precinct station, Danny barks: “Don’t even think of putting my Cubs hat on that hair!”

“Running Scared” was partially filmed on sound stages in Hollywood and on location in Key West, but much of the lensing took place in Chicago, as evidenced by an abundance of outdoor locales, from Graceland Cemetery on the North Side to spots in the Loop to the Columbia Yacht Club to Uptown and Lake View. The practical effects and stunt driving are impressive throughout, with a highlight being a car chase that begins at O’Hare and winds up with Ray and Danny, and the vehicle they’re pursuing, literally driving on the L tracks before coming to a screeching, crashing halt at the LaSalle/Van Buren station.

Then there’s the grand finale, which takes place inside the gleaming new structure then known as the State of Illinois Center, with Ray crashing through the glass on a window washer’s rig, and henchmen disguised as Illinois State Troopers blasting away at the good guys. It’s not as chaotic as the Bluesmobile racing through Daley Plaza while pursued by dozens of state and city cops in 1980, but it’s pretty spectacular. Stunt personnel are flying everywhere in the climactic shootout.

“It was just so much fun making that movie, I miss Gregory Hines terribly,” Crystal said of his co-star, who died in 2003.

“Occasionally I’ll put it on and watch just as a way of visiting with Greg.”

“Running Scared” is available for purchase or rental on streaming services and on DVD and Blu-ray from Kino Lorber.

The top entertainment stories, features and must-read reviews, sent to you weekly.