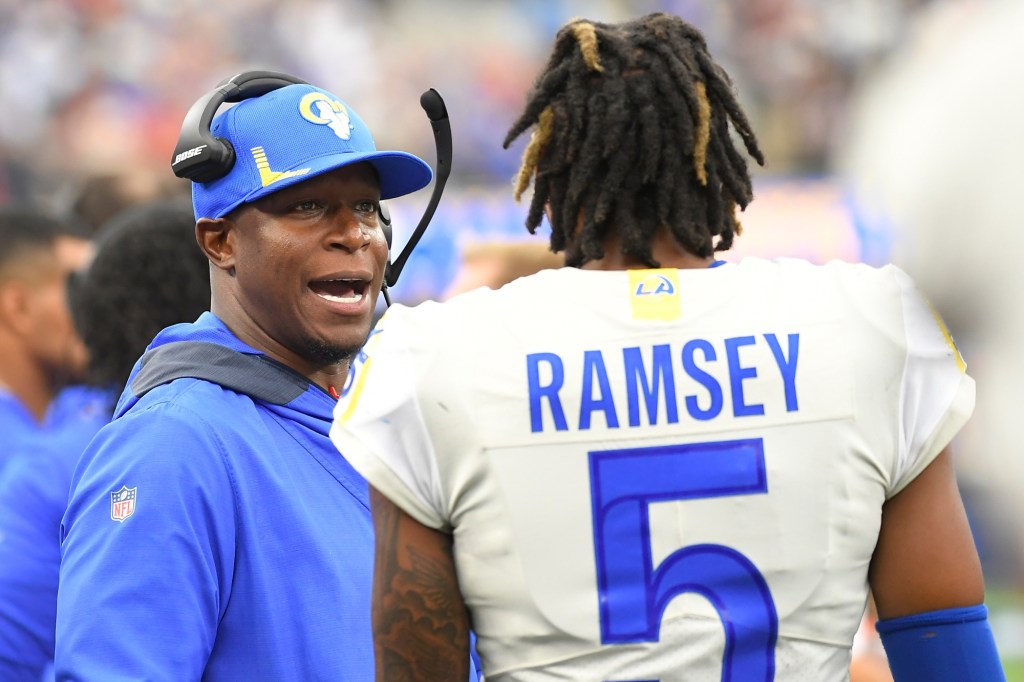 THOUSAND OAKS — It’s another week and another change in the Rams’ defensive secondary.

“You hear the cliché about coaches saying ‘next man up.’ This is more like next men up,” defensive coordinator Raheem Morris said Thursday as the Rams (4-1) prepared to play the New York Giants (1-4) in East Rutherford, N.J., on Sunday.

Williams hurt an ankle late in the Rams’ 26-17 victory over the Seattle Seahawks last week and went on injured reserve, knocking last season’s team interceptions leader out of action for at least three weeks.

Williams’ value has been compounded by his ability to play outside or inside cornerback, which helped to free two-time All-Pro corner Jalen Ramsey to play a uniquely versatile role.

“You’ve got to have versatility with Jalen,” Morris said. “Darious was a big part of us having the ability to do those things.”

Morris indicated replacing Williams will take some combination of Rochell, the rookie who had an up-and-down night in Seattle in his first NFL start; Long, who got back on the field only after Williams was hurt; and defensive back Terrell Burgess, a 2020 third-round draft pick who has been limited to special teams.

Presumably, the Rams will call up a defensive back from the practice squad, likely Dont’e Deayon.

This isn’t necessarily an easy week to be missing Williams, who had a game-clinching interception in the Rams’ 17-9 victory over the Giants last year at SoFi Stadium.

Although the Giants are last in their division and missing running back Saquon Barkley (ankle) and wide receiver Kenny Golladay (knee), they have moved the ball through the air. Quarterback Daniel Jones (concussion) was back at practice Thursday. Rookie wide receiver Kadarius Toney caught 10 passes for 189 yards in a loss to the Dallas Cowboys last Sunday.

Morris sees Williams’ injury as an opportunity for Burgess to make his mark and Long to bounce back from his benching.

“There’s been no secret. We’ve got championship aspirations,” Morris said. “These guys have got to play that way.”

Williams and Ramsey are both allowing 5.5 yards per pass thrown to receivers they’re covering, much better than the league average of 7.6. As a team, the Rams are allowing 7.5 yards per pass, 16th in the 32-team NFL, after giving up 6.2 last season, best in the league.

Ramsey said losing his cornerback partner is damaging but he’s confident in the replacement(s).

“It’s going to be a group effort, for sure,” Ramsey said. “We’ll see on Sunday how it shakes out.”

Morris, who was an assistant on Gruden’s Bucs staff between 2002 and 2008 and succeeded Gruden as head coach in 2009, praised the NFL for efforts on inclusion.

“But this message (conveyed by the emails) and these things that have come up show that there’s way more work to be done when you talk about inclusion, when you talk about people being sensitive to other people’s feelings and all those sorts of things,” Morris said, saying he meant “in our country, not just in NFL football.”

Speaking about Gruden, who resigned as Las Vegas Raiders coach on Monday, Morris said people who know him have “got to find a way to bring him back.”

“For us, it would have to be him searching out some of the people that he has to talk to, to search for that type of forgiveness,” Morris said.

Defensive tackle Aaron Donald returned to practice as a “limited” participant Thursday, according to the Rams’ injury report, after banging knees with another player in the Seahawks game. … Kicker Matt Gay (ankle) and running back Jake Funk (hamstring) were limited in practice again. … Ramsey planned to go to the Kings’ season opener with Rams teammates Thursday night at Staples Center after attending both of the Dodgers’ home playoff games against the San Francisco Giants. With fans allowed back, Ramsey said, “I’m like, ‘Let’s live a little bit.’”