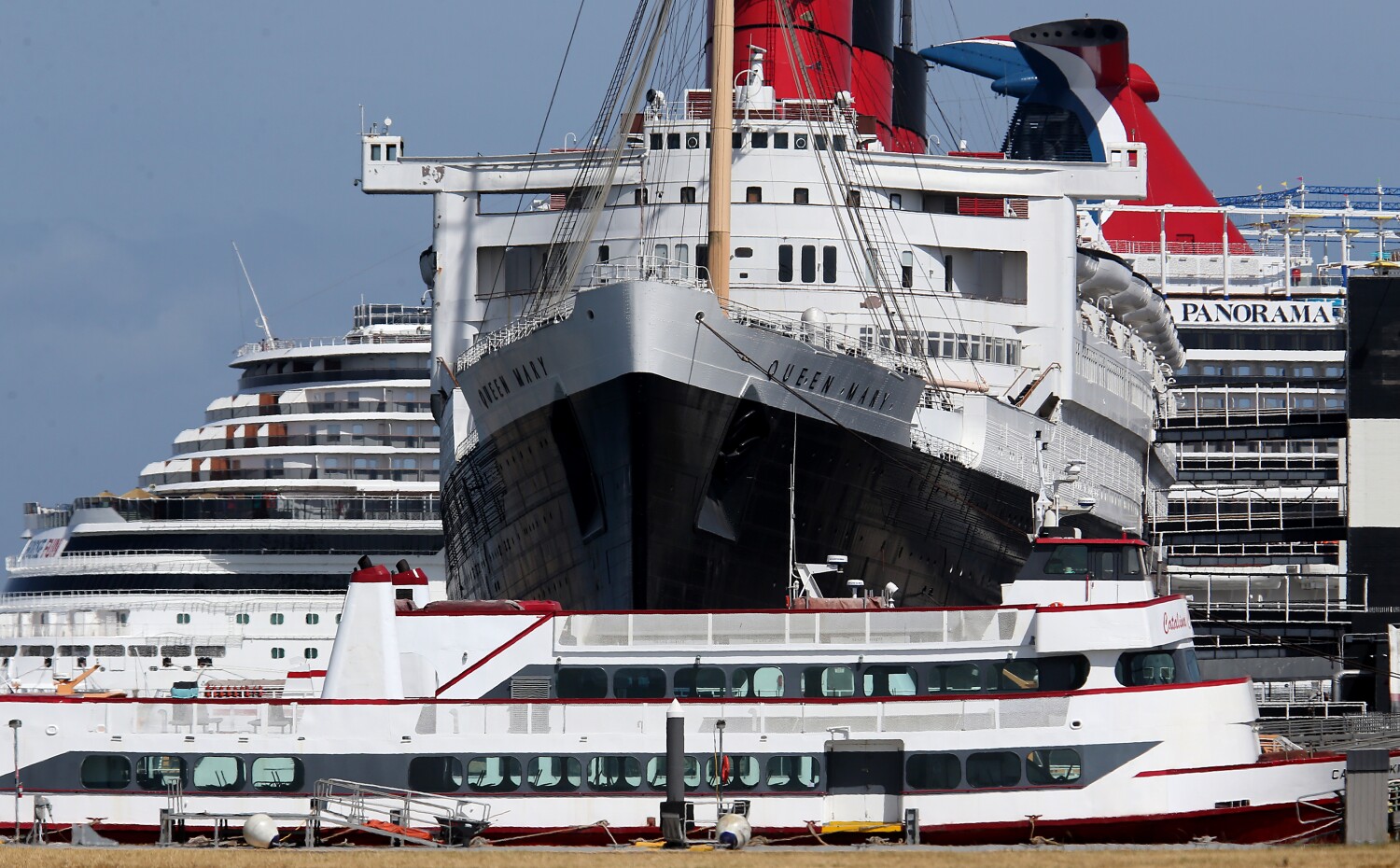 In the 85 years since its maiden voyage, the RMS Queen Mary has survived rogue waves, transatlantic crossings and even a world war.

For the last five decades, it’s enjoyed a second life docked in Long Beach, riding waves of popularity and tough times as a tourist attraction.

But the historic ship is now facing its most challenging voyage yet.

After years of neglect by a string of operators, the Queen Mary is so creaky and leaky that it needs $23 million in immediate repairs, according to a trove of court documents and inspection reports released last month. There is growing concern that if something is not done soon, the ship could fall into critical disrepair and be in danger of sinking.

The Queen Mary has long struggled as a tourist attraction, in part because of the inherent costs that come with maintaining such a large vessel. Its struggles led to a variety of failed proposals that would have sent it to Canada, New Zealand and even back to England.

In 1992, the city fought a plan to move it to Hong Kong. In 1997, a promoter proposed sailing it to Japan for a few years as a way of raising money for repairs. The city rejected that idea too. At one point, Disney eyed the Queen Mary as the center of an oceanside theme park, but that plan fell through too.

“The city’s been trying to get the Queen Mary right for 40-plus years,” Long Beach Mayor Robert Garcia said during a news briefing last month. “It’s been from one leaseholder to the next. … It has not succeeded to the point where there has been the right partner and the right preservation plan in place.”

The Queen Mary’s current state of disrepair is extensive: Structural steel is corroded, the bilge system is aging, the hull is compromised and leaks and safety hazards abound, according to an April 28 inspection by city-hired marine engineering firm Elliott Bay Design Group, as first reported in the Long Beach Post.

Docked in Long Beach since 1967, the ship is a longtime tourist attraction, hotel and history buff destination that retains strong support from city leaders, including Garcia, who recently said it was important to preserve the ship’s presence in the port city.

But nobody seems willing or able to pay for it. The city of Long Beach owns the Queen Mary, but officials said it’s not their responsibility to make repairs on the ship that for decades has been leased out to operators. The current operator is locked in bankruptcy proceedings.

Meanwhile, the ship could flood or even capsize within the next two years, according to the recent reports.

“Urgent category work items … should be addressed immediately for safety from flooding in the next two years,” court documents said, noting that the current status of various systems “could lead to flooding throughout the ship, potential capsizing of the ship and life safety and environment issues.”

In the news briefing, Garcia said the ship is “an important part of not just Long Beach history, but of the history of the country and its relationship with the U.K.”

Many companies with ambitious plans have tried to keep the Queen Mary financially afloat. Over the years, operators have hosted music, food and holiday festivals, including New Year’s Eve and Halloween celebrations and Friday the 13th-themed “haunted room” offerings that take advantage of the floating hotel’s historical, first-class interiors.

Queen’s Seaport Development Inc. operated the vessel from 1993 to 2005 before filing for Chapter 11 bankruptcy protection. Save the Queen LLC faced similar financial woes in 2009.

When L.A.-based real estate investment firm Urban Commons arrived in 2016, it came with a promise and a plan. The company signed a 66-year lease and within three years formed Eagle Hospitality Trust for the purpose of raising funds for a $250-million commercial development around the ship called Queen Mary Island.

But in January, the trust and its affiliated entities filed for Chapter 11 bankruptcy protection with more than $500 million in liabilities, along with a motion to sell their assets, including their leasehold interest in the Queen Mary.

City officials said Urban Commons is still on the hook for failed lease obligations, and have moved to block the sale of the lease to a new bidder until the issues can be remedied.

The city’s formal objection was filed May 14, and court documents outlined additional urgent safety concerns on the vessel, including that the ship’s lifeboats and lifeboat support systems show significant signs of rotting and deterioration and need to be removed and replaced.

The April inspection also found that critical items outlined in a 2015 survey were “largely un-started at this time.”

Howard Wu, a principal at Urban Commons, said in a statement that revenue all but dried up during the COVID-19 pandemic, “which has made preservation resources difficult for a time.”

“However, we will continue to do whatever we can to help recover and to preserve a vibrant future which we believe to be in the near horizon,” Wu said.

Some who know the Queen Mary best were not surprised by the eye-popping amount needed to preserve the vessel, and said the city bears some blame for its own inaction.

“The city was never able to keep up with the maintenance on that ship, regardless of who they leased it to,” said Ed Pribonic, who spent nearly three decades as the Queen Mary’s monthly inspector. He listed asbestos and electrical wiring issues as some of his top concerns about the ship’s safety and stability.

Pribonic said the city often tried to downplay his critical reports, which chronicled the ship’s degradation for years. His contract was terminated in 2019.

Although he has a fondness for the Queen Mary and would like to see it stabilized, Pribonic worried that “the amount of money and the amount of time it would take — I can’t see who’s going to step up and take on that responsibility. We’re talking hundreds of millions of dollars and years of work.”

Beyond the immediate crucial repairs, the city has also raised questions about Urban Commons’ use of COVID-19 relief loans, as well as its use of $23 million in bond proceeds and tidelands trust funds issued in 2017 to address some of the ship’s critical repairs, many of which have not been completed, according to court documents.

That number is on top of the urgent $23-million items outlined during the April inspection.

Wu said that the company worked with the city to create a budget and that repairs “were decided and planned together.”

“The Queen will always have a list of repairs that are to be prioritized together between the lessee and the city — as was done with the advancement of the $23 million for urgent repairs three years ago,” he said. “Those monies were directed to the highest-priority repairs at that time, jointly with the city, and each project and expense was decided openly and transparently.”

In a statement last month, Long Beach officials reaffirmed the city’s objection to the sale of the lease and argued that the city should not be required to spend its own funds to repair the ship because its issues had been well-documented.

The city will “continue to work with the bankruptcy court to achieve an outcome which will best position the ship for long-term success,” Long Beach director of economic development John Keisler said in a May 20 memo.

During the recent news conference, Garcia said the Queen Mary should “absolutely be preserved.”

Once the largest ship the world had ever seen, the Queen Mary transported royalty, celebrities and politicians during its heyday in the 1930s. After the start of World War II, it was painted gray and converted into a troopship that ferried Allied soldiers, earning the nickname the “Grey Ghost” for its speed and camouflaged color.

It was eventually retrofitted to its former luxurious glory before its final journey to Long Beach, and it has continued to draw visitors ever since.

Wu noted that a pre-pandemic economic impact report found that $115.2 million in spending from visitors, tourists and event vendors associated with the Queen Mary in Los Angeles County generated $205.3 million in economic output and $6.1 million in tax revenue in 2019 and supported more than 2,200 jobs, among other items.

“While profit margins for the Queen Mary operation have always been thin, and during the major repair and renovation periods operational income was negative … our commitment to her legacy and preservation has never faltered,” he said.

Despite myriad issues, some said it is worth the hurdles to preserve the legendary ship, which is one of the National Trust for Historic Preservation’s “Historic Hotels of America.”

“The Queen Mary is worth saving for many reasons, including its historic significance as one of the fastest and grandest ships of its time, its important role in WWII carrying troops, its unique sense of place [and] one of the finest examples of Art Deco decor,” said Lawrence Horwitz, executive vice president of Historic Hotels of America.

Horwitz also noted that the ship plays a valuable role in tourism, and that millions of visitors have come to see the Queen Mary during its decades in Long Beach.

The city’s objection to the sale of the lease is expected to go before a judge this month, and an auction will probably be delayed until later this summer, officials said.

Long Beach has also been considering shifting control of the Queen Mary to its Harbor Commission, which oversees the Port of Long Beach, and is conducting a study to determine the feasibility of that plan.

The Queen Mary has been closed since May 7, 2020, because of the COVID-19 pandemic. It does not have an established reopening date at this time, city officials said.