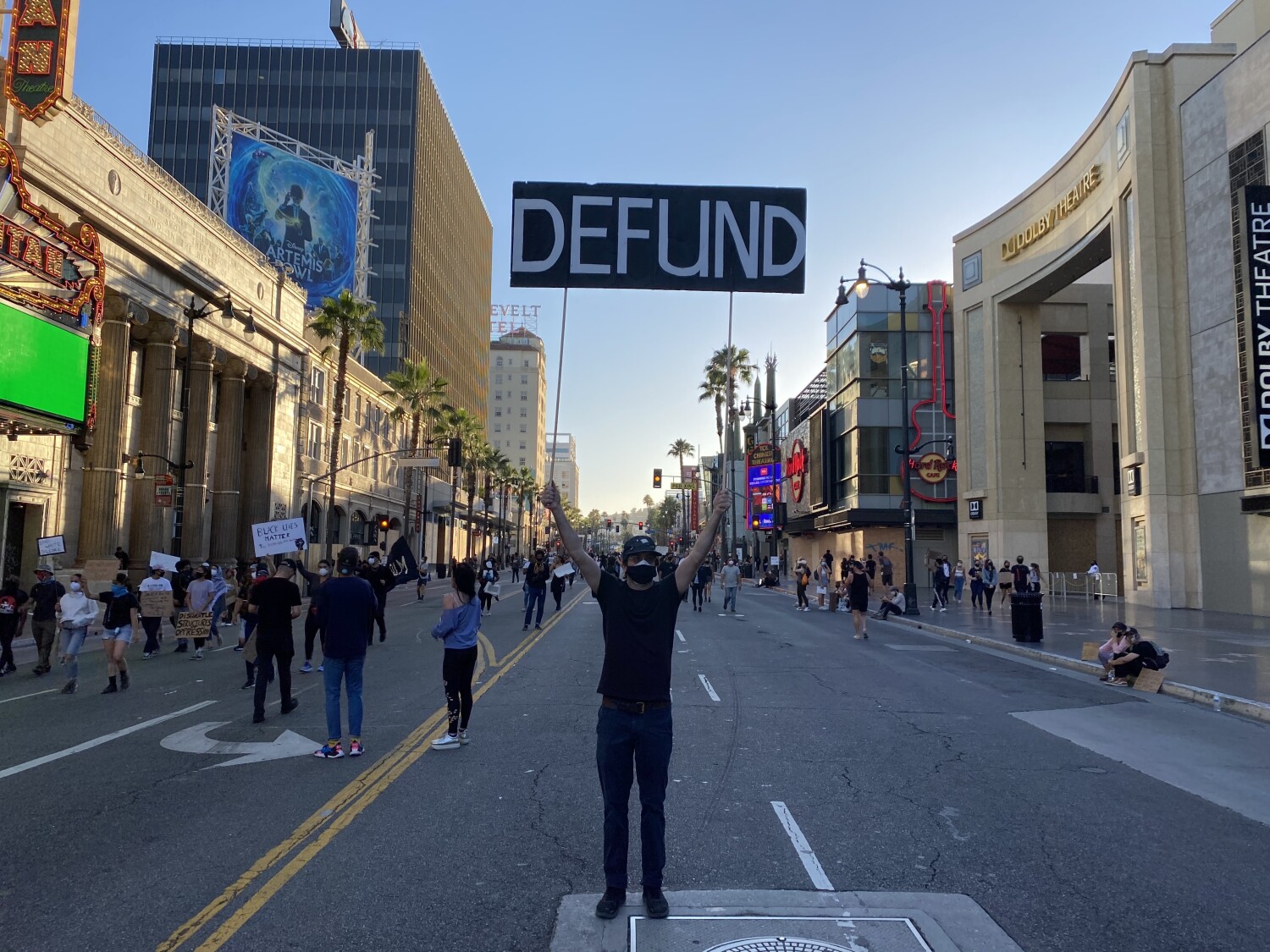 A year after protesters massed in the streets of Los Angeles chanting “Defund the police!” and “Abolish the LAPD!” the Los Angeles Police Department is a changed organization but hardly in the ways its critics wanted.

Its operating budget was cut by $150 million last May with much fanfare, to $1.71 billion, then more quietly increased this year by about 3% — to $1.76 billion, a huge chunk of the city’s overall spending.

Still, the protests — and the year of economic upheaval they occurred in — have forced major changes within the department, its daily operations and the way city officials see its role in public safety.

In the last 12 months, the department has shrunk by nearly 500 officers. Specialized units have been cut in favor of patrol and newer, community-oriented teams.

Key policies, including one governing the use of force, have been rewritten to hold officers to stricter standards. Three reviews of the unrest were conducted and dozens of recommendations for how to better handle future demonstrations remain under review.

In a nod to protesters’ demand that police take a step back, officers have stopped responding to minor traffic collisions, and police officials are looking for ways to hand off calls involving addiction, homelessness and mental illness.

Officers also are arresting fewer people, even in the face of rising violence. Violent crime is up 5.8% over last year — largely due to increases in homicides and shootings — while violent crime arrests are down 5%. Other crime, including most property crime, is down, as are robberies and rapes. Arrests overall are down nearly 10%.

A year after the George Floyd protests, the LAPD is in the midst of transition, with few fully satisfied with the current state of affairs.

Police boosters suggest the city would be better served if all the scrutiny placed on cops in the past year was redirected toward criminals. They say police funding should be increased given the surges in gunfire and killings, not reduced.

“The biggest takeaway for me is all the social media slogans — ‘Defund the police’ — have been an absolute disaster,” said Craig Lally, president of the union that represents rank-and-file LAPD officers and a member of the department for 40 years. “If you defund the police, you have to replace it with something, but nobody had a plan to replace it. That really baffled me, that anyone could buy into that stuff.”

Critics of the LAPD say changes implemented in the last year mark some progress but fall far short of their demands for a more wholesale overhaul of public safety — which they say will require reductions to the police budget.

“That’s the perfect point to make about why we need to defund the police,” said Melina Abdullah, co-founder of Black Lives Matter-Los Angeles. “We can’t fund those resources as long as they are gobbling up so much of the city budget.”

One of the biggest changes of the last year was the slow shrinking of the LAPD force.

On May 19, 2020 — six days before Minneapolis Police Officer Derek Chauvin made the fatal decision to kneel on Floyd’s neck — LAPD Chief Michel Moore told L.A.’s civilian Police Commission that the department had 9,985 sworn police officers, already down from its budgeted number of more than 10,000, and 3,046 civilian employees.

In the ensuing months, however, the city’s budget concerns from the coronavirus intensified, a hiring freeze was implemented, attrition increased and ranks dwindled.

By last week, Moore told the commission that the LAPD had 9,503 sworn officers and 2,760 civilian employees. And city officials have said they expect the sworn figure to continue to decline, to 9,457 by next month.

Moore said the reductions have made it more difficult to address violent crime, which sharply rose after the pandemic set in. As of this month, homicides were up 26.5% over 2020 and nearly 45% over 2019.

“An added police presence, when properly positioned in our communities, can deter further acts of violence,” Moore said. “Those resources are impacted when we have the reduction in staffing levels that we have seen.”

Officials said the city’s new budget provides for about 9,700 officers, and Moore said he hoped to restart hiring and put more officers in neighborhoods hardest hit by the violence soon, but that plan could be hampered if attrition continues at its current pace.

The shrinking force led to other changes, including a dramatic restructuring of the department, in which Moore asked unit commanders to submit proposals for what their teams should look like with fewer resources.

In November, the entire department was told that specialized units would be downsized or dismantled entirely to stave off cuts to patrol and the Community Safety Partnership Bureau.

Specialized teams focused on sexual assault, burglary and animal cruelty were cut, with their responsibilities taken up by officers in local stations. Special details in Hollywood and along the beachfront were reduced, as were robbery and homicide, commercial crimes and traffic units. Also reduced was the LAPD’s once-vaunted and recently embattled Metropolitan Division, which includes SWAT and other tactical units.

A few months later, Moore announced another major change: LAPD officers would no longer be responding to minor traffic incidents.

Moore said the change does not prevent officers from responding to more serious collisions or criminal incidents such as drunk driving. Deputy Chief Blake Chow, commander of the LAPD’s Transit Services Bureau, estimated the change would save about 160,000 hours of police work.

At the start of this year, the LAPD began a pilot program to divert calls involving people experiencing suicidal thoughts or threatening to die by suicide to mental health responders. Under the yearlong, $379,000 pilot with Didi Hirsch Psychiatric Services, mental health professionals are available eight hours a day to handle calls and connect people with appropriate services other than law enforcement.

The LAPD also has dual-response teams that pair officers with experienced clinicians in situations involving people in mental health crises, people experiencing homelessness and individuals suffering domestic violence and abuse. However, those teams are able to respond to only a portion of the calls that come in, according to a report provided to the Police Commission late last year.

It’s unclear when more extensive programs might be put in place to take a greater volume of calls away from police, something police officials have lamented.

“What we need moving forward is for that to be amplified and built to scale in a city of 4 million, and to do so in a manner that relieves the [LAPD] of those calls but also protects the public,” Moore said in March.

At the urging of Gov. Gavin Newsom, the department banned so-called carotid holds, in which officers put pressure on the sides of a person’s neck to restrict blood flow — which can render a person unconscious.

The Police Commission introduced a revised use-of-force policy that required officers to only use force that is in proportion to the crime committed or the threat posed by a suspect; to immediately render aid to those they injure when possible; to report excessive force by other officers if they witness it; and to intervene and stop their fellow officers when such force is being used in their presence.

The department also discontinued its use of CalGang, a statewide database of thousands of people who law enforcement have alleged are tied to gangs. Reviews of the system have found it riddled with errors, and activists have alleged the data are inherently flawed and racist — with the entries from the LAPD among the most questionable.

The policy change came just weeks before three LAPD officers were criminally charged in July with falsifying gang information about people on field interview cards that was then submitted into the database. Three more were charged in October.

On the protest front, the LAPD has implemented some reforms in the last year and is considering many more.

Three reviews of its handling of the spring protests and unrest found extensive tactical failures, including at the highest levels of the LAPD, and determined that officers poorly trained on projectile weapons had nonetheless been armed with them and sent into the field. Many protesters were injured, as were police officers.

The LAPD says it has retrained thousands of officers on crowd control, instituted new rules around projectile weapons and implemented new protocols to ensure better communication during major events. The department also was placed under a federal court injunction restricting its use of projectile weapons as part of one of several lawsuits over its handling of the protests.

Still, dozens of recommendations for change outlined in the three reviews have yet to be implemented.

What effect the changes to the LAPD have had in the city is unclear.

Like arrests, police stops are also down. In the first three months of 2021, police stopped about 125,000 people, a more than 27% reduction from the nearly 171,000 people they stopped during the same period last year. Police also saw an 8.3% reduction in calls for service during that time frame.

The LAPD returned in recent months to making traffic stops in South L.A., a practice that had gotten them into trouble in the past due to racial disparities among those they stopped, with people of color being stopped far more often. Such stops remain well below what they were before last year, when the practice was largely halted, but police said they are better at targeting criminals — and taking more guns off the streets as a result.

In the first three months of this year, police said they took in 2,339 firearms, a 66.5% increase over last year.

Abdullah, of Black Lives Matter-Los Angeles, said looking back on the last year, many of the changes introduced by the LAPD and its overseers were the result of public demand — of protests in the street.

“None of these things, none of the minor changes or the significant changes, came because police decided to reform themselves, or came because elected officials chose to move in that way on their own,” she said. “They all came from pressure by the people.”

She said her organization and many others have seen their power and won’t stop working until the programs that communities need and deserve are funded with police dollars.

“We’re on our way to transforming the way public safety works in this country and in Los Angeles,” she said. “It was a momentous year, but we are going to continue to struggle.”

Cynthia Anderson-Barker, an attorney who is helping to represent Black Lives Matter-Los Angeles and other protest groups in their lawsuit over the department’s handling of the protests, said she sees the many changes of the last year as “tinkering” by the department when it should be focused on the root of the problem: a warrior mentality among too many cops, especially when they are deployed in communities of color and at protests.

“There are so many ways to tinker here, but I think the problems are bigger and very much structural, related to class, culture and race,” she said. “The police have no incentives at the bottom to change.”

Lally, the union president, disagreed. He said the LAPD is already one of the most reformed and professional agencies in the nation and deserves more credit for that. He also said that asking whether officers who confront murderers, track down gangs and protect residents and businesses against violent demonstrations have a “warrior mindset” was nonsense.

“You can give it any title you want, but at the end of the day we’re put in those positions to try to protect people,” he said. “When the city is burning or getting looted, who are they calling? Us. And we’re just trying to do the best we can.”