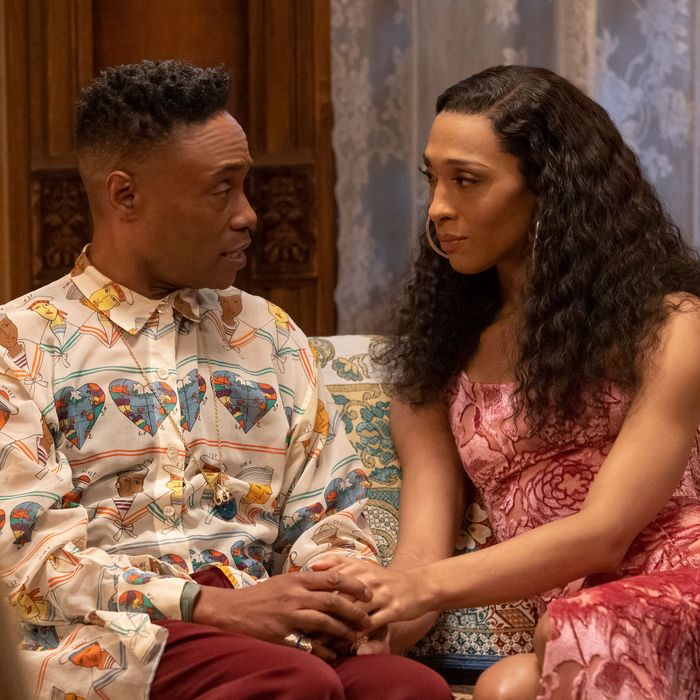 It’s fitting the title for “Something Old, Something New” echoes the title of Pose’s previous episode. These last two outings before the show’s grand finale feel like a matching pair. But where “Something Borrowed, Something Blue” all but rushed through its many plotlines, this week’s installment is a welcome unhurried affair. Writer-director Janet Mock lets us truly rejoice in every moment leading up to Angel and Papi’s wedding, which is lavish and opulent, yes (thank you Mother Elektra), but at heart it’s a beautiful send-off for two characters who have become the very family they had long craved for themselves.

Pose, as I’ve noted before, is very much a show about motherhood. With characters like Blanca and Elektra (Mj Rodriguez and Dominique Jackson), Steven Canals, Mock, and the rest of the creative team have constantly centered Black trans women in a story about what it means to nurture and to mother. And so, it was lovely to find the show, which is maybe setting up a way to say good-bye to its resident father figure (Billy Porter’s Pray Tell), diving headfirst into what fatherhood might mean to people like Angel (Indya Moore) and Lil Papi (Angel Bismarck Curiel).

For Angel, a father hasn’t just been an absent figure. He’s been an ever-present one that’s remained just off frame — by choice. As we learn, Angel’s been sending her father Carlos (David Zayas) money for years even as he’s yet to live up to the father his daughter so wishes for herself. The centerpiece of this episode may be that Boys II Men wedding serenade (more on that in a bit), but Angel’s conversation with her father felt to me as just as transfixing a moment. It wasn’t showy. It wasn’t melodramatic. And it wasn’t, as so many storylines in this show are, neatly resolved by episode’s end.

Instead, it felt like a raw moment captured with infinite grace, serving as both a character vignette and a necessary plot engine: how apt that it’s through seeing how her father has failed her that Angel realizes why she needs to show up for Papi and Beto. But even without that moment of self-realization, their scene at the diner would’ve resonated: Like many heady talks with family members, theirs was a conversation full of missed moments of connection.

Sentiments like, “No one would look at you and know you’re a boy” and “That shit ain’t normal” aren’t so much heartbreaking as they are, especially in Moore’s performance, expected responses that can only be met with dumb indifference. The hurt lies less in the words here being said than in the failed attempts at recognizing how hurtful they are. “You’re still the same person I ran away from,” is a line that reads less like a condemnation than an abdication.

For Papi (“Or should I call you Daddy?” as Ricky jokes), being a dad is showing up for his son, Beto. It’s not losing his patience when his energetic little boy chaotically tries to help out in the kitchen. It’s being the loving father figure he wanted for himself. As he confesses to the men in his life ahead of his wedding, he grew up in a machista culture that had very limited notions of what a man — and, in turn, a father — could be.

“I never had men stand by me,” Papi says, and you can hear the heartbreak of admitting as much. But, like everyone else in the show, Papi recognizes how his newfound family has helped him reframe what it means to be a man. “Y’all are real men,” he tells those around him. If Carlos is an illustration of what distorted visions of gender norms can do to strong family bonds, Papi is here to remind us that being a loving father and being a strong man need not be mutually exclusive categories. There’s softness in his strength and there is strength in his softness.

It’s what made his “I Swear” moment all the more heartwarming. Yes, it’s the kind of gesture that belongs more in a romcom, but that’s precisely the genre this pair of episodes is harnessing. And so, if Elektra got to have her “Big mistake!” Pretty Woman moment last episode, it makes sense that we’d get a 10 Things I Hate About You-esque moment where there’s no better way to express how much Papi loves his new bride than to suavely croon a Boys II Men number. And, just like we’ve seen with similar numbers (mostly courtesy of Mj Rodriguez and Billy Porter), there’s a beauty in co-opting these generic narrative beats and having them deployed to celebrate a ceremony and a couple as special as Angel and Papi.

And yes, there is plenty to celebrate here: The image of all these brides cheering on Angel (and themselves) speaks volumes on its own. As does that final image of this newly created family hanging out at the beach. Does this mean we won’t see them in next week’s finale episode? Are we going to see everyone else get their very own version of a happily ever after? I, for one, can’t wait to find out.

Pray may not be the focus of this episode, but even that small glimpse of what may become his quilt was heartbreaking. Related: If you want to learn more about the AIDS quilt, check out the NAMES Project AIDS Memorial Quilt website. In a fairer world, we would all be able to stream the Academy Award–winning documentary Common Threads: Stories From the Quilt, but the Rob Epstein and Jeffrey Friedman–directed documentary is not streaming or available to purchase anywhere. You can’t even buy a decent DVD of it! Can any one of the millions of streaming services out there rectify this for us soon?

We get our second Candy (Angelica Ross) appearance this season and boy is it one for the books. Amid a scene that already felt tinged with magic — with Lulu, Blanca, and Elektra looking the part of angelic fairy godmothers bestowing gifts on a beatific and beautiful bride — the sudden appearance of Candy was a joy. That she also got to speak out against survivor’s guilt (“that’s gonna do nothing but waste time,” she says) was a fitting way to give her yet another send-off.

I’m not one to warm up to cute TV kids (I know, I know, I’m a monster), but Beto cheekily closing his eyes when he sees Papi and Angel kissing was just next-level adorable.

Papi working that Dominican charm at the city clerk’s office is proof that Angel Bismark Curiel’s charisma could move mountains.

• “Budget is not in that bitch’s vocabulary!” — truer words have not been said about Elektra.

• We did get to meet Jerome from the strip club!

• Vanessa Williams’s “Save the Best for Last” (heard here in a string arrangement during the wedding) deserves this kind of love, always.

Keep up with all the drama of your favorite shows!