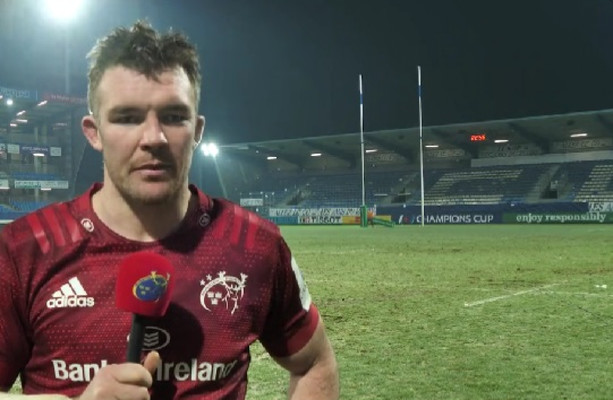 MUNSTER BOOKED THEIR place in the knockout stages of the European Champions Cup by way of a last-gasp Gavin Coombes try in Castres on Friday night but captain Peter O’Mahony admitted that his side’s French visit had been tinged with sadness following the tragic death of Ashling Murphy in Tullamore.

Ms Murphy, a 23-year-old primary school teacher, was attacked and killed while out for a jog in Cappincur, to the east of the Co Offaly town, at around 4pm on Wednesday.

While a garda investigation into her murder continues, dozens of vigils took place around the country on Friday in Ashling’s memory.

The crowd sings A Woman’s Heart as the vigil in Dublin draws to a close. #VigilforAshling pic.twitter.com/Lsz2006H24

Speaking in the immediate aftermath of Munster’s victory at Stade Pierre-Fabre, O’Mahony spoke on behalf of the southern province in paying his respects to the Murphy family and Ashling’s loved ones.

The Ireland international admitted that the impact of Ashling’s death had been felt by Munster’s travelling party to the south of France.

We weren’t able to be a part of all the tributes and vigils for Ashling Murphy at home, the shocking act that happened. She was part of our community in Limerick having gone to Mary I.

Munster captain Peter O’Mahony has offered his condolences on behalf of the squad and everyone at Munster Rugby to the family & friends of Mary Immaculate College graduate Ashling Murphy following her tragic death on Wednesday.

A 40-year-old man was arrested a short time after Ms Murphy’s body was discovered on Wednesday but, after questioning by gardaí, he was released without charge. Gardaí have been keen to reiterate that he is no longer a suspect.

However, they say they are making “significant progress” in their investigation.