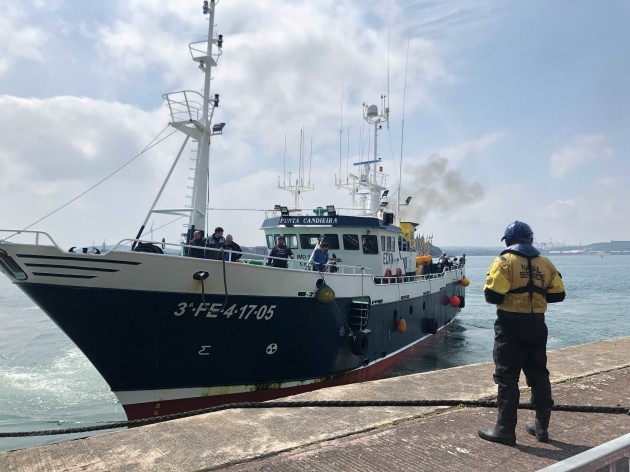 THE IRISH NAVY has detained a Spanish fishing vessel off the coast of Cork over alleged breaches of fishing regulations.

A Defence Forces spokesperson said the Spanish vessel was arrested just under 100 miles off the Cork coast.

That vessel was detained by the LE Róisín on Monday and has since berthed in Cobh in County Cork, where it was met by fisheries officers and gardaí.

“The detention was in relation to alleged breaches of fishing regulations. The vessel will be escorted to port, where on arrival it will be handed over to An Garda Síochána.

“This is the fifth vessel detained by the Naval Service in 2021. The Defence Forces conducts at sea fishery inspections in line with the service level agreement with the Sea Fishery Protection Authority, as part of its delivery of government services to the state,” the spokesperson said.

In the wake of the incident, Independent TD Michael Collins, from west Cork, called on the Government to provide greater protections for Irish fishing crews.

Deputy Collins said that a Spanish trawler Punta Candieira was involved in the alleged incident near Bantry Bay.

“Irish fishing men and women fishing inside the 12-mile limit for local fishing, derive the protection of the national flag,” Deputy Collins said.

Deputy Collins said he was a witness to the alleged incident in west Cork. Collins said that the allegations raise “serious questions”.

Irish Naval Service member on the quay in Cobh as the Punta Candieira arrives.

The Journal was on the quayside in Cobh at lunchtime today as the vessel arrived, accompanied by the crew of the Irish navy vessel.

The crew, from Galicia in Spain, were fishing using the long line method for hake off the Irish coast.

A navy team  from the LE Róisín, wearing helmets and yellow dry suits, accompanied the vessel in a rigid inflatable craft to the deep water quay.


The crew, many of whom are Indonesian, were on board the vessel but would not be drawn on the events of the coast.

Gardaí were awaiting an interpreter before boarding the vessel. 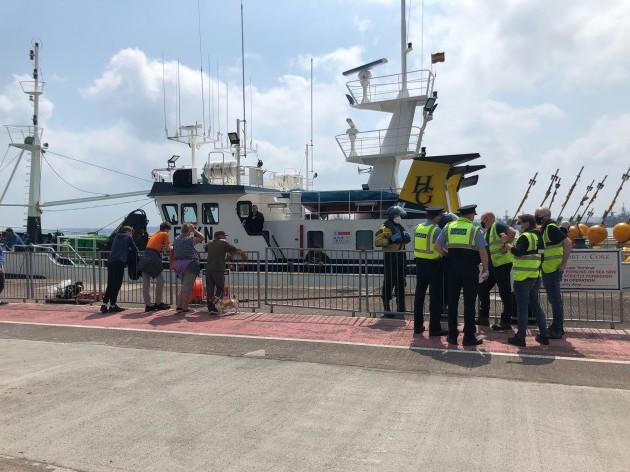 Gardaí along with naval personnel and other officials on the quayside.

A spokesperson for the Department of the Agriculture, Food and the Marine refused to comment on Deputy Collins’ statement.

“The monitoring and control of fishing vessels within Ireland’s Exclusive Fisheries Zone are matters for the Irish control authorities,” they said.

“Under the Sea Fisheries and Maritime Jurisdiction Act, 2006, all operational issues of this nature concerning sea fisheries control are, as a matter of law, exclusively for the Sea Fisheries Protection Authority and the Naval Service.

“The Minister is precluded from getting involved in operational matters including in relation to law enforcement,” the spokesperson said.