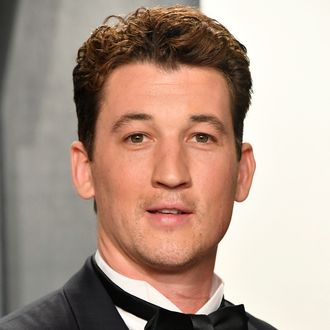 Miles Teller and his wife, Keleigh Sperry Teller, are clarifying the circumstances that led to Teller getting punched in the face at a restaurant in Hawaii this week. Some quick context: Teller and his wife are vacationing in Hawaii alongside his Divergent costar Shailene Woodley and her boyfriend, Aaron Rodgers. TMZ reported on Friday that Teller had been assaulted on Wednesday at a restaurant in Maui, and that the assailant “was a wedding planner who claimed Miles owed him $60,000 for services he performed for Miles’ wedding in Maui back in 2019.” Sperry Teller, however, released a statement on her Instagram Story disputing TMZ’s report that the altercation occurred over an unpaid bill. “The story reported about Miles being punched in the face by @TMZ over ‘money’ is completely false,” Sperry Teller wrote. “Miles was jumped by 2 men we have never met after they trapped him in a bathroom. It seems these same men have done this to many people and we appreciate your support Maui. This is now a criminal investigation.” Woodley then reposted Sperry Teller’s message to her Instagram Story.

I got jumped by two guys in a bathroom. Never met them before in my life but ya cool wrestling segue bud

Teller himself also addressed the situation on Twitter. In response to a tweet from Pat McAfee mocking the incident and comparing it to WWE, Teller wrote, “I got jumped by two guys in a bathroom. Never met them before in my life but ya cool wrestling segue bud.” McAfee apologized in a later tweeet. Per People, a spokesperson from the Maui Police Department confirmed that the incident is currently under investigation.