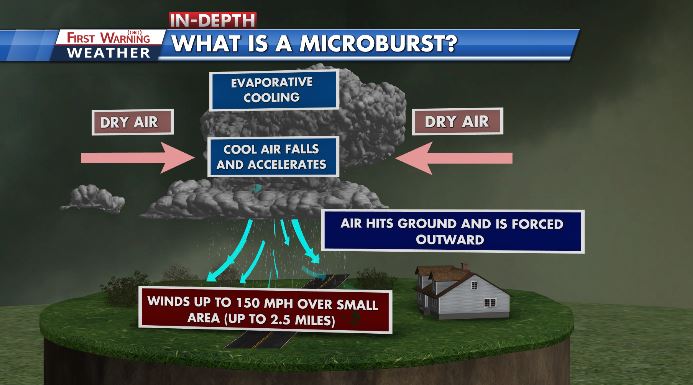 AUSTIN (KXAN) — The National Weather Service has completed a preliminary survey of the damage from Friday night’s storms in Bastrop County. Their findings suggest that straight-line winds were to blame for the damage that happened between 7:30 p.m. and 8 p.m. that evening.

They focused much of their survey around concentrated wind damage near Red Rock, Rockne and Rosanky in Southern Bastrop County near Highway 20. It was in this particular area where there had been reports of a possible tornado.

Upon surveying the damage in the area, the National Weather Service office covering Austin/San Antonio found that it was the widespread straight-line winds of a microburst — bringing gusts around 80 miles per hour — that caused the damage.

According to the survey, they found “several buildings with roof damage including the Red Rock General Store, and other barns/outbuildings with metal roofs along and near Highway 20 between Rockne and Red Rock. Numerous trees were heavily damaged, including large limbs down as well as some trunks snapped. This tree damage was fairly extensive in Red Rock, Rockne, along Highway 20, County Road 535, County Road 234 and most other roads in this vicinity…extending east to near Rosanky.”

While focusing the cause of the damage on a microburst, the National Weather Service said it’s impossible to rule out that a small tornado may have caused some damage within the area where straight-line winds brought more significant damage.

The National Weather Service labels this survey as “preliminary” in case more evidence comes forward to change the category or intensity of the wind damage.

In Depth: What is a microburst?

A microburst is a localized column of sinking air (downdraft) within a thunderstorm and is usually less than or equal to 2.5 miles in diameter. Microbursts can cause extensive damage at the surface, and in some instances, can be life-threatening. There are two primary types of microbursts:

Wet microbursts are accompanied by significant precipitation and this was likely the type of microburst that developed Friday evening.