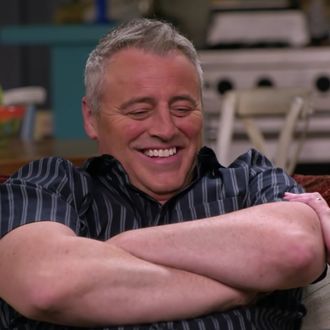 While most of the time an entire nation taking to social media and collectively weighing in on your general vibe sounds terrifying, this weekend Matt LeBlanc got to experience the best possible version of it, when Irish Twitter users came together to discuss who Matt LeBlanc reminded them of in last week’s Friends reunion on HBOMax: their uncles. “The rest of the world should know that for the last 24 hours Irish Twitter has become OBSESSSED with how much Matt Le Blanc looks like everyone’s uncle/cousin,” Irish comedian and actor Dara Ó Briain tweeted on Saturday, along with an impressive rundown of the new meme that asks, in the words of user @peterjmcgann: “How *you* getting on?”

And in case you aren’t familiar enough with Irish uncles to understand the meme, don’t worry: they are extremely similar to all uncles, or at least, to the platonic ideal of an uncle: bemused, slightly behind the times, and, above all else, not against having a pint. The Friends actor has yet to publicly address his new-found status as official Irish uncle, but we really hope someone has told him about it. If so, we’re pretty sure we know the exact expression on his face when he heard.

“How *you* gettin on?” pic.twitter.com/eUtpLAurl8

Can’t get enough of these “Matt LeBlanc looks like an Irish da” memes and I think I found a winner pic.twitter.com/5ZusUmTkEY

matt leblanc is your uncle when your parents forced your 6 year old self to stand up in front of the adults after a family dinner and sing a song you just learned in primary school pic.twitter.com/xjlwKDdArv

Matt LeBlanc is your uncle at a wedding buying you too many beers and getting your name mixed up with your siblings while rolling his eyes lovingly at your aunt drunkenly flailing to Dancing Queen pic.twitter.com/RjxxIIX5RI

Matt LeBlanc looks like the Dad on Christmas that is happy to see you open your gifts even though he doesn’t know what any of them are cos your Mum got them all pic.twitter.com/h0lM3CEqPi

Cmere to me what is it you’re studying now? Oh law right right very good ah jesus sure i’ll know who to ring so the next time i get myself into a bit of trouble!! pic.twitter.com/i0Nb8R6mzg

‘And you paid for them jeans like that ya did, with all them holes already in them?’ pic.twitter.com/mpKFmuevfM

matt le blanc looks like a fella you’d end up having a deep conversation with in the residents bar after a wedding. ten pints deep and he’s giving you the best advice you’ll ever get. you’ll never meet him again but his sage wisdom sticks with you forever. a gentleman pic.twitter.com/KfXpHjFdsA

Ah nooo Bridie Ah gwan yeah
sure I’m only I’ll have just the
popping in for one cup now
a minute for c’mere did ya
a catch up no hear what
hassle like happened to- pic.twitter.com/z6xlrRK77J

You’re joking! Sure I was only talking to him on Wednesday pic.twitter.com/9Fb9uEqUZq

You might throw on another pint there Tommy when you’re ready pic.twitter.com/NtvG26oSsW