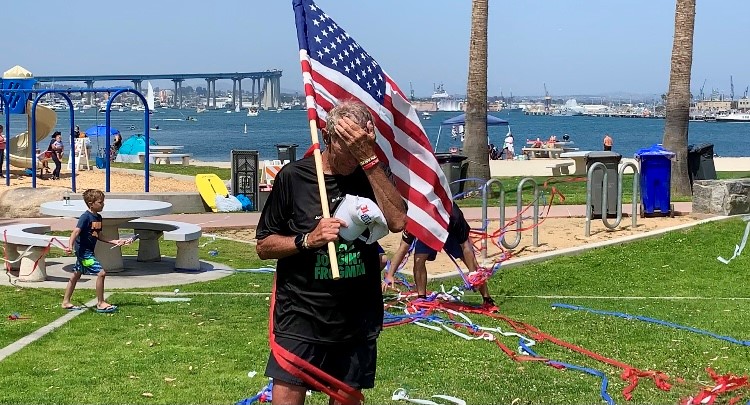 A long-time San Diego man has honored the lives of 31 fallen American heroes with a most unique Memorial Day feat.

Mike Rouse, 68, ran 31 miles every day of May to honor 31 military members killed in a helicopter crash in Afghanistan in August 2011.

“I heard one of the dad’s say just a couple of days ago that this is Memorial Day for most people. Once a year, we honor, we pay respects. He said, ‘I have Memorial Day every single day of my life, and I never will stop because I lost my most precious gift, my only son,'” Rouse recalled.

Rouse, who now lives in Abilene, Texas, finished his exhausting and rewarding journey just after 2:30 p.m. on Memorial Day outside of the Naval Amphibious Base in Coronado.

He was cheered on by a group of onlookers holding small American flags, and showered with red, white, and blue streamers.

Rouse ran his final mile holding a U.S. flag, and as he finished, took off his hat, dropped his head in his hand and reflected on the lives lost.

“It’s all about giving back, that’s what makes your life better. It’s not what you get, it’s what you give,” Rouse said.

For each day of his runs, which averaged between five and six hours a day, Rouse wore a shirt with a different name of the 31 servicemembers killed in the crash.

Of the 30 humans killed, 22 were Navy SEALS. A service dog named Bart was also killed.

Among those SEALS, was a man Rouse considered one of his best friends, John “JT” Tumilson. The pair met through a running group.

Rouse has an inspiring story himself. He began running in 1986 while in prison for a drug offense. But he said it gave purpose, even though he could barely run two miles in the prison courtyard.

“It was during that time that I realized, that’s not how I want to live my life. And so, I made a change, and said I’m going to give back something and I’m going to change who I am,” Rouse explained.

Rouse teamed up with a charity organization called the Boot Campaign to raise money and awareness for military veterans and their families.

“When I think of their loss and that pain, for me to hurt just a little bit, for four or five or six hours a day, is nothing. Its my opportunity to give back just a small portion of what was given to all of us,” he said.