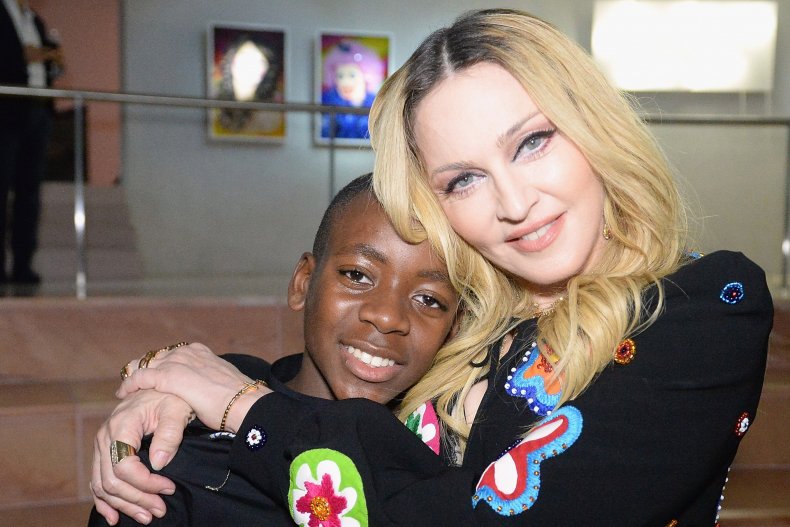 Decades after earning a name for herself for breaking barriers, Madonna appears to be passing the baton to her children.

The pop icon, 62, took to Instagram over the weekend to proudly share footage of her son David Banda, 15, modeling a white silk Mae Couture dress.

With 1990s Snap! classic “The Power” serving as the soundtrack, the teen was seen confidently strutting through the halls of the family’s palatial home in the gown.

Accessorizing with a pair of rectangular sunglasses, David was also shown posing for snapshots before palm trees as he showcased his ensemble in all of its glory.

His ankle-length dress of choice was decorated with a series of hand-painted black letters and was teamed with a pair of pristine white basketball shoes.

As his journey through the family mansion reached its conclusion in the kitchen, David scooped up some white grapes from the counter as he expressed his joy.

Bouncing up and down as he stretched his legs, David said: “I low-key like wearing… like, it’s so freeing, you know what I mean?”

Captioning the clip, Madonna was the ultimate proud mother, as she wrote: “Confidence is Everything………. #davidbanda @mae_couture #snap.”

The video attracted a flood of supportive comments, including one from Madonna’s close friend Debi Mazar, who compared him to supermodel Naomi Campbell.

Actress Mazar, who has appeared in a number of Madonna’s music videos over the years, wrote: “Omg I Love him… Look out @naomi.”

Mother-of-six Madonna adopted David from his native Malawi in 2006 when he was 13 months old. At the time, she was married to British filmmaker Guy Ritchie.

The star has previously spoken about the traits she believes David has inherited from her, admitting he’s the one she had the most in common with of all her children.

“What he has more than anything is focus and determination,” she told British Vogue in a 2019 interview. “I’m pretty sure he got it from me.”

She went on: “He’s the one I have the most in common with. I feel like he gets me; he has more of my DNA than any of my children so far. Let’s see what happens—it’s still early days for everyone.”

Madonna’s brood includes daughter Lourdes Leon, 24, from her relationship with Carlos Leon, and son Rocco Ritchie, from her marriage to Guy Ritchie.

Like David, her other children were adopted from the south-east African nation of Malawi—daughter Mercy James, 15, and twins Stella and Estere, eight.