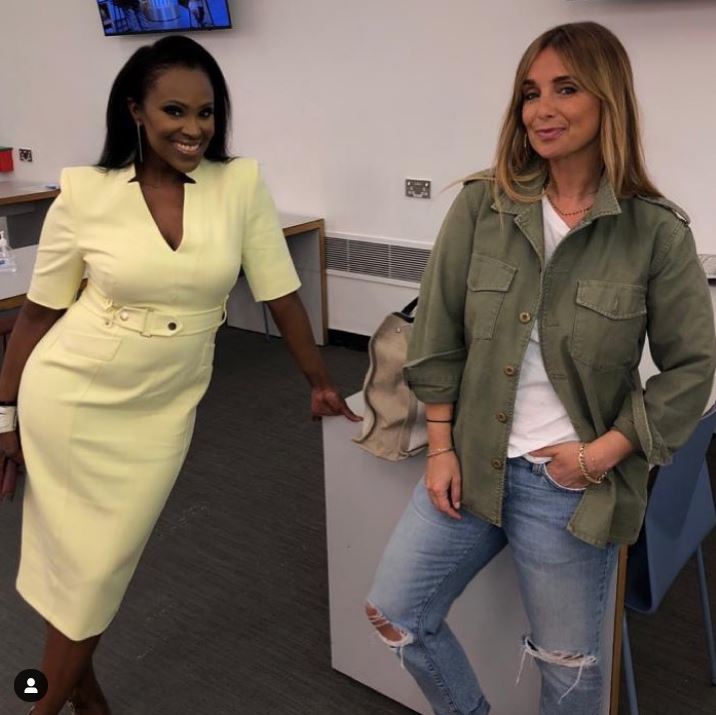 The Masked Dancer star bumped into Loose Women panellist Kéllé, 46, in the ITV studios as she appeared on This Morning.

The 46-year-old marked the moment by sharing a socially-distanced photo of the pair looking glam together behind-the-scenes.

Louise’s photo was inundated with comments from fans begging for the nineties girlband to reunite.

One person wrote: “Ok now youve innocently bumped into eachother but now in my head its the beginning of an #Eternal reunion” (sic).

“Looking good ladies x hoping we get an eternal reunion, even a one off gig pretty please,” another wrote.

Eternal’s debut album, Always and Forever became the first album by a female group to achieve over a million sales in the UK.

The R&B group consisted of Easther Bennett and her older sister Vernie Bennett, with Kéllé and Louise.

The band were formed in 1992 by music manager Denis Ingoldsby of First Avenue Records when Easther and Vernie were scouted in a London nightclub, and they went on to recruit Louise.

The trio began working together and recording until Louise introduced her longtime friend Kéllé to the management and joined the group.

Louise left the group in 1995 to pursue a solo career. At the time Louise told a press conference that she left because she was “miserable and homesick.”

After Louise left the group, Esther, Vernie and Kéllé continued as a trio – who released their album Power of a Woman that entered the UK chart at number six.

Covid delayed tests 6 times… then I was told I had cancer, says Demi Jones

In 1997, Eternal achieved their first ever UK number one, a duet with BeBe Winans, I Wanna Be the Only One which became the second most played song on UK Radio in 1997, and stayed at the top spot for one week.

Louise’s beaming photo comes after she left son Beau in shock when she revealed herself as the Flamingo on The Masked Dancer.

The 12-year-old turned around in surprise to the singer after it was revealed she was the second celebrity to be ‘unmasked’ on the show.