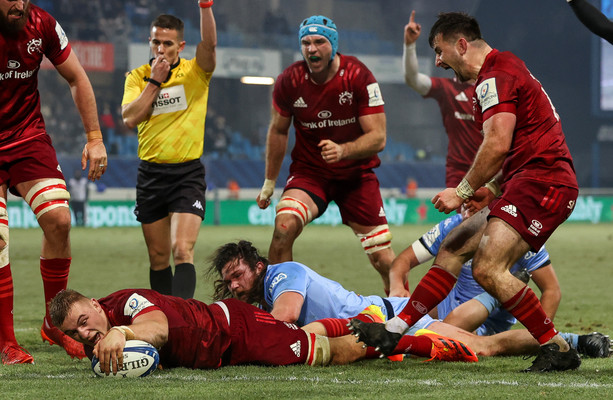 HIS JOB THIS season has been to replace the previously talismanic and relentless CJ Stander and when Munster needed it most, Gavin Coombes stretched out his left arm to dot down a crucial try.

It came with 78:00 on the clock and Munster having seemingly already blown their big game-winning chance only eight minutes before when Castres picked off a five-metre lineout to cling onto their lead.

Munster snuck a win in Castres.

But Munster surged forward one more time, won a penalty, went into the corner, made progress at the maul, and earned penalty advantage before Coombes scooped up the ball and took responsibility by battering his way forward to finish.

It means Munster are three wins from three in Europe. A win at home to Wasps next weekend will leave them as one of the top-ranked sides for the knock-out stages, crucial for possible home quarter-finals and semi-finals.

It was last-gasp stuff tonight and Castres will be sickened.

They had made 14 changes to their starting XV following three consecutive wins in the Top 14 and Munster were firm favourites to dispatch the French club’s second-string side but the visitors didn’t get it all their own way.

The home team were impressive – defensively aggressive, tactically astute, robust in contact, while they also produced a nice try with a clever kick from out-half Ben Botica allowing fullback Thomas Larregain to score.

Munster, on the other hand, had their most experienced available team out but struggled to put the Top 14 outside away. Their error rate inside the Castres 22 was very high as they failed to score on repeated visits, offloading loosely on too many occasions.

Their attack flowed briefly in the early stages of the second half but they lacked cutting edge at other times as their handling and passing let them down, and had to rely on their undoubted defensive turnover strengths at the maul and lineout as key weapons.

The result was the most important thing here in front of a vocal crowd in Castres, though, and while it wasn’t their most convincing performance, Munster showed some grit to manufacture that late chance for Coombes. 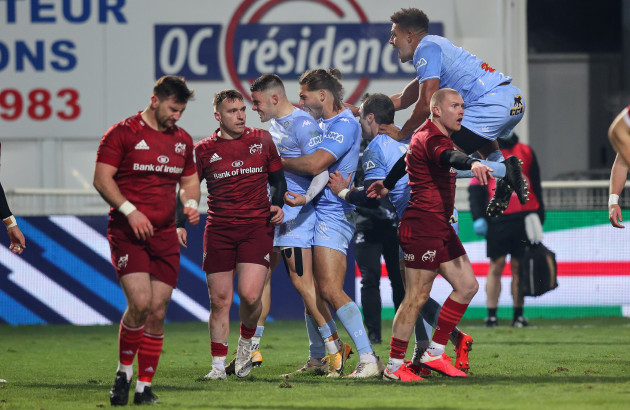 Munster’s onslaught against the Castres lineout and maul started early on as captain O’Mahony rose to pilfer the French team’s throw. The visitors were soon off the mark on the scoreboard as Castres went off their feet competing at the breakdown and Crowley fired over the penalty from 42 metres out.

A maul turnover came shortly after as O’Mahony and Stephen Archer combined to stop the French side, but Munster’s issues down in the Castres 22 quickly became apparent.

First time around, a loose Mike Haley offload allowed Castres to force a turnover before the clearly injured Niall Scannell couldn’t hit his mark at a lineout down the right. The Munster hooker was replaced minutes later due to that arm/shoulder issue.

A needless Haley tackle in the air on Santiago Arata Perrone gave Castres access into Munster territory and forced the scrum-half off injured, but O’Mahony and Tadhg Beirne teamed up for the maul turnover this time.

Munster broke from deep off the ensuing scrum on their own 22-metre line as Rory Scannell stroked a left-footed kick wide to Keith Earls, who surged forward and linked outside to Haley, who passed back inside to Chris Farrell near the Castres 22. He was hauled down and when Munster recycled, Crowley’s cross-kick out to Conway wide on the right was behind the wing and forced him to check his run forward.

Castres did give up a penalty in their scramble back but when Munster kicked into the right corner, the Top 14 outfit came up with a huge lineout steal five metres out from their own tryline. 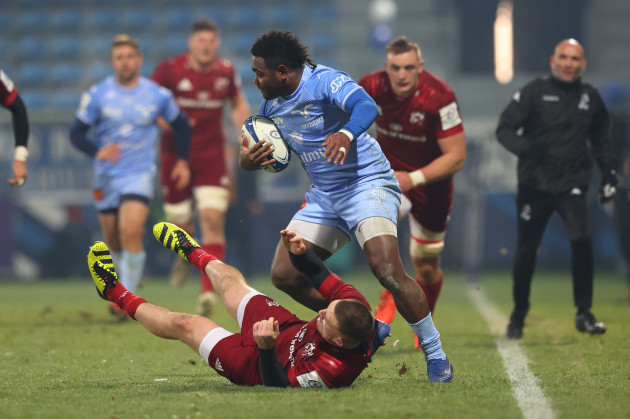 When Castres kicked clear, Dave Kilcoyne knocked-on near the halfway line, Castres then won a scrum penalty and headed down into the Munster 22 to score. It came from a tap penalty five metres out, with out-half Ben Botica following up some direct carrying from his forwards by dinking a clever kick in behind the onrushing Munster defence for fullback Thomas Larregain to gather and score.

Botica converted for 7-3 with 30 minutes on the clock and then Castres turned up the defensive heat on Munster, forcing a knock-on and another miss for the Irish province in the home side’s 22.

Left wing Filipo Nakosi then produced a massive carry down the touchline as he brushed past Murray and sat Conway down with a huge bump-off, only for Munster to fight their way back and force a turnover penalty to lift the pressure.

Van Graan’s men had one more attack in the Castres 22 before the break when O’Mahony stole another lineout but this time, Gavin Coombes threw the loose offload and Botica was able to force the breakdown turnover as a result.

Munster had a sniff of a chance down the right early in the second half but Conway’s kick ahead rolled dead, then they needed to muscle up defensively as Beirne produced a trademark breakdown turnover penalty. They got some flow in their attack off the subsequent lineout, eventually drawing a tackle off the ball from Jack Whetton on Rory Scannell, allowing Crowley to kick Munster to within a point at 7-6.

Munster had some momentum now and scything carries from Haley and Farrell led to their next penalty as Castres failed to roll away and Crowley gave is team the lead from in front of the posts with 50 minutes played. Crowley had a frustrating error just inside the Munster 22 a couple of minutes later, though, knocking on a kick from Rory Kockott – who had replaced Arata Perrone in the first half – and handing Castres an attacking platform.

The French team turned it into a scrum penalty as their pack powered up and Botica nudged them back in front with a left-footed penalty 10 metres in from the right-hand touchline.

Kockott soon had a drop-goal attempt from the halfway line and it flew impressively only to drop just under the crossbar, the scoreline staying at 10-9 in Castres’ favour.

With 20 minutes left, van Graan made five changes as Murray and Earls were among those replaced, Craig Casey and Shane Daly coming on for the experienced backline duo.

Munster needed calm heads and field position but instead they gave up a sloppy penalty amidst more Castres pressure, Haley needlessly tangling with Kockott off the ball. Botica punished them off the tee for a 13-9 lead with 13 minutes left.

The visitors responded by surging into the Castres 22 but again, they offloaded inaccurately as Crowley inadvertently popped the ball into welcoming French arms. 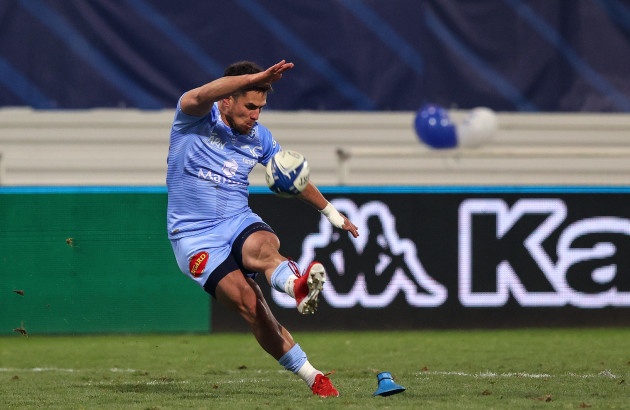 Munster needed a big play and John Hodnett, just on for Jack O’Donoghue, delivered with a big surge up the middle of the pitch for Castres to concede a penalty in their panicked retreat.

It was very kickable in front of the posts with nine minutes to go but Munster opted to go into the left corner instead, only to see Castres captain Jacquet rise and win the lineout metres from his own tryline. Munster compounded the turnover by giving up a penalty and letting Castres out all too easily.

With 77 minutes played, they got another chance down in Castres’ 22 on the left-hand side and Coombes notched the deciding score,