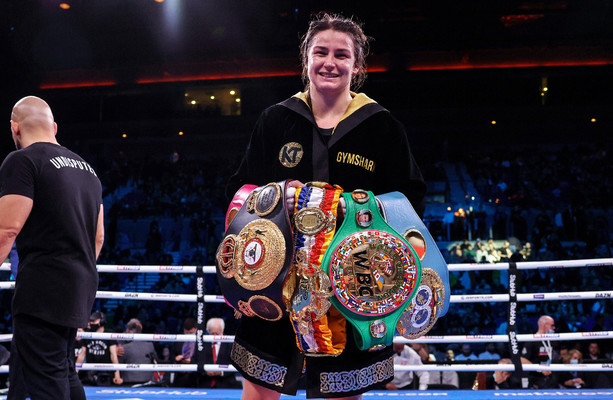 KATIE TAYLOR IS “on the brink” of having a monumental, long-awaited showdown with Amanda Serrano finalised, her promoter Eddie Hearn says.

The undisputed lightweight champion of the world most recently saw off Firuza Sharipova of Kazakhstan in Liverpool in December, in the last of her three fights in 2021.

Immediately after the pre-Christmas scrap — and even beforehand — the general focus was on a potential Serrano showdown, however.

And it looks like the details are almost set in stone, with an April 2022 date in New York expected to be confirmed soon.

“The contracts are getting finalised at the moment. We’re on the brink now,” Hearn told The DAZN Boxing Show.

“That’s the biggest fight in the history of female boxing. And it’s going to be a massive fight for boxing in 2022.

Bray boxer Taylor is 20-0 as a professional, and holds the WBC, WBA, WBO and IBF belts.

Puerto Rican southpaw Serrano (42-1-1) is a seven-weight champion, with the pair’s previous May 2020 Manchester date put on ice due to the Covid-19 crisis.

Eddie Hearn said today that contracts are being finalized for the Katie Taylor-Amanda Serrano undisputed female lightweight title fight. ESPN is told the fight could land on April 30 and that all parties, including MSG, are committed to main arena rather than Hulu Theater.