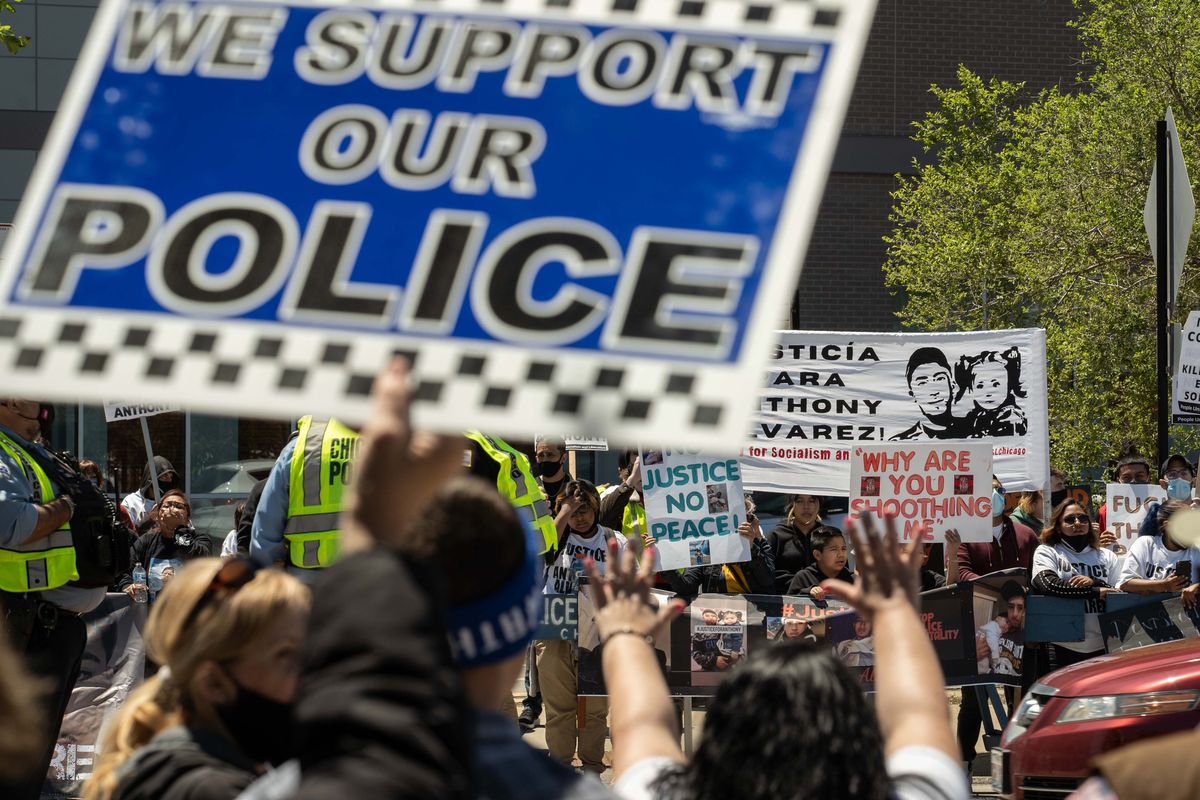 A rally to bring attention to the fatal police shooting of Anthony Alvarez drew counterprotesters Saturday, leading to one arrest amid verbal sparring between the two groups outside a police station in Jefferson Park.

Protesters, including members of Alvarez’s family, held their rally outside the Jefferson Park district station, at 5152 N. Milwaukee Ave., to call for greater police oversight and for charges to be filed against the officer who fatally shot the 22-year-old man in March.

“It’s not a [counter] protest … it’s just our rally to show [police officers] that this world is not about these people,” Sposato said about people who protest police. “It’s about our kind of people.”

Both sides drew around 100 supporters, with Milwaukee Avenue serving as a porous barrier between the two groups. On at least three occasions, members of the Back the Blue rally crossed police barricades put in place to keep them off the street and got into verbal altercations with members of the protest.

A man, who had a confederate flag patched on his leather vest, blared a loud horn as he repeatedly rode his motorcycle by the group supporting the Alvarez family. After several passes by the protesters, some began throwing water at him.

Brian Ceja, 19, was taken into custody after he allegedly hurled a blue Gatorade bottle at the motorcyclist and was charged with misdemeanor counts of battery and reckless conduct, police said.

Video of the Alvarez shooting released last month by the Civilian Office of Police Accountability, which investigates police shootings, shows an officer shoot Alvarez in the back as he ran from police while holding a gun in his hand.

Chicago Fraternal Order of Police President John Catanzara stood alongside the police supporters, occasionally mocking the opposing crowd from across the street.

Protesters also pointed to a recent altercation involving the same officer after he was recorded on video last week pulling a gun on a motorist during an apparent road rage incident in Logan Square.

The officer, whom the Sun-Times is not naming because he hasn’t been charged, is being investigated in both incidents.

Manjee said the second incident showed the officer’s conduct was part of a pattern of behavior and that he should be fired and charged in both cases.

Alvarez’s cousin, Roxana Figueroa, said she was angry when she saw video of the officer’s encounter with the motorist.

“We need him to get arrested and we need to finally get some peace in our family, and for Anthony to finally rest in peace because I know for a fact that he is not resting in peace right now,” she added.