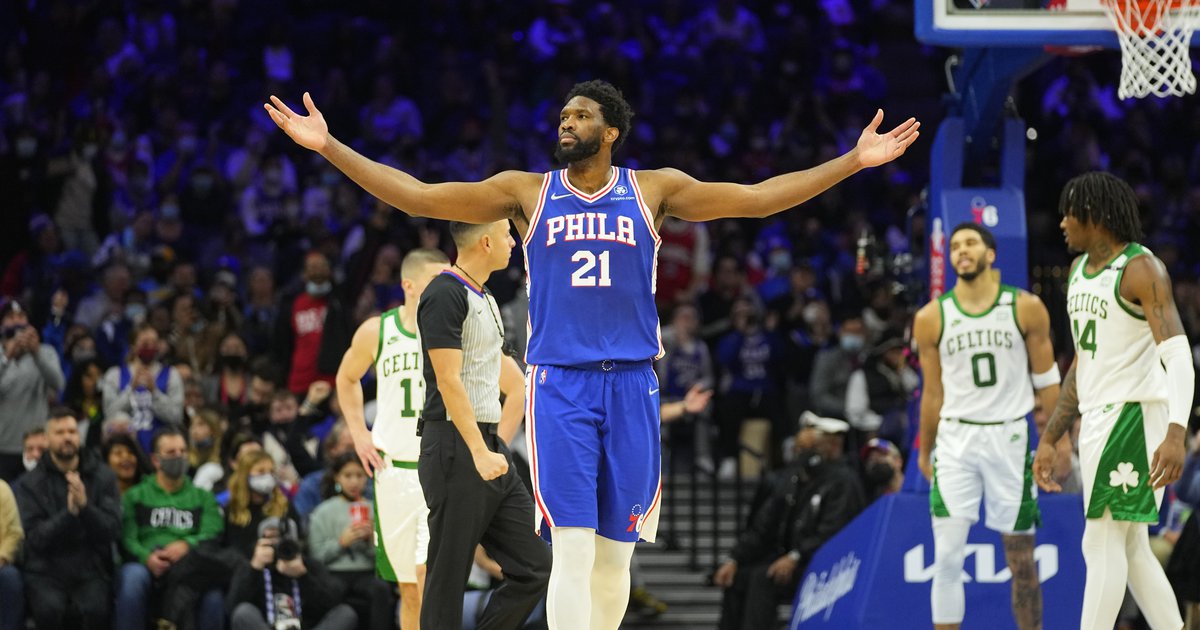 The question of whether the Sixers are supporting Joel Embiid enough has been a topic of much debate so far this season, heating up whether they are in the midst of a dry spell or going on a winning streak. When they’re good, the Sixers are said to be letting him down by not giving him enough surrounding talent for a run at a title. When they’re bad, it’s because they haven’t done enough to help him.

Here’s the thing — both of those ideas might be true. We’re talking about a player in such sharp MVP form that his 25-10-4 outing against the Celtics qualifies as a down night offensively, a “disappointment” in the sense that he couldn’t break a tie with Wilt Chamberlain and Allen Iverson in the franchise record books. It is easy to feel like he is owed more than a $30 million gap in the lineup. But Embiid isn’t willing to concede that, as he went out of his way to note during his postgame presser on Friday night.

“When I look at where we are when we’ve got most of the team healthy, especially me in the lineup, I think we are 21-9. That’s not bad,” Embiid said. “That’s up there with the best records in the NBA. All that tells me is we just got to stay healthy, keep doing what we’ve been doing…these guys just allow me to do what I do best offensively and defensively.”

“I feel pretty good. I don’t think we’ve played our best basketball yet, we still got a long way to go, we’re missing guys here and there that could really help us. There’s really no urgency to change anything. We’ve got everything we need, we’re going to keep on going and I’m happy.”

On the one hand, this is a reflection of Embiid’s increased awareness in the role of franchise spokesman. The guy who kept tabs on people’s tweets for years and years is certainly aware of the message being delivered on Ben Simmons trade talks. He is a central figure in the stance Philadelphia has taken to this point. So far, he is in the boat with management and ownership on letting this go as long as it needs to, and his public quotes are a part of that alignment.

But you do get the sense that Embiid is being truthful here, at least on some level. He is not the sort of guy who wants to be viewed as actively searching for help or looking for excuses, and his play shows a level of trust and confidence in his teammates that hasn’t often been there. At every opportunity, he has acted like the big brother of the team for the younger guys, playfully teasing Tyrese Maxey and Matisse Thybulle in press conferences to push them in the direction he feels they should go.

That last part certainly seems to be working. Their role players have been quicker on the trigger from deep recently, and Maxey was prolific from beyond the arc on Friday night, making 5/7 threes on a variety of looks from all over the floor. In an Instagram post shortly after the game, Embiid paid homage to his young running mate, calling him “THE FRANCHISE” in all caps underneath a photo of the two on the floor together.

The poking and prodding from Embiid seems to make a difference, though the whole team (coaches and players alike) has gotten behind Maxey to be the version of himself they all know he can be.

“Shoot when I’m open now,” Maxey said Friday. “Everybody’s been telling me about pumping and running into floaters, shooting contested twos instead of, you know, trusting my work. I just [got] to keep shooting when I’m open and trying to make plays for others as well.”

Trusting and empowering Maxey has had its limits. He gets bumped off to the side from time to time in the offense, relegated to a standstill position while others handle the initial creative responsibilities. Still, his progress has been plain to see, and the increased trust Embiid has shown in him is shown on the tape, which is what matters more than some press conference fluff. The current trade market has brought Maxey’s role and importance here into focus just that much more, with Sixers sources consistently pushing back on rumors that involve players who might overlap with their 21-year-old guard.

Given the chance to clarify his initial comments on what they have, Embiid was asked whether it means he thinks they have enough to accomplish all they want to this season. Staying consistent with the message he has sent all season, Embiid said yes.

“I think so. I think we all got to be our best and when we are at our best I think we can beat anybody,” Embiid said. “We’ve seen it a couple of times this year. I just think we need to, I need to keep doing what I’ve been doing. And then obviously we need consistency from everybody, not just Tobias, Tyrese, and Seth, or Danny, you know, guys coming off of the bench, getting Shake back. We need consistency, everybody coming in every single night with the goal of just doing their job, chipping in offensively and defensively, just playing together, and we’ll be fine.”

Delivering that message now, with almost a month to go before the trade deadline, is much different than Embiid delivering it after the dust has settled. There’s no real cost to playing politics right now, especially if Embiid has any indication that reinforcements are on the way at some point. Hold down the fort for a month, and a reward in form of arriving talent might be waiting for him and the rest of these guys. If the cavalry never comes, that’s when we’ll learn whether Embiid’s words are hot air or a true reflection of his feelings. Historically, he hasn’t always masked his feelings well, whether he lashes out with a tweet or on-court body language that tells the real story.

If nothing else, we are seeing the evolution of Embiid the statesman, ambassador for all things basketball in Philadelphia. He knows the stakes of the next month. We can debate the blend of fact and fiction behind his message, but we can’t argue this point — they win a lot of games when he is simply available to play. We’ll see which direction that pushes the franchise in after February 10th.