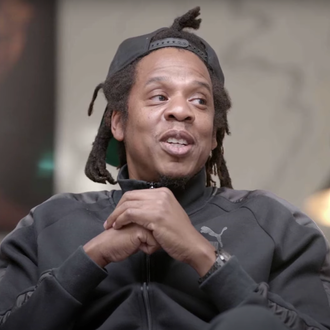 The fourth season of LeBron James and Maverick Carter’s talk show The Shop: Uninterrupted premiered on HBO this past Friday, and they kicked things off with a roundtable of WNBA player Nneka Ogwumike, series co-creator Paul Rivera, Bad Bunny, and Jay-Z. The highlight of the shop talk was when Jay-Z shared his “fondest memory of DMX,” which was when the late rapper opened for Jay-Z on his Hard Knock Life Tour in 1999. Jay-Z relives the moments before the first performance: “X is about to go on, and I want to see. X is going before me. And then he goes [growls], and the arena goes crazy. It’s deafening, and I’m like, ohhhhh shit,” at which point Jay-Z grabs his face, Kevin McAllister style. Jay-Z goes on to describe all the ways that DMX was an impossible act to follow — his energy, the crowd cheering for him when he takes his shirt off halfway through the set. “First the guys are going crazy, now the girls are going crazy. And then he gets to the end, and he starts a prayer. And now they’re crying. The whole arena is crying! And they’re like … okay, now you go.”

In the episode, Jay-Z also recounted why he boycotted the 1999 Grammys in solidarity with DMX: “We both came out that year, he didn’t even get nominated. He had two albums, two number-one albums in the same year. They didn’t even nominate him. I won that year, for Rap Album. So my first Grammy win, I wasn’t even in the building, because I boycotted it for him. So there was a competitive thing, but it was big love. He was so competitive with me, I never met a human being more competitive with me. Ever. Not even my big brother.” Jay-Z’s Shop: Uninterrupted interview occurred the same day as the release of his DMX and Nas collab, “Bath Salts.”