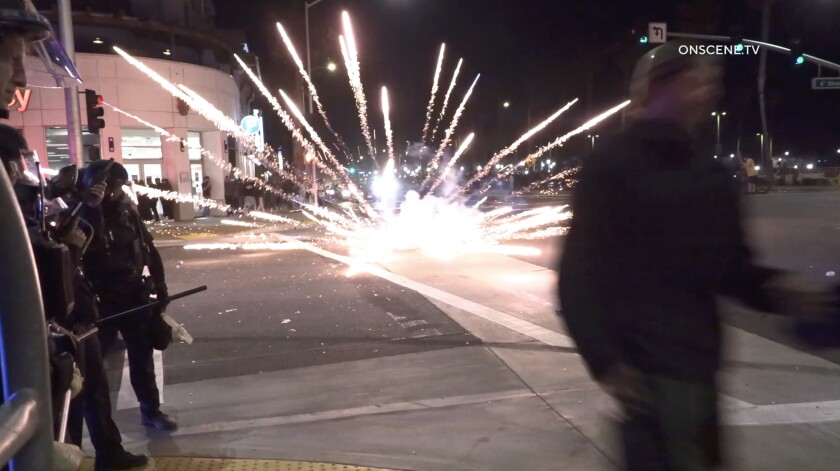 But nothing prepared officials for “Adrian’s kickback,” which started as a simple birthday party for an Inland Empire teenager and turned into a viral TikTok event that drew thousands to the beach last week — though not Adrian Lopez, who in the days leading up to the party was increasingly nervous about all the attention.

When it was over, more than 175 people were arrested, city officials and merchants were adding up the damage, and everyone was wondering who should be blamed and who should be billed.

The way Adrian’s birthday invitation went viral has alarmed city leaders, who say they are not sure how to deal with it. City Councilman Dan Kalmick is angry that police resources and taxpayer dollars were spent on what he called a prank. He said they have no easy answers for how to cope with the next viral video unleashed on popular platforms like TikTok that can get millions of views within days.

“It goes to the fact that government isn’t structured to deal with an amorphous entity of folks,” Kalmick said. “This wasn’t like a concert where we could talk to a promoter and issue a permit. When you have folks who don’t have a command or control structure, how does a city or police department manage that? I’m just not sure.”

“Adrian’s kickback” speaks to the power of the TikTok social media algorithm, which sent a post about the teen’s birthday far and wide. But it’s also in many ways a sign of the pent-up energy of young people desperate for fun after more than a year of pandemic lockdown.

“People my age haven’t gone out in a year,” said Edgar Peralta, an 18-year-old Downey resident who went to last Saturday’s party but said he does not condone the debauchery that ensued. “It was to get the ball rolling. This is the start of summer.”

The origin story of what became three days of unrest in downtown Huntington Beach is a familiar one.

For his 17th birthday, Adrian wanted to kick back with friends from school at the fire pits in Huntington Beach. Beach party celebrations are a tradition for many Southern California teens. But what happened last weekend was anything but ordinary.

The high schooler’s invitation was picked up by TikTok’s “For You” algorithm and viewed by people across the country. The announcement was curious: Who was this mystery teen, and would anyone actually go to his party? Some TikTok users, including internet celebrities, began posting about it, and videos with the hashtag #adrianskickback have since drawn more than 326 million views.

On Saturday night, roughly 2,500 teenagers and young adults — some who say they drove for hours or flew in from other states — converged on the Huntington Beach Pier and downtown area in a gathering that devolved into mayhem.

Partygoers blasted fireworks into a mob in the middle of Pacific Coast Highway, jumped on police cars, scaled palm trees and flag poles and leapt from the pier into throngs of people below to crowd-surf. A window at CVS was smashed, businesses were tagged with graffiti, and the roof of Lifeguard Tower 13 collapsed after it was scaled.

“It was a festival atmosphere, but there was nothing to cause the end of it and that was the problem,” said Neil Broom, 53, who watched the revelry unfold as he checked in on restaurant staff at Duke’s Huntington Beach. “Literally they were playing in traffic on PCH.”

Authorities spotted the party announcement when it began circulating last week and immediately began staffing up in preparation for what was being billed as a weekend-long event. In all, more than 150 officers from nearly every police agency in Orange County were called out to the beach Saturday night to help get the crowd under control.

Clashes with police broke out Saturday, and officers fired rubber bullets and pepper projectiles as they tried to disperse the crowd. Eventually, authorities issued an overnight curfew to clear the streets. Partygoers also descended on Surf City on Friday and Sunday, but Saturday brought the largest group. The majority of those taken into custody over the weekend were not from Orange County, police said.

The pier and downtown district have seen more than their share of problems over the years.

In 2013, violence broke out downtown after the US Open of Surfing. People smashed shop windows, pelted police with debris and tipped portable toilets into the roadway. The next year, organizers stopped hosting live music at the contest and limited alcohol sales in an effort to tamp down on potential illegal activity.

But Adrian’s kickback was different.

Interim Police Chief Julian Harvey said he’s planned meetings with representatives from social media platforms, including TikTok, to identify ways for law enforcement to collaborate with the sites in an effort to “minimize the potential for incidents such as this to happen again in the future.”

A representative for TikTok did not provide a comment about “Adrian’s kickback” or any communication with city officials.

Many in Huntington Beach have questioned why so many young people would travel to attend a party for someone they don’t know. One reason is to simply get out of the house post-pandemic, but the human desire to be part of something big plays a role as well, said Karen North, a professor of social media at USC.

“It’s the same reason people watch space shuttle launches. People want to be a part of that moment. They want to be able to say, ‘I was there when that happened,’ ” North said.

“All of this desire to be part of the popular topic or the trending event is amplified by social media because now it’s so global,” she said. “The sea change with social media is we feel we have a personal connection with people even when we don’t.”

The party’s aftermath comes amid national conversations about the role social media plays in the fallout from messaging spread across platforms. TikTok, which debuted in the U.S. in 2018 and is owned by China-based ByteDance, has faced pressure from the U.S. government over concerns about how the company handles data collected from U.S. users.

Cities like Huntington Beach may find it difficult to hold online platforms accountable for spreading information about events that turn violent or cause damage, North said.

“There’s a lot of discussion about what kind of responsibility social media platforms have for events or consequences of conversations that reside on their platform,” she said. “But for the most part, the platforms are protected because they’re hosting our conversations rather than writing, creating or editing their own content.”

Celebrities have used TikTok to connect with fans for years. Musicians have found success on the app, propelling their songs to widespread popularity. Now, some users say the platform and others like it are on the verge of becoming the next big party promoters.

“There are all these new people gathering through TikTok just because videos can go so viral so fast compared to YouTube or Instagram, where only your followers see it or it only shows it to other people,” said Andrew Denton, 21, who went to Huntington Beach on Friday and Saturday to get content for social media.

One of his videos showing a crowd swarming Lifeguard Tower 13 garnered 4 million views. His original following of 200 people quickly ballooned to more than 3,400, he said.

“I’m still kinda shocked this all went down,” he said.

The viral event phenomenon has been gaining momentum. Last month, hundreds of people with the name Josh connected over social media and gathered at a park in Nebraska to fight with pool noodles. In 2019, UFO devotees showed up at Area 51 in Nevada after a viral Facebook post advertised a raid of the site.

Gatherings hosted by TikTok influencers during the pandemic brought hundreds of guests to mansions in the Hollywood Hills last year in violation of public health orders. Triller, an L.A.-based company that operates a video-sharing app that competes with TikTok, planned to host a private launch party for influencers in the Hollywood Hills in November but later canceled.

“Adrian’s kickback” is already spurring talks of similar events across California and in other states, said Liam Garner, 17, of Los Alamitos, who attended the party in Huntington Beach.

“This incident with Adrian’s kickback is setting the precedent,” he said. “It’ll become more commonplace.”

While TikTok users from across the country were in Huntington Beach on Saturday, Adrian was in Los Angeles. He told the New York Times in an interview that he was concerned about the attention the event was getting online and decided to get a venue. They partnered with the Los Angeles-based streetwear store Cookies N’ Kicks to sell $40 tickets to the event, which was going to be held at an undisclosed space in Los Angeles that would be revealed Saturday night before the party, the paper reported.

The party address in L.A. leaked, and people — including the police — showed up at the venue. The crowd and police presence essentially halted the party before it had a chance to get started, according to a video posted by a teenage content creator named Donald, who goes by Donlad.

In a statement posted on his Instagram account on Monday, Adrian said he did not start or encourage illegal activity and did not make money from the event. He added that he’s not involved in any upcoming events or merchandise being sold under his name.

“Thank you for your patience and support,” he wrote. “These last few days have been very hectic and unreal. I have used this time to gather my thoughts and to see what is best for me and my family.”