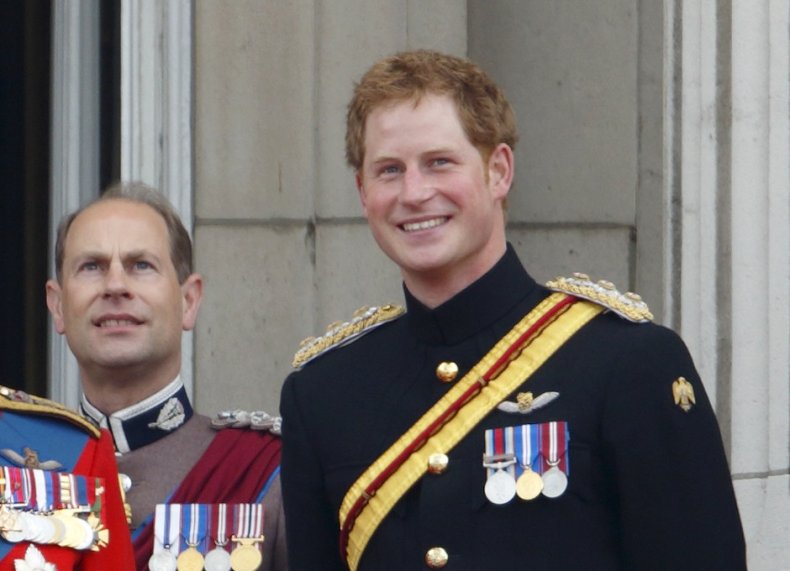 Prince Harry was stripped of his military titles despite the fact uncle Prince Edward—who dropped out of military training—has eight.

The Duke and Duchess of Sussex mark Memorial Day in California today, three months after Harry was stripped of his military titles.

As Americans prepare to honor those killed in war, the prince has an unresolved stand-off with his family back in the U.K.

Harry is a war veteran who has seen active service on the frontline in Afghanistan where he fired on the Taliban from an Apache helicopter.

However, having quit royal duties he is no longer allowed to wear his military uniform to royal events, such as Prince Philip’s funeral.

The palace also declined a request to lay a wreath on his behalf at The Cenotaph monument in London, in November, on Remembrance Sunday, Britain’s Memorial Day.

The same cannot be said of other family members who have not seen war, including Prince Edward who quit just four months into training for the Royal Marines.

While Edward may have had good reasons for dropping out of training, he went on to be handed eight ceremonial military appointments.

Among them are Royal Colonel of 2nd Battalion The Rifles, Royal Honorary Colonel of the Royal Wessex Yeomanry, and The London Regiment as well as Commodore-in-Chief of the Royal Fleet Auxiliary.

The queen’s fourth son also wears a series of medals and on one occasion in 2017 The Sun counted seven.

At Prince Philip’s funeral, Harry was photographed wearing three medals on his chest plus the neck order and star for his Knight Commander of the Royal Victorian Order honor, given by the queen in 2015.

Among them was the one he received for his tour of duty in Afghanistan, as well as medals for the queen’s gold and diamond jubilees.

In front of him in the procession was Edward, wearing at least five across his chest, plus the star for his Knight Grand Cross of the Royal Victorian Order honor.

A the time Prince Edward quit, Colonel Ian Moore, his commandant, was reported in The Guardian as saying the decision was “for very honorable reasons.”

He was quoted as saying: “Let me make it quite clear that he was doing well in his training.

“He was respected by his instructors, who all had a lot of time for him. He had all the physical ability to complete his training satisfactorily – indeed well.

“He got a very good report from Major Bancroft out of his initial training and all the indications are he had a good career ahead of him.

“There is disappointment here, but we do understand and all members of the corps feel the same way. He left with very warm regards for us and us for him.”

When Prince Harry was stripped of his military titles, the palace released a statement: “The Duke and Duchess of Sussex have confirmed to Her Majesty The Queen that they will not be returning as working members of The Royal Family.

“Following conversations with The Duke, The Queen has written confirming that in stepping away from the work of The Royal Family it is not possible to continue with the responsibilities and duties that come with a life of public service.

“The honorary military appointments and Royal patronages held by The Duke and Duchess will therefore be returned to Her Majesty, before being redistributed among working members of The Royal Family.”

The Royal Family’s website states: “The Earl of Wessex supports the work of the Armed Forces both in the United Kingdom and abroad, holding a total of eight Military appointments.

“In 2007, The Earl of Wessex became Royal Colonel of 2nd Battalion The Rifles following the reorganisation of the Infantry.

“He regularly visits the Battalion at their base in Northern Ireland and has visited them on several occasions while on operational duties, including in Afghanistan.

“His Royal Highness is Royal Honorary Colonel of the Royal Wessex Yeomanry and The London Regiment and meets servicemen and their families whenever possible.

“In 2006, The Earl was appointed Commodore-in-Chief of the Royal Fleet Auxiliary and in 2008, Honorary Air Commodore of Royal Air Force Waddington.

“The Earl holds three military positions in Canada, as Colonel-in-Chief of the Hastings and Prince Edward Regiment, the Prince Edward Island Regiment and the Saskatchewan Dragoons.”

6. Medal commemorating the Silver Jubilee of the Sultan of Brunei

7. Medal commemorating the Golden Jubilee of the Sultan of Brunei