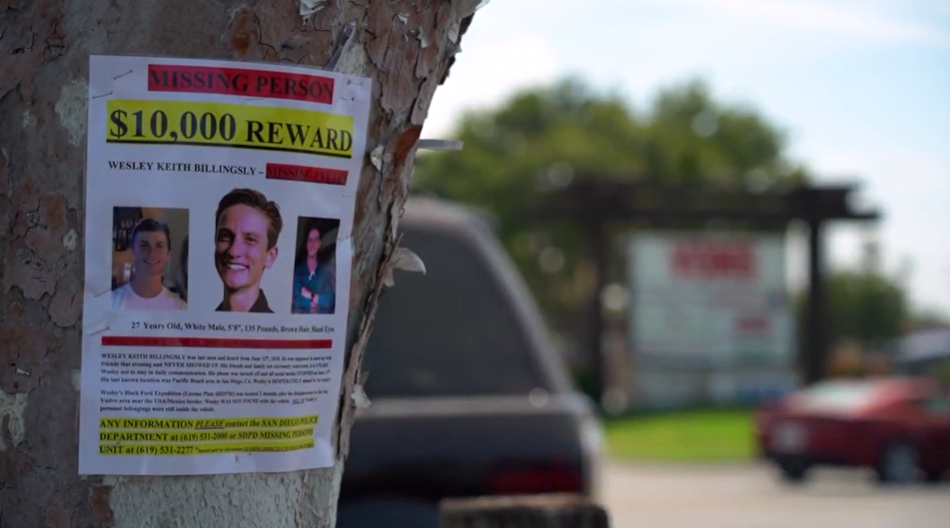 Christel Billingsly lives in Sacramento. She flew to San Diego to meet NBC 7 for an interview, hoping to bring more attention to her son’s somewhat forgotten case.

We met in the VONS parking lot on Garnet Avenue in Pacific Beach. It’s a place where her son, Wesley Billingsly, shopped frequently until his disappearance nearly three years ago.

“Everything is connected to your child,” Christel Billingsly said. “People say ‘Well, his birthday must be hard.’ Well, Christmas is hard, Thanksgiving is hard. Easter is hard. Summer is hard, it’s just constant.”

She was a single mom, raising three kids, including Wesley. She says their family unit was always extremely close.

A graduate of San Diego State University, Christel Billingsly describes her son as outgoing, positive, and smart. Wesley Billingsly had an apartment and a job at an advertising agency. When she asked how he was doing, Wesley Billingsly told his mom things were “going great.” He spoke to his mom and two siblings frequently, by phone or text.

What Christel Billingsly didn’t know was that before he disappeared, Wesley Billingsly was couch surfing at friends’ houses in Pacific Beach. He apparently missed the rent on his apartment and his roommates asked him to leave. He also lost his job at the agency.

On the day Wesley Billingsly disappeared, he was texting with his brother. After that, there were no calls, texts, or social media posts from the 24-year-old — something his mother said is far from the norm.

NBC 7 Interviewed Christel Billingsly shortly after Wesley disappeared in 2018. She told us then, “He’s never done this and it’s now like he’s dropped off the face of the earth. And we’re searching for him. I don’t know where he is but I need to know where my son is.”

In March 2019, the San Diego Police Department found Wesley Billingsly’s black Ford Expedition abandoned on a city street in the South Bay. Inside the truck, detectives discovered some of Wesley’s personal belongings, but he was nowhere to be found.

Christel Billingsly returned to San Diego multiple times in the months following Wesley’s disappearance. She put all of her energy into posting fliers in the Pacific Beach area and the place where his vehicle was located. The fliers feature Wesley Billingsly’s smiling face and a reward offer of $10,000.

She estimates she has posted 5,000 fliers in the past three years. She says she never returns to the area where she posts them, for fear that someone will have taken them down.

Although unimaginable to many, Christel Billingsly’s heartache is sadly not uncommon.

The police department couldn’t give NBC 7 the exact number of people reported missing so far this year, only saying the number is “on track to be the same” as 2020. But they did say that as of now, there are 53 open missing adult cases.

“The majority of cases, the person ends up being located because they return home.  With an at-risk situation, the first two days can be critical; I would even argue the first 24 hours,” Sgt. Tien said.

“Being that we are so close to the border with Mexico, it’s not uncommon to have family or loved ones provide information about the person who is missing, who may have crossed the border,” Sgt. Tien said.

Christel Billingsly said she never knew of her s crossing into Mexico and can’t imagine her son doing so. Still, she didn’t want to leave any stone unturned, so she and her brother went to Tijuana. Mexico in November 2018. They went to hospitals and jails looking for Wesley with a translator. She says they spent hours at the local morgue looking through thousands of black-and-white photographs of unclaimed corpses, but Wesley Billingsly was not among them.

“The Billingsly case is currently open and we follow up on tips as they come in,” Sgt. Tien said. “The last tip we received was just a few months after Wesley went missing. Hence, we appreciate you highlighting the case. We hope we get some good information in the near future.”

In Oceanside, 349 missing people were reported in 2020. Information was not provided for 2021.

NBC 7 asked the department why they labeled all juveniles as “runaways.”  A spokesperson for the department said, “This is based on the information received by the reporting party. Most runaways have a history of doing so, or there were statements made, or other signs of evidence they left voluntarily. If we believed a juvenile was truly missing, we would classify and investigate it as such, as the potential danger is increased.”

Of course, to people like Christel Billingsly, these numbers, especially the number of open cases, are of great significance. Each one represents family, friends and mothers who continue to search and hope for a breakthrough.

“People have moved on and life has gone on, and he is still missing,” Christel Billingsly said. “Life hasn’t moved on for me and my family. We are still searching for him.”

Christel is also offering a reward for information on her son’s whereabouts. She says she can’t simply rely on the police department to help find her youngest child, her “baby,” when she lives with constant questions that torment her: “Is he still alive? Is he not alive? Is he out there? Is he not? I mean did someone hurt him? Did someone do something to him? He didn’t just disappear, he didn’t just fall off the face of the earth and disappear. I believe someone knows what happened to Wesley.”

If you have any information on the disappearance of Wesley Billingsly, you can report it to San Diego County Crime Stoppers.