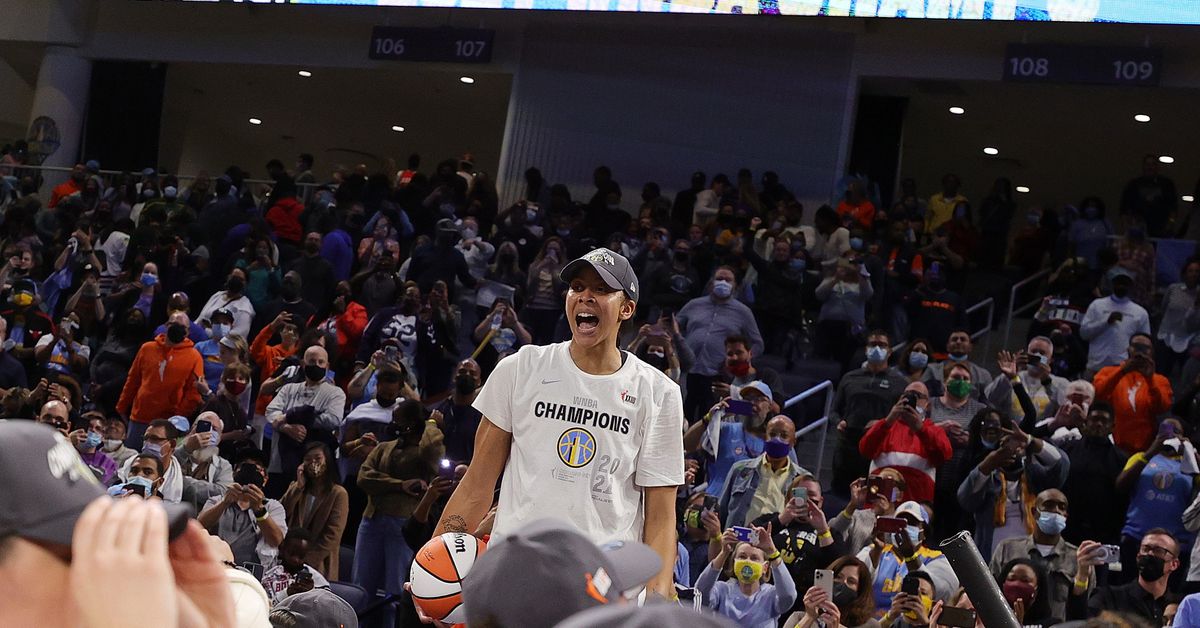 The WNBA’s 25th season was marked by celebrations, the launch of the Commissioner’s Cup and ‘‘The W25,’’ a collection of 25 of the greatest and most influential players in the league’s history.

Fans voted Diana Taurasi as the GOAT, and that honor was announced before Game 1 of the WNBA Finals, which featured the fifth and sixth seed playing each other for the first time under that playoff format. It all culminated with Candace Parker leading the Sky to their first WNBA title five years after winning her first with the Los Angeles Sparks during the league’s 20th season.

How does the WNBA not only follow that but also capitalize on the attention and excitement generated from year 25?

An excellent place to start would be with the merchandise.

On Dick’s website, there are two jerseys — Diamond DeShields and Courtney Vandersloot — available for purchase in youth sizes. In adult sizes, DeShields’ jersey is the only one available. When Kahleah Copper was named WNBA Finals MVP, fans rushed to buy her jersey only to find it unavailable.

After Parker was named AP Player of the Year for the second time in her career, she took to Twitter to express her displeasure that her jersey was nowhere to be found.

“Humbled and thankful for the honor,” Parker wrote on social media. “Now, if only my jersey could be available for people (INCLUDING MYSELF) online, in stores or in the metaverse. That’d be great.”

The increased visibility jersey sales provide in a saturated sports market like Chicago is critical.

WNBA Commissioner Cathy Engelbert ensured the issue has her attention and said it’s a good problem to have when demand outstrips supply. Engelbert said the league is working with partners on shortening lead time, specifically with jerseys.

One solution she said the league is looking to create is a resource that could direct fans to every retail outlet that has WNBA merchandise available. Engelbert also suggested that fans could custom-make a jersey on the WNBA’s merchandise page, but the Sky jersey is unavailable to customize.

When Engelbert took over as commissioner in 2019, she came in with a five-year transformation plan. The pandemic has impeded the first two years, with 2020 being played in a closed setting at IMG Academy in Bradenton, Florida, and the 25th season being played mainly in front of limited-capacity crowds.

Despite pandemic challenges, viewership grew. The 25th season was the most-watched since 2008, with an average viewership of 321,000 across ESPN, ABC and CBS during the regular season, up 51% from 2020. Games 3 and 4 of the WNBA Finals were played in front of sold-out crowds at Wintrust Arena.

“The exposure in 2021 is helping set the stage for continued success in 2022,” Engelbert said. “It comes back to the evaluation of our assets. Whether it’s placement on the court or a patch on a uniform, exposure, media rights and filling seats, Chicago’s success and the success of the overall season will help drive that value up.”

The league launched the WNBA Changemaker platform in 2020 with inaugural partners AT&T, Nike and Deloitte. In 2021 Google became the fourth company to join that platform. Engelbert said the league is hoping to add another company soon.

This week, Colie Edison joined the WNBA as the league’s first-ever Chief Growth Officer, another step Engelbert said is critical in capitalizing on momentum from the 25th season.

The league begins its 26th season on May 7, but free agency and the draft come first.

Part of the league’s strategy following the announcement of the groundbreaking eight-year collective-bargaining agreement in 2020 was to create an environment that gave way to a robust free-agent market. In 2021, the exposure the league envisioned garnering from free agency materialized in the form of Parker leaving the franchise that drafted her and where she won a championship to return to her home market.

This year, free agency has the potential to be even more explosive, and negotiations can start Saturday. Players can start signing contracts on Feb. 1.