When Furious Brewing Company debuts inside the former home of Joe’s Grotto later this fall, it will have a little DNA from the now-defunct north Phoenix rock bar and music venue running through its veins.

Steve Goodman, co-owner of the new brewery set to open at 13831 North 32nd Street, #32, tells Phoenix New Times they repurposed multiple elements from the 25-year history of Joe’s Grotto while renovating the property over the summer.

The venue, which was operated by owner Joe Grotto from 1994 to 2019, hosted hundreds of metal and hard rock gigs during its quarter-century run, including local and touring acts and artists like Alice Cooper, Flotsam and Jetsam, St. Madness, Otep, N17, and L.A. Guns.

“Joe’s Grotto was an epic part of Phoenix [music history] for years and years,” says Goodman, a former lead guitarist in late-’90s/early-2000s local metal band Dominion of Pain. “It was important to me, as a musician, to make sure we could preserve some of that legacy while bringing something new to the neighborhood.”

Support the independent voice of Phoenix and
help keep the future of New Times free.

That includes saving a pair of large mirrors covered in stickers from local hard rock and metal bands adorning the northwest wall of Joe’s Grotto, which closed in October 2019. Goodman says the mirrors are still in their original location and will be framed by a section of black wall with a drink railing built in front.

“It was a big deal for us to keep it around. Those mirrors are a history of music in the Valley and all the bands that played [at Joe’s Grotto]. My band played there at one point and our sticker is buried in there somewhere, too,” Goodman says. “We left them up so all these bands could still be talked about and remembered. People can sit at the drink rail and play Where’s Waldo? with their favorite metal bands.”

Goodman says various guitar picks (and even a drumstick or two) they found while renovating the property will be lacquered onto the top of the drink rail in front of the mirrors.

The sticker-covered mirrors from Joe’s Grotto inside Furious Brewing Company.

The brewery’s co-owners, which also includes Chef Lindsay Gordon (formerly of Helluva Brewing Company in Chandler and Tempe’s Cotton & Copper), are also using wood hewn from the enormous stage inside the main room of Joe’s Grotto to build various two- and four-person tables throughout the place. Goodman says it’s another way of tipping their hats to the venue’s history and “wasn’t because we couldn’t afford new tables.”

“As a metal fan, I saw Avatar, Static X, Motograter, and all these awesome bands play on that stage, and we wanted that mojo to be in everything,” he says. “So the table where you’re drinking beer at is where Wayne Static stood when he played here, which seemed like a cool idea.”

Goodman says the stage lumber was also used to create shiplap on Furious Brewing Company’s bar and a giant State of Arizona wooden art piece hanging on the wall.

Despite the property’s lengthy history as a venue, Goodman says live music won’t play a significant role in Furious Brewing Company’s future, save for hosting an occasional acoustic set by local musicians.

“We’ve been asked about that a lot, but we’re not going to be a music venue,” he says. “If time and space permits, then we’ve got no problem having some small [performances], but we don’t want to turn into another spot bringing in full bands and getting super loud. The neighborhood nearby has had enough of the noise after dealing with concerts going till early in the morning for more than 20 years, so we’re trying to be respectful of that.” 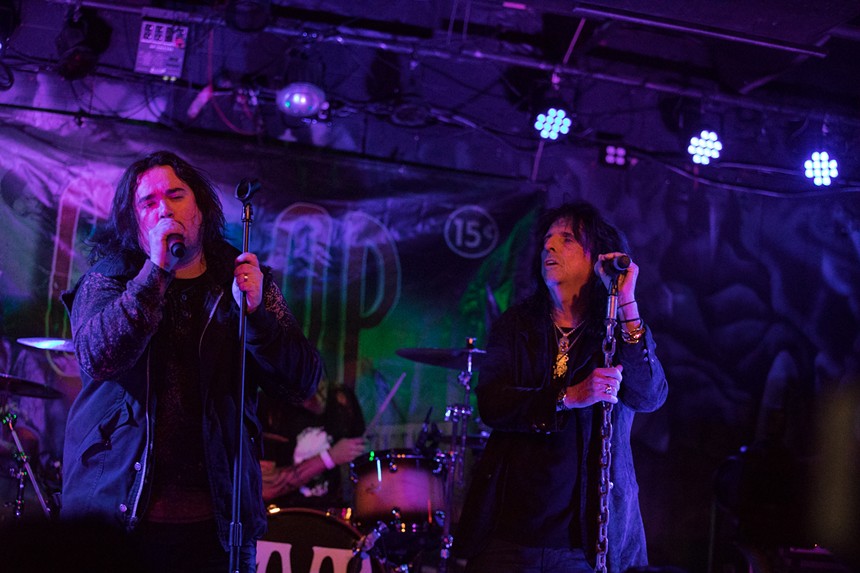 It’s not the only departure from the property’s history as Joe’s Grotto. Furious Brewing Company’s owners completely transformed the 5,000-square-foot space since signing a lease in early June. Black-painted walls have been eschewed for exposed cinder blocks. The side room hosting a second stage will become a lounge with couches and coffee tables. And most of the walls facing 32nd Street have been replaced with large windows offering views of the nearby Phoenix Mountains Preserve.

“Opening all of that back up and getting all those giant windows back in there allows perfect views of the sun setting over the mountains,” Goodman says.

They’ve also built a small in-house brewing system for creating two or three signature drafts at first — including a West Coast IPA, hazy IPA, and California common — with plans for expanding their tap lineup in the future. (“Because of the pandemic, getting ahold of big brewing system has been hard,” Goodman says.) There will also be a kitchen, which will eventually serve Furious Brewing Company’s take on “Arizona-centric barbecue” created by Gordon and smoked with locally sourced white oak.

Goodman says he hasn’t spoken to Grotto, who has been booking rock and metal concerts at The 44 Sports Grill & Nightlife in Glendale since July, about all the changes they’ve made. (Phoenix New Times was unable to reach Grotto for comment.)

“For the most part, Joe’s Grotto was kept very dark, and I can understand why [Joe] did that since you want to make it as dark as possible for shows,” Goodman says. “We’ve had to undo all of that because we wanted our brewery to be inviting and airy and bright, visually the exact opposite of what Joe’s Grotto was. At the same time, we’re trying to maintain some of the more recognizable pieces of its previous [identity] so part of its legacy will live on.”