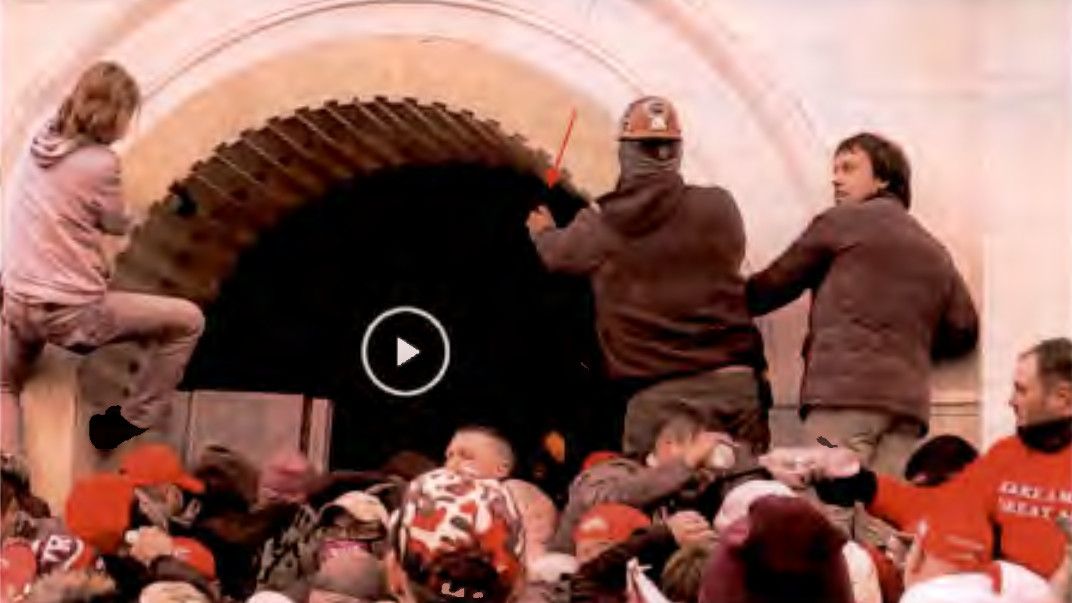 A soldier stationed at Fort Bragg is charged with assaulting police with chemical spray during the Jan. 6 attack on the Capitol.

Scenes from videos of Trump supporters attacking the Capitol on Jan. 6 show a man in a distinctive red or brown hardhat approaching a tunnel that leads into the building. Hundreds of protesters try to fight their way through lines of police inside the tunnel.

Officers inside the tunnel have described a pitched battle with the former president’s supporters, who were trying to force their way in to stop the certification of the election results.

The man in the hard hat, identified by the FBI as James Phillip Mault, can be seen in the video spraying a chemical agent, possibly pepper spray, into the tunnel at police, according to an FBI affidavit.

What You Need To Know

Mault, a member of the U.S. Army, was arrested at Fort Bragg on Oct. 6, according to court records. The criminal complaint was unsealed by a federal court Wednesday.

Mault joined the military after the Jan. 6 attack, according to the Military Times.

The most serious charge of assaulting an officer with a dangerous weapon carries a maximum sentence of 20 years.

Video from inside the tunnel allegedly shows Mault spraying chemicals at officers during the attack. (Photo: FBI)

At the time of the attack on the Capitol, Mault was living in Rochester, New York, according to the FBI. He was identified as many others from the attack have been, by someone recognizing his face in images and video circulated on social media from the attack.

A confidential informant “claimed to have seen a picture of Mault inside the Capitol Building and was standing beside the killed police officer,” according to the FBI affidavit.

The FBI said agents interviewed Mault and his mother on Jan. 18. She told agents that her husband drove her son James and five others to the protest on Jan. 6, court records say.

According to the FBI, Mault admitted he went to the Jan. 6 protest, wearing the distinctive hardhat that agents later used to track his movements in photos and videos through the attack.

“Mault described being caught up in the crowd and the mass of people pushed him closer and closer to the Capitol Building. Mault claimed to have no choice but to move forward because of the press of people behind him,” according to the FBI.

“Mault ended up right next to an entrance to the Capitol Building but denied entering the Capitol Building. Mault also denied assaulting anyone or damaging property. Mault acknowledged witnessing law enforcement officers being assaulted and property destruction,” the affidavit said.

The Jan. 6 attack on the Capitol has turned into the biggest investigation in FBI history. Agents have arrested more than 600 people for their involvement in the attack. More than 185 of those arrested face charges of assaulting police.

Thousands of supporters of President Donald Trump gathered in Washington on Jan. 6 after the president falsely claimed the election had been stolen.

Trump supporters stormed the Capitol building as Congress met to certify the election of President Joseph Biden. The violence delayed the vote, but Biden was certified as the next president later that night.