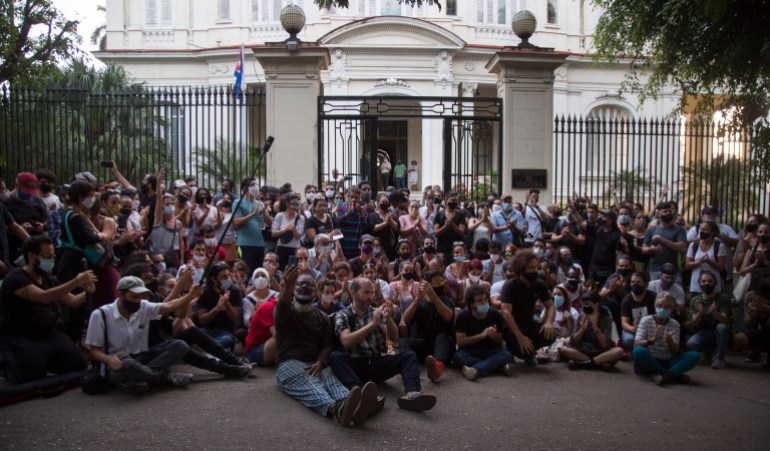 Luis Manuel Otero Alcantara, leader of the San Isidro protest movement, was admitted to hospital on May 2 after hunger strike.

A dissident Cuban artist who spent eight days on a hunger strike has been released from hospital, the Havana public health authority said on Monday.

Luis Manuel Otero Alcantara, the 33-year-old leader of the San Isidro protest movement (MSI) of artists and intellectuals pushing for greater freedom of expression, went on a hunger strike last month to protest against authorities seizing several of his works.

He was admitted to hospital on May 2, eight days into his hunger strike.

“After a month in the hands of the beast, we’ll see how things go in the streets to continue the struggle,” Otero Alcantara said in a video published by opposition media Cubanet.

He said state security forces had taken his mobile telephone and left him “literally a month without communication and with little access to my family”. adding that he would soon “recount everything that happened”.

The General Calixto Garcia university hospital where he was treated had earlier announced “his complete recovery” and said Otero Alcantara “reiterated his gratitude to the personnel that looked after him at every opportunity”.

In the early days of his hospital stay, authorities released videos of him appearing in good health but those close to Otero Alcantara said they had been unable to communicate with him.

“I’m really happy and relieved, he’s at his family home now at least,” Otero Alcantara’s friend and fellow activist Iris Ruiz told the Reuters news agency after his release. “There was so much uncertainty before.”

Amnesty International earlier this month described Otero Alcantara as a “prisoner of conscience”, saying state security appeared to have him under supervision and incommunicado at the hospital.

US State Department official Julie Chung had raised concerns about the activist’s condition when he was admitted to hospital and urged the Cuban government “to take immediate steps to protect his life and health”.

The United States Embassy in Cuba also said at that time that Otero Alcantara, like all Cubans, “deserves to be treated with dignity and respect”.

After his arrest last month, he was released but rearrested several times for trying to leave his home, which had been surrounded by police.

During his hunger strike, his internet service was cut off and police prevented people, including two priests, from visiting Otero Alcantara.

The MSI claimed he had been taken to hospital by force and that official medical reports on his condition were “confusing and contradictory”.

In a sign of solidarity, last week approximately 20 Cuban artists asked that their works in Havana’s Fine Arts Museum be hidden from public view. The museum rejected the request, saying it wasn’t in “the public interest”.

Painter Tomas Sanchez, 73, wrote on Facebook: “Cuban art is going through dark times … the criminalisation of difference is not – and never will be – a path towards coexistence.”

Members of the San Isidro Movement held a rare protest in front of the Culture Ministry in November against curbs to freedom of expression and the detention of artists and activists.

Since then, authorities have taken to state-run media to denounce its members and allies as agitators working with the US to destabilise the government. The group has denied the accusations.