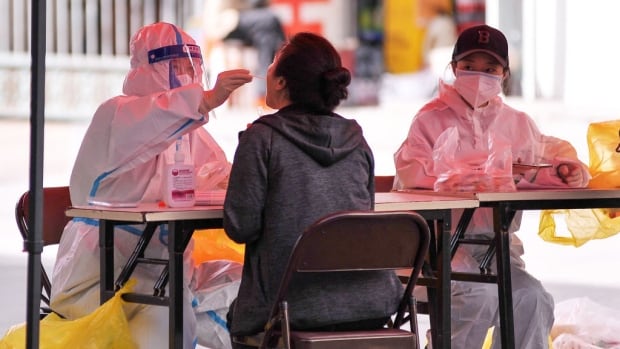 China’s capital Beijing urged all its local districts on Saturday to maintain “full emergency mode” as the city continued to report new local COVID-19 cases, less than two weeks before the start of the Winter Olympic Games.

A total of 27 domestically transmitted cases with confirmed symptoms and five local asymptomatic carriers have been found in Beijing since Jan. 15, Pang Xinghuo, an official at Beijing city’s disease control authority told a news conference on Saturday.

Elsewhere, the northeastern city of Harbin will conduct a city-wide exercise to test its roughly 10 million people for COVID-19 starting Monday. The city, which has had no recent cases, is calling it a pre-emptive move ahead of the long Lunar New Year holiday.

The city government said on its official WeChat account it had made the decision in view of how the week-long holiday, which officially starts on Jan. 31, was a peak travel period for the country.

Cities across China have in recent weeks imposed tougher restrictions to try to control new outbreaks of COVID-19, a task that has also taken on extra urgency as Beijing prepares to host the Winter Olympics at the start of February.

Many cities have advised residents to stay put or are requiring travellers to report their trips days before their arrival.

Some restrictions were lifted in Xi’an, a city of 13 million in western China, last Sunday after a three-week lockdown that was imposed to stop the spread of an outbreak blamed on the coronavirus’s Delta variant. The severity of the measures prompted complaints about food shortages.

The first commercial airline flights in a month took off Saturday from Xi’an, about 1,000 kilometres southwest of Beijing.

Airline passengers who want to leave Xi’an are required to show a negative test within the past 48 hours, the official Xinhua News Agency reported. It said people from areas deemed at high risk for infection were barred from the airport.

Xi’an has reported 2,053 cases since Dec. 9. None were reported on Friday.

Ontario is among the provinces eyeing steps toward reopening as COVID-19 hospitalizations level off, but health officials and experts are warning there is plenty of pandemic still to come. 2:00

With lab-based testing capacity deeply strained and increasingly restricted, experts say true case counts are likely far higher than reported. Hospitalization data at the regional level is also evolving, with several provinces saying they will report figures that separate the number of people in hospital because of COVID-19 from those in hospital for another medical issue who also test positive for COVID-19.

For more information on what is happening in your community — including details on outbreaks, testing capacity and local restrictions — click through to the regional coverage below.

You can also read more from the Public Health Agency of Canada, which provides a detailed look at every region — including seven-day average test positivity rates — in its daily epidemiological updates.

In British Columbia, health officials on Friday said they are shifting their approach to managing the spread of the novel coronavirus. Provincial Health Officer Bonnie Henry said people who have been exposed to someone with a COVID-19 infection do not need to stay home because everyone can assume they have been in contact with someone who has contracted the virus, she said.

“We cannot eliminate all risk, and I think that’s something we need to understand and accept as this virus has changed and has become part of what we will be living with for years to come. But we can use all the layers of protection to keep our settings safe,” she said.

Henry said contact tracing is no longer an effective way of managing COVID-19’s spread. She encouraged people to check themselves every day for symptoms and stay home as necessary. She urged anyone who has not been vaccinated to do so immediately.

B.C. reported 2,364 lab-confirmed new cases and nine new deaths Friday, along with 924 hospitalizations. Of those patients, 130 were in intensive care units.

Teachers at a B.C. elementary school are refusing to work, citing unsafe conditions brought on in part by students refusing to wear masks in class. 1:52

In Central Canada, the provincial COVID-19 dashboard in Ontario on Friday showed 4,114 hospitalizations — up by 53 from a day earlier — and 590 people in intensive care units. The province also reported a total of 64 additional deaths and 7,165 additional lab-confirmed cases of COVID-19.

The update comes after Premier Doug Ford announced plans on Thursday to begin a gradual easing of COVID-19 restrictions over a period of months, with the first step to begin at the end of January.

In Atlantic Canada, New Brunswick Premier Blaine Higgs said Friday that the province has likely still not seen the peak of COVID-19 cases and hospitalizations.

“But our ability to manage the situation is improving, thanks to the dedication of multiple teams,” he said, noting that the province is seeing some positive signs, including a return of some health workers from isolation and a reduction in contacts.

The province, which is currently under tight COVID-19 restrictions, recently put out an urgent call for volunteers and workers to help with the pandemic response. The province saw a “huge” response, Higgs said, and work is underway to match offers to help to areas where assistance is needed.

Newfoundland and Labrador students will be back in classrooms on Tuesday. Students will have to take two rapid tests before returning to school. One of the tests is to occur 72 hours before they return and the other on the morning before classes begin. The province reported an additional 360 lab-confirmed cases on Friday.

In New Brunswick, officials reported two new deaths and 124 hospitalizations on Friday. Twelve of those patients are in intensive care units.

In Nova Scotia, health officials reported 94 hopsitalizations on Friday, 13 of which are patients in intensive care units. There were also 601 new lab-confirmed cases; no new deaths were reported.

In Prince Edward Island, health officials reported one death on Friday, along with eight hospitalizations and one patient in an intensive care unit. The province also reported 267 lab-confirmed new cases of COVID-19.

In the Prairie provinces, Manitoba health officials on Friday reported 827 new cases and said a total of 664 hospitals, with 50 people are in intensive care units. The province also reported eight additional deaths.

Saskatchewan on Thursday reported 215 hospitalizations, with 23 people in intensive care units. According to the province’s COVID-19 dashboard, there were no additional deaths and 1,158 additional lab-confirmed cases.

In Alberta, health officials on Friday reported eight new deaths and 1,191 hospitalizations, topping Thursday’s record of by 60 cases. Of those, 107 patients were in intensive care units. Lab tests also confirmed 3,592 cases of COVID-19. Premier Jason Kenney announced Thursday that 610 nursing students would be joining Alberta Health Services to help provide pandemic care, a move that some doctors fear points to a pending crisis in the province’s hospitals.

Across the North, Nunavut on Friday reported 20 new additional lab-confirmed cases, with no additional deaths. Health officials in the Northwest Territories and Yukon had not yet provided updated information for the day.

What’s happening around the world

European countries are starting to loosen their COVID-19 restrictions with Britain at the front of the pack despite the presence of some staggeringly high case numbers and concern from experts that it’s too soon. 2:02

As of Saturday morning, more than 346.3 million cases of COVID-19 had been reported worldwide, according to Johns Hopkins University’s coronavirus tracker. The reported global death toll stood at more than 5.58 million.

In Europe, Ireland is to scrap almost all its COVID-19 restrictions on Saturday after a major surge in infections did not lead to a significant increase in the numbers requiring intensive hospital care, a senior minister said.

Authorities have said the latest wave of the pandemic will drive case numbers to levels not yet seen in Poland, with estimates of the peak ranging from 60,000 to as many as 140,000 daily infections.

In the Asia-Pacific region, Hong Kong health officials warned on Saturday of a significantly worsening COVID-19 outbreak in the Asian financial hub as suspected infection numbers rose in a congested residential area.

Health officials said some 26 confirmed cases and more than 100 cases classed as preliminary positive were recorded on Saturday, centred on three buildings in the Kwai Chung district north of the Kowloon peninsula.

“It’s not easy for us to control the spread because we cannot trace all their whereabouts,” senior Health Department official Dr. Chuang Shuk-kwan said, referring to the 2,700 residents as well as workers and visitors linked to the building at the centre of the outbreak.

On Friday, officials shut down the building for five days.

In Africa, more than 10.5 million cases of COVID-19 have been confirmed on the continent since the start of the pandemic, with about 234,000 deaths, the World Health Organization’s regional office for Africa tweeted on Friday.

Matshidiso Moeti, the WHO’s regional director for Africa, said there are been a “significant drop” in new cases and a “promising dip in reported deaths” for the first time since the start of the Omicron-fuelled fourth wave.

She said cases fells by 20 per cent in the week before Jan. 16, while the number of deaths dropped by eight per cent.

New projections from a research group in the U.S. suggest that the pandemic will soon be over, even though COVID-19 is here to stay. 2:40

In the Americas, the U.S. has recorded more than 70 million COVID-19 cases since tracking of infections began, tallies by Reuters and NBC released on Friday show.