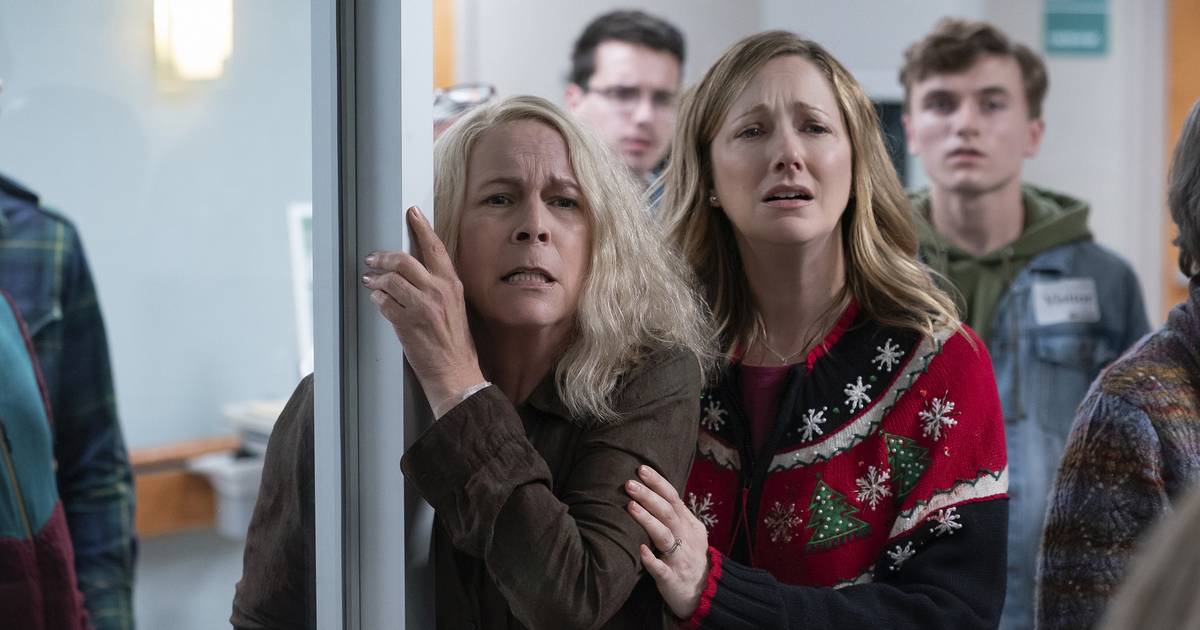 The poor folks of Haddonfield, Illinois, are having the worst and longest Halloween ever. It seems one movie wasn’t enough to contain Michael Myers’ 40th anniversary rampage.

“Halloween Kills” picks up at the moment David Gordon Green’s 2018 “Halloween” ended. Deputy Frank Hawkins (Will Patton) is bleeding out from a neck wound. Michael Myers is burning in a basement and Jamie Lee Curtis’ Laurie Strode is riding in the back of a pickup truck to the hospital with her guts literally spilling out alongside her daughter Karen (Judy Greer) and granddaughter Allyson (Andi Matichak).

The big problem is that “Halloween Kills” is less of a sequel than a half-baked interlude before the finale. It is a bloody, violent, chaotic and cynical mess and not even in a good or particularly scary or insightful way. Poor Laurie is stripped of anything exciting to do and is instead confined to a hospital where she’s recovering from having her organs put back together.

While it is admirable of Green and his co-writers Danny McBride and Scott Teems to commit to the reality of Laurie’s injury and not have her conveniently, immediately and miraculously recover, it is still a bummer that Jamie Lee Curtis doesn’t have more to do, especially if this is her penultimate showing in the role.

“Halloween Kills” attempts to tie the present to the past once more, often reflecting on the events of 1978. This is done through flashbacks, where a young, more skittish Deputy Hawkins (Thomas Mann) botches a chance to kill Michael, and by bringing back minor characters who evaded his knife the first time around.

So they have Kyle Richards, who has gone on to “Real Housewives” infamy, back as Lindsey Wallace, and Nancy Stephens as Marion Chambers. Tommy Doyle, the little kid Laurie babysat in 1978, has been recast again and this time is played by Anthony Michael Hall, who has a little support group going with his fellow survivors. They gather at a dive bar on Halloween to remember and pay tribute to the victims, but soon their ritual is interrupted by breaking news: He’s back and making his way through the town. Tommy rallies a vigilante mob to ensure that “evil dies tonight.”

The previous film was smart to delve into the idea of the generational trauma for characters like Laurie and her family. But this installment botches its loftier ambitions. As Michael racks up a remarkable kill count, “Halloween Kills” tries to get us to consider whether we’re the real monsters.

This would all theoretically be fine if we were following humans that we either cared about or who were at least entertaining to watch. These characters talk exclusively in trailer-ready quips that sound like parody. Aside from Laurie, the only people that I cared to know more about were the couple who live in Michael’s house and spend Halloween night watching John Cassavetes’ “Love Streams,” smoking marijuana and eating charcuterie. But like most everyone we meet in the film, Big John (Scott MacArthur) and Little John (Michael McDonald) are not long for the world.

It’s hard to overstate just how cluttered and ugly the film is too. How could it possibly be from the man who made lyrical and poignant indies like “George Washington” and “All the Real Girls”? But perhaps the biggest sin is that it doesn’t feel like a movie. “Halloween Kills” is a board-clearing pit stop.

Other: A Universal Pictures release. In theaters and on Peacock Premium. Rated R for language, grisly images, some drug use, strong bloody violence. 105 minutes