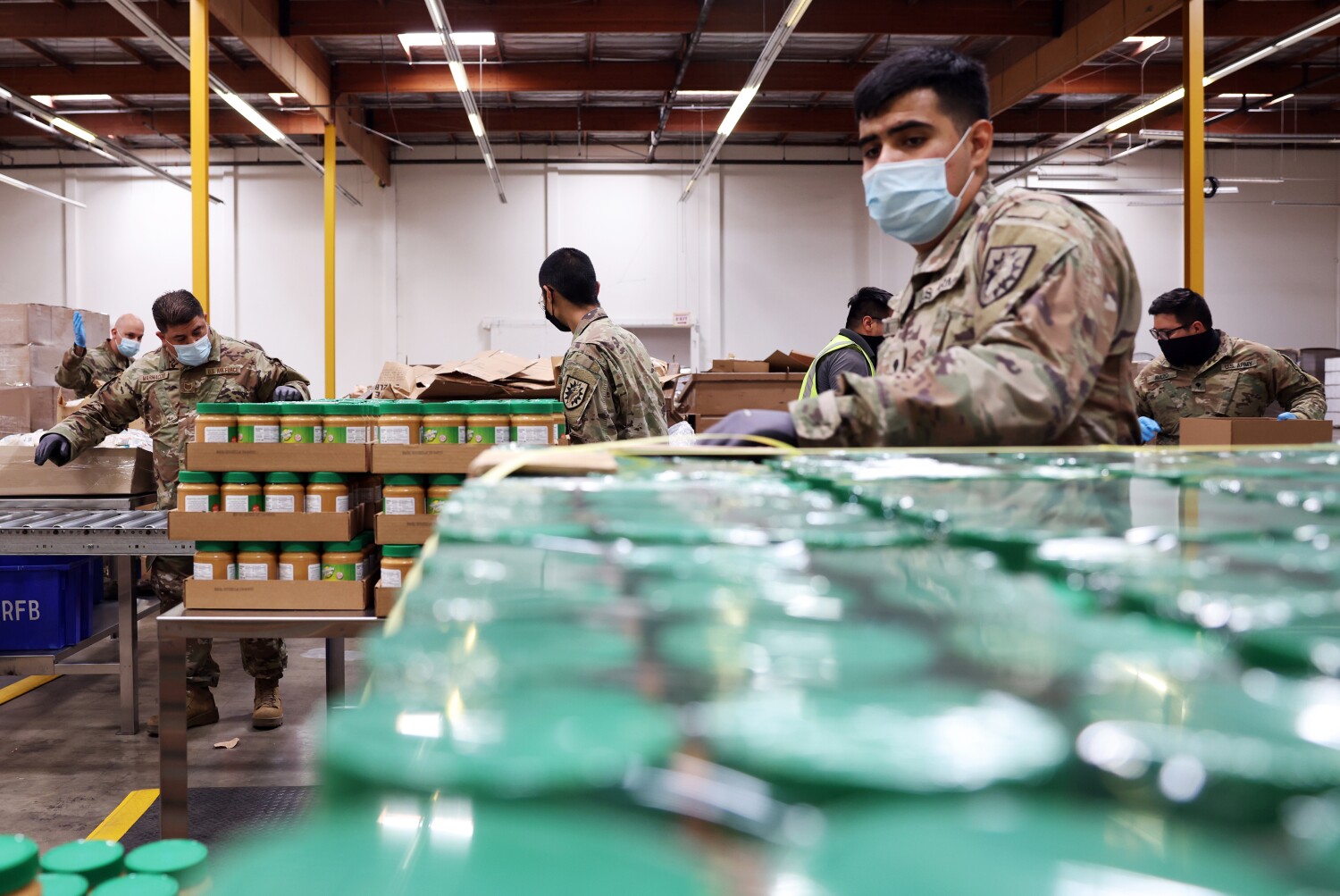 This is a reminder for those of us celebrating our new freedoms.

Many of our neighbors remain in crisis, even as masks and COVID-19 case numbers come down.

In Los Angeles County, far more people are experiencing food insecurity than before the pandemic.

Even before COVID shut down California, too many of us — largely because of our sky-high housing costs — had too little left over after paying rent to put food on the table without government assistance, food banks and neighborhood food pantries.

And then came the furloughs and the layoffs as businesses temporarily shuttered or closed for good. People lost their jobs or got sick or had sick loved ones. They racked up enormous debts — maxing out credit cards and deferring rent and mortgage payments and falling into deeper and deeper holes.

Since the pandemic began, the number of people receiving food each month from the Los Angeles Regional Food Bank has tripled, from 300,000 to more than 900,000. That number hasn’t gone down, though the amount of food distributed has dropped slightly from the pandemic’s peak.

It’s at best a modest recovery, one that could easily be erased as deferrals and moratoriums end and bills can no longer be put off and large numbers of tenants start getting evicted.

The food bank estimates that 1 in 4 people in Los Angeles County experience food insecurity. That’s both frightening and appalling if you stop and think about it.

The food bank recently openeda 256,000-square-foot warehouse it was able to purchase in the City of Industry during the pandemic — when such hard-to-find space was not quite at its usual premium. Not yet built out, that wide-open space has been an enormously helpful addition in this time of crisis to the three buildings the organization owns in South L.A. and the other sites it leases, including a big one in the City of Commerce.

Soon, workers will begin building the space out as a food distribution hub with a volunteer center. They’ll put up pallet racking to store food all the way to the ceiling and a huge refrigeration and freezer area to store frozen and perishable items, such as meat and fresh vegetables and fruit. That will help increase capacity and allow the food bank to accept more donations of the most healthful and nutritious food.

At that warehouse, which I visited this week, there is no sense that we’re out of the thick of it. Uniformed members of the California National Guard are still there, speedily packing boxes of shelf-stable food for those in need — as they have been since the spring of 2020, deployed by our governor when the shutdown kept volunteers away. They’re up to 2 million boxes. I watched them fill those — with great efficiency, in two assembly lines — with bags of rice and beans and walnuts and jars of peanut butter and packets of flaked potatoes.

Volunteers and cash donations still are desperately needed, not just at the food bank but also at the hundreds of local sites where it distributes food for others to give out.

The food bank has long held mobile distribution events, setting up shop for a day at places like community colleges, where need tends to be great, but there often aren’t organizations that give out food nearby. Pre-pandemic, a large walk-up event of that sort might have drawn 500 takers, Flood told me. At the start of the shutdown, when the food bank started holding drive-through events for COVID safety, numbers skyrocketed right away — a clear indication of how many of us don’t have padding in our budgets to ride out a bump in the road, even briefly.

“We started seeing lines of cars — 2,000, 3,000. At an early one at the Forum, something like 7,000 showed up,” Flood told me. “People were rolling down their windows and just saying they were out of food, that this was the difference between them eating or not.”

You don’t forget those conversations easily. I still often think about the people I met at a drive-through event the food bank held at the Hollywood Bowl back in August: the 58-year-old out-of-work trainer who had run through his savings; the office cleaner who was out of a job, along with her husband and grown daughter. I think about how grateful they were to see their trunks filled with food: boxes like the ones the National Guard members were filling in the City of Industry, as well as ones full of fresh produce and frozen meat and poultry.

Some of the California National Guard members have been able to go out and see where their boxes are going.

There I also met Valerie Rodriguez, the food bank’s lead warehouse supervisor in South L.A., who was once hungry herself, struggling to feed seven children, often relying on free food from a local church.

The food bank never stopped delivering during the pandemic, she told me, even as staffers got the virus. The need was so great, she said, that “there really wasn’t any time to be scared.”

The food bank is able to do large-scale distribution events, sometimes partnered with L.A. County. But it often directs people in need to smaller organizations in their neighborhoods that distribute its food — places that provide a lifeline to so many. In the course of the pandemic, the food bank gave more food than it ever had to school systems, including L.A. Unified. It also started supplying more than 100 new partner agencies on top of the 600 it already had. A few came into existence to help. Some were community organizations that started distributing food for the first time or suddenly found that the need was too great to feed people on their own.

Consider the situation in which the West Valley Food Pantry has found itself since the pandemic first pounded California. The pantry was created in 1985, during a recession, as a coalition of local communities of faith came together to help those in need. Located at the Prince of Peace Episcopal Church in Woodland Hills, it used to feed mostly nearby senior citizens and homeless people. Before the shutdown, it served about 3,000 to 3,500 people a month.

In a flash, in April 2020, that number went up to 14,600, said Debbie Decker, the pantry’s executive director. It still hovers between 10,000 and 12,000. Decker told me the pantry, which also gets donations from local grocery stores, used to get “maybe two food pallets, maybe less” from the food bank, but now, “it’s a minimum of 14.”

Once the pandemic began, the pantry started getting visits from people driving in from Orange County. People from as far away as Bakersfield showed up. So did families living in their cars, parents who’d lost their jobs and had small children to feed. For the first time, it needed donations of diapers and pet food to help newly desperate people who had never asked for help before. They’re still coming. The pantry needs more financial help.

Do you have a neighborhood church, synagogue, mosque or community organization like the West Valley Food Pantry, giving out food day after day? Have you ever rolled up your sleeves and helped load boxes at the food bank or considered sending a donation? Maybe help out if you can — with money or some volunteer hours — as you make your plans to start venturing out, returning in person to buy food and eat at restaurants.