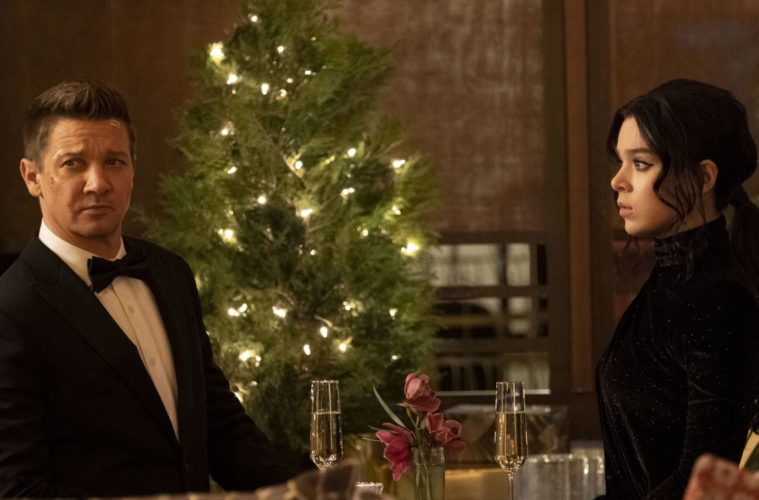 In the words of the great Bonnie Tyler, “Where have all the good men gone and where are all the gods?” In this day and age, we’ll take our heroes where we can find them, even when they are not all that heroic. This week, we take a look at reluctant saviors and anti-heroes, men who are fighting the good fight, even if it isn’t necessarily a conventional definition of good.

Disney continues to expand the Marvel Cinematic Universe by leaps and bounds by turning to television as a means of preparing audiences for future theatrical endeavors. And this time around, it looks to the Avengers’ archer to pave the way.

Disney+’s Hawkeye examines the life led by Clint Barton (Jeremy Renner), a one-time Avenger who tarnished his soul after his family disappeared in “the Blip.” Devastated by the loss and angry at the world, he embraced his dark side and became a murderer, a man who hunts miscreants and infidels without repercussions. Then his family returned, and it seemed the former special agent of S.H.I.E.L.D. could return to his life without any fallout. Until now.

Enter Kate Bishop (Hailee Steinfeld), a young talent who can fight, shoot, and mouth off with the best of them. After she collides with Hawkeye (her personal hero), the two team up and face his troubled past together, including victims of his ruthlessness. In addition to addressing his harried history, the duo also partake in a bit of heavy lifting for the MCU by establishing the anti-hero’s legacy while bringing in a few key players from previous Marvel properties that will make fans squeal with glee.

Like other Marvel shows, Hawkeye serves many purposes. It introduces a new generation of heroes and villains while tying the small screen antics with future films. Unlike WandaVision and Loki, Hawkeye deals strictly with street-level heroes. The stakes are smaller, but the implications for the Marvel Cinematic Universe are just as big.

Though the show lacks the depth of Wanda or the far-reaching implications of Loki, it has a humanity that makes its material easier to relate to. This isn’t about saving the Earth or even the city, but about dealing with mistakes of the past, which cannot and will not be ignored. More importantly, Hawkeye signifies an end of an era, a good-bye to legacy characters and storylines while it sets off to embrace a brand new Marvel Universe.

In 2013, the world said goodbye to Dexter Morgan (Michael C. Hall), Showtime’s beloved serial killer who made it his mission to personally rid the world of bad people. Now almost a decade later, it appears the prodigal son of slaying has returned, but does that make him worthy of your time?

Before we dig into Dexter: New Blood, it’s best to address the plastic-wrapped elephant in the kill room: the show’s awful, no-good finale that seemed to betray an entire fanbase by ending the world with a whimper. Can this new series finally make up that disappointment?

The new series picks up exactly where we left off, for the good and the bad of it. Dexter is now Jim, living the quiet life in rural Iron Lake, NY. He has a job, a nice girlfriend (who also happens to be the sheriff), and a routine that keeps him safe, sound, and out of the killing biz. That is until his teenage son Harrison (Jack Alcott) comes a-calling, threatening to expose his past. He isn’t the only ghost from Dexter’s past to return as deceased sister Debra (Jennifer Carpenter) unmercilessly haunts his waking life. Throw in a new serial killer stalking the area, and suddenly, good old Dex is back to his old tricks.

To be clear, Dexter was never “great television.” It had an avid fanbase made up of people who enjoyed a good gory story with great performances, but its mark on the cultural zeitgeist was fairly brief. It was a delightfully disturbing drama until it began to take itself a bit too seriously. This new round of Dexter is almost a return to form, though sans the “monster of the week” premise that drove the early seasons of the show.

Having Dexter confront his past and giving him familiar obstacles to overcome, the show seems to plead for forgiveness for its past sins and for another chance to shock and engage. In a world where second chances are hard to come by, Dexter: New Blood is worthy of another try, at least from die-hard fans of the previous rendition looking for creepy drama and maybe even some closure.

In May 2019, the Battle of King’s Landing ended, thus ending Game of Thrones and leaving an Iron Throne-shaped void in the sci-fi fantasy community. Netflix then swooped in a few months later with The Witcher, an epic tale with a built-in fanbase thanks to books, video games, and previous adaptations. The story follows Geralt of Rivia (Henry Cavill), a solitary hunter of monsters who himself is a bit of a monster. Hardened by the world, Geralt was at peace with his clandestine lifestyle until his fate became entangled with two spellbinding maidens who hoisted their baggage onto his burly shoulders.

Picking up where last season left off, the second one sees Geralt finding his “child of surprise” Ciri (Freya Allan), a princess with whom he is bound to protect, while his on-again/off-again ladylove Yennefer of Vengerberg (Anya Chalotra) finds herself in one precarious predicament after another. Faster paced this time, the show goes deep into the lore and the politics of this strange land, leading viewers by the hand to explore the lives of Witchers, Mages, elves, and all the flesh-eating beasties that roam the countryside. This deep dive into the people and politics of the medieval-style surroundings known as “the Continent” is indeed interesting, but it’s the converging storylines and characters that are a true joy.  Ciri and Geralt complement each other as a team, driving their own character arcs forward through their partnership. The two share a chemistry that pulls in viewers, as Geralt gently explains the world of the Witcher to both his student and the audience.

For fans of the fantasy genre, The Witcher is the whole package. Elves, ancient prophecies, princesses, monsters, orphans with a destiny…you name it. What it lacks in Machiavellian scheming and slow-burn storytelling it makes up for in monstrous mutants and magical mischief. And that is not a bad thing. Honestly, not all fantasy series need to be prestigious or socially relevant (though this season tries with a pertinent storyline about the eradication of elves).

Sometimes you just want to watch a bunch of extras from the Renaissance fair fight practical effects with swords. The Witcher might not be important TV to many, but it’s charming, never boring and filled with interesting storylines, which is more than enough for fantasy lovers looking for entertainment that honors the genre.