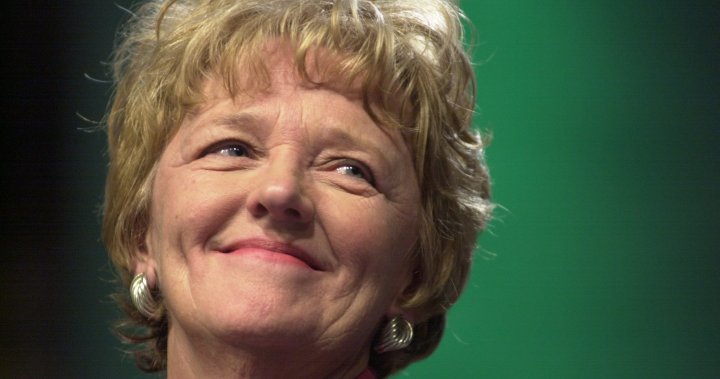 Former federal and Nova Scotia NDP leader Alexa McDonough has died at the age of 77, after a long struggle with Alzheimer’s disease.

McDonough was the first woman to lead a major political party in the country, leading the Nova Scotia NDP from 1980 to 1994, and later the federal NDP from 1997 to 2002.

Known as just “Alexa,” she is credited with laying the groundwork for Nova Scotia’s 2009 Dexter NDP government and the Jack Layton “Orange Wave” in 2011.

McDonough’s obituary published on Saturday described her as “a beloved, respected, and significant player in Canadian life.”

Alexa McDonough died this morning after a lengthy struggle with Alzheimer’s Disease. I was honoured and privileged to have been asked to write her biography. RIP, Alexa. https://t.co/VBvNxpeKFj pic.twitter.com/8YGuy8bMJl

Her career began in social work as the assistant to the director of the Social Planning Department at the City of Halifax in 1969. She later served as a faculty member at Dalhousie University’s Maritime School of Social Work, before moving on to politics.

“Over the years, she earned numerous honours, including the Order of Canada, the Order of Nova Scotia and four university honorary degrees,” read her obituary.

“She even had nicknames: the “Iron Angel,” the “Best Premier Nova Scotia Never Had,” “Our Lady of Shocked and Appalled.”

The obituary highlighted her efforts in humanity, including her support for Donald Marshall, Jr. “in his fight to clear his name for a murder he did not commit; for the widows and families of the victims of the Westray mining disaster as they — and she — fought for legislation to prevent future similar tragedies.”

It also described her as a “relentless optimist,” and “wickedly, self-deprecatingly funny.”

“We’ll miss her dearly. Rest in power,” he wrote.

Today is a sad day for Canada.

Alexa Mcdonough was the first woman to lead a major political party in Canada.

She dedicated her life to social justice, championed women in politics, and never backed down from a challenge.

Those who wish to honour McDonough’s memory, the obituary read, can donate to a local charity, “or to any of the many good causes close to Alexa’s heart.”

As stated, these include:

“No gifts, flowers, or cards by family request,” the obituary read, adding that because of COVID-19, a celebration of McDonough’s life will be held at a later date.