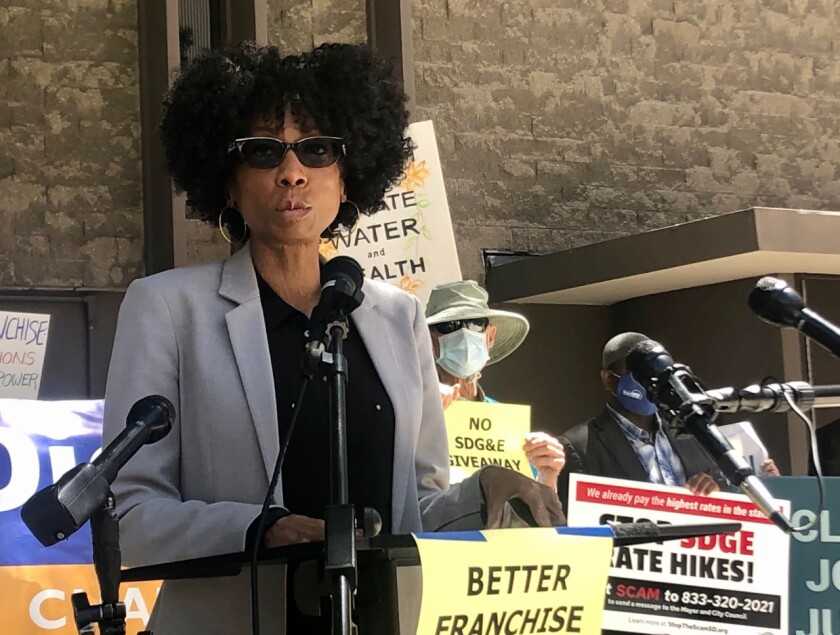 When Mayor Todd Gloria announced a slate of police reforms and “public safety priorities” last month, it was not a direct result of George Floyd’s death last May and the racial and social justice protests that followed. But it was not entirely unrelated, either.

The events of the last year have put police reform “much more front-of-mind,” Gloria said earlier this month. “People want to see change.”

Some change has been implemented in the last year, mostly last summer under Gloria’s predecessor, as a direct result of Floyd’s death and the ensuing protest movement. The San Diego Police Department banned the use of the carotid restraint and implemented new de-escalation, duty-to-intervene and protest response policies.

Gloria said developing his latest reform proposals was a “collaborative process” with other city leaders and was based on conversations he had on the campaign trail, as well as his work in the state legislature and as a city councilmember.

One public safety reform — the elimination of gang injunctions, which are court-approved orders that restrict the movements of alleged gang members — has already been implemented. Others, like exploring policies to limit the use of pretextual stops and consent searches, hew closely to prior recommendations from a citizens advisory group and demands from activists.

The reform proposals also bear the fingerprints of Councilmember Monica Montgomery Steppe, who has long been a champion of reimagining public safety and reforming the Police Department.

“My input has been very public,” Montgomery Steppe said earlier this month, referring to her work before being elected to the council in 2018 and her position as chair of the council’s Public Safety and Livable Neighborhoods committee. “Much of my input has been taken into account … I’m grateful Mayor Gloria has come in and made this a priority.”

Montgomery Steppe echoed Gloria when she said the events of the past year “have been very eye-opening for people across the country and the world.”

She said Floyd’s death and the related protests gave leaders like her “the opportunity to have real conversations about what we mean by police reform” and prompted “very honest, real, informed conversations about the ways we implement public safety.”

Montgomery Steppe said public safety is not just about law enforcement but includes “a more wholistic, comprehensive approach,” including adding streetlights around the city, funding graffiti and weed abatement and making sure sidewalks are safe.

She said it could also include reevaluating sending police as first responders to certain mental health, homelessness and quality-of-life calls.

Gloria’s proposals address that issue. One is to “explore alternatives” to arrests for low-level offenses. Another is to “review the types and categories of calls dispatched to the San Diego Police Department.”

Both ideas propose looking at ways police officers could stop responding to issues for which they’re not needed, such as for defective traffic signals, water leaks, and such low-level offenses “that may be (outside) of their training” as behavioral and mental health, alcohol and substance abuse offenses and for quality-of-life calls like noise complaints, drinking or urinating in public and disorderly conduct.

Detective Jack Schaeffer, president of the San Diego Police Officers Association, said last month he was in favor of that idea.

“By not going to certain calls like that and letting others handle those, it would lighten up the load on officers and free us to do real community policing,” he said.

“Collectively, we are asking a lot out of our police officers, especially when they are dispatched to calls for low-level offenses that pose no threat to public safety or private property,” Gloria wrote in the proposal.

The mayor said he also is committed to working with police Chief David Nisleit to ensure dispatchers are trained to recognize what he called “bias by proxy,” situations where a civilian “racially profiles someone and calls the police as a result.”

Gloria said last week that he landed on his 11 proposed police reforms and public safety priorities in part because they were “specific and doable.” Instead of being too abstract, he said, his proposals were “actionable and … measurable.”

But some observers don’t believe Gloria was specific enough in laying out his plans to implement desired reforms. While some of the proposals included specific actions — such as eliminating gang injunctions, which the district attorney has already moved to do, or fully funding the city’s new police oversight commission, which is included in Gloria’s proposed budget — others are more ambiguous.

“Mayor Gloria will work with Chief Nisleit to ensure that all officers are continually trained to recognize their implicit biases …” reads one proposal. Others also mention working with Nisleit and Montgomery Steppe, or state he’ll “review” issues or “explore alternative” solutions to problems.

“(Gloria) talks a lot about meeting with (Nisleit), but what I don’t see is a lot of community collaboration,” said Eryn Wilson Nieves, a civic engagement manager with Alliance San Diego, a community empowerment organization that is a founding member of San Diego’s Coalition for Police Accountability & Transparency, or CPAT.

“A big step with any police reform or any policy reform is having community input,” Wilson Nieves said. “You need to have the community on board and understanding what the goal of the work is.”

Gloria acknowledged that not all of the proposals would be “straightforward” to implement, but he said he is committed to taking the time “to get it done the right way,” adding that he wants San Diego to be an example to the rest of the country.

Montgomery Steppe said she’ll play an important role in implementing the reforms as chair of the Public Safety and Livable Neighborhoods committee, as she did in ushering Measure B through to the ballot, where voters overwhelmingly supported the measure to replace the city’s police review board with a new, more independent commission.

“In committee is where the most robust discussion on these topics is being had,” she said.

“I think that the reforms are multiple, for sure, and I’m grateful to have a partner in this work,” she said. “What I believe we need to get to the core of is truly understanding how we can reimagine public safety.”

Wilson Nieves said the proposals are not strong enough.

“They didn’t hit the mark for what our communities need,” she said, pointing to the mayor’s proposal to “explore policies that would limit the use of pretextual stops and consent searches.”

The proposal states Gloria “would like to develop clear expectations for when consent searches are appropriate,” and that he’ll work with Montgomery Steppe, police officials and community groups “to collaboratively define” what constitutes a pretext stop and identify ways that such stops “can be limited, and align community expectations and police practices.”

That falls well short of CPAT’s proposed city ordinance, which states in part that “police should only stop and/or search an individual if there is a public safety reason to do so.”

Wilson Nieves said the mayor’s proposals are at least a step in the right direction.

“With more advocacy, more pushing and more community support, I believe we can win stronger language,” she said.

Gloria said that whatever happens, he is committed to his proposals and there will be more to come once the first slate is implemented.

“It wasn’t just a tweet; this is real, this is important,” he said. “A concern that I have, particularly as a man of color, is this could get squeezed out. I’m committed to that not being the case.”