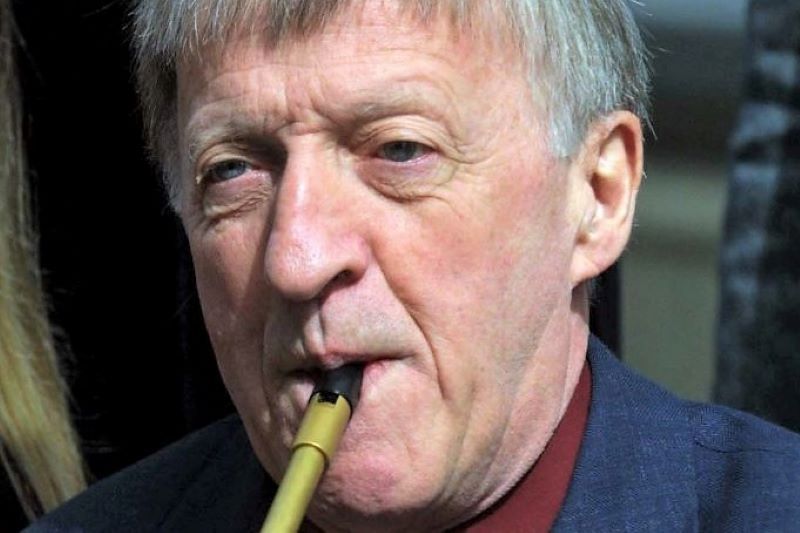 Paddy Moloney, Ireland’s greatest traditional music musician, passed away on Monday evening in Dublin at the age of 83.  He was a legendary musician who inspired generations of Irish to become involved in reviving Irish music.

But for many Americans, Moloney’s greatest performance occurred not at a packed Carnegie Hall, which The Chieftains regularly sold out, but a few miles south in Manhattan at Ground Zero after September 11th.

Nobody could hear him; very few paid attention when he produced a tin whistle from his jacket. The backdrop noise was deafening with cranes, diggers, men wielding shovels, all trying to clear the pile.

In the midst of it all was Paddy Moloney. He was standing on the ruins of the World Trade Center as the desperate search for bodies continued, his tin whistle in mouth.

Then he began to play that beautiful Irish language ballad “Taimse Im’ Chodladh is Na Duisigh Me” (I Am Asleep Do Not Awaken Me). As Conor O’Clery of The Irish Times reported, “Sometime after 9/11, Paddy Moloney of The Chieftains came to New York and I took him to Ground Zero, where he wished to play a lament for the dead on his tin whistle. The haunting strains of ‘Taimse Im’ Chodladh’ and ‘Dóchas’ (Hope) were almost drowned out in the harsh cacophony from mechanical diggers and cranes.”

The fact that Moloney would make that trek and share a moment with all those that suffered and died there said so much about the man. He understood better than anyone the ability of music and song to move people.

Picture of Paddy Moloney playing music at Ground Zero in the aftermath of 9/11. He came to New York for the funeral of Matthew O’Mahony, a fan of his band who was killed in the attacks. He performed Táimse i mo Chodladh (I Am Asleep) and Dochas (Hope) to the crowds. pic.twitter.com/fYzuImNJFR

Born in Dublin, throughout his lengthy career Moloney restored a sense of pride and knowledge in the old Irish traditional music that was being swept aside by the pop culture generation.

It is not fanciful to say that men like Moloney saved Irish traditional music from disappearing. Certainly, along with the great composer Sean O Riada who wrote a seminal work, Mise Eire (“I Am Ireland”), they did herculean work bringing Ireland back from the brink of seeing its traditional music die.

Moloney was not a conventional traditional musician. He grew up in working-class Dublin and learned the tin whistle and then the uileann pipes, a much-neglected instrument at the time.

In 1962, Moloney created a band to play traditional Irish music, and to celebrate and widen appreciation of Irish music. Thus was born The Chieftains.

The Chieftains may well be most famous for their 1987 Irish Heartbeat album with Van Morrison. Their music was used in films like Gangs of New York and the hit series the Year of the French.

Na Píobairí Uilleann (NPU), the Society of Uilleann Pipers, described Moloney as “a giant of a figure in Irish life.”

“He helped popularize Irish music all over the world and in doing so, brought the sound of the uilleann pipes to the attention of so many. We have lost one of the country’s foremost artists whose legacy is inestimable at this point.”

May the great Paddy Moloney rest in peace.

*This editorial first appeared in the October 13 edition of the weekly Irish Voice newspaper, sister publication to IrishCentral.