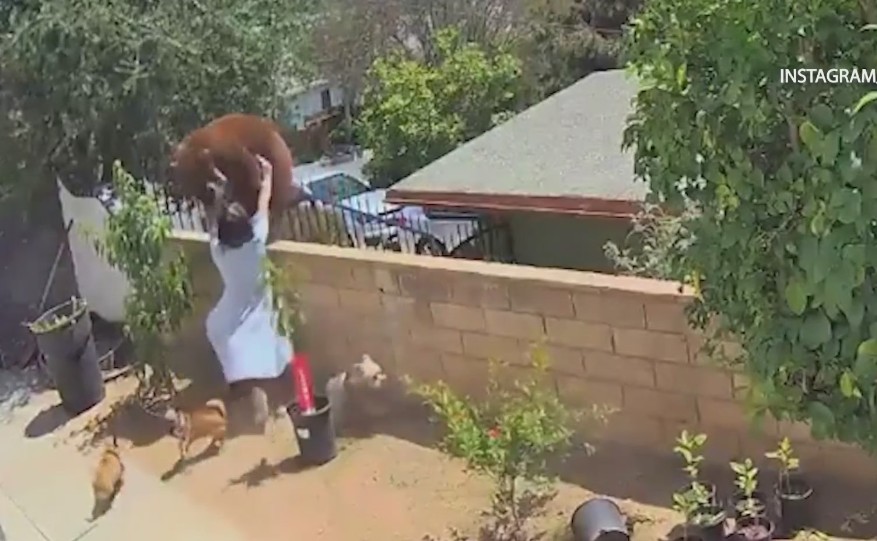 A 17-year-old girl in the San Gabriel Valley was captured on video running up to a bear in her backyard and pushing it away to save her dogs Monday.

The surveillance footage shows the moment just after 2:30 p.m. when a brown bear and two cubs walked along a brick wall in the teen’s backyard in Bradbury. Three of the family’s dogs started barking at them. At the time, the family was gardening at another end of the yard when they heard the barking. Videos shows the bear swat at the barking dogs a few times before the teen runs up.

On Facebook, her mother, Citlally Morinico, called it “one of the scariest moments in life.”

Her daughter, Hailey, said she thought the dogs were barking at other dogs when she first ran toward the wild bear. “I run to see what they’re barking at and it’s not a dog — it’s a bear,” she said.

“I see the bear, it’s grabbing my dog, Valentina, and I have to run over there. She’s a baby,” Hailey said. “And the first thing I think to do is push the bear. And somehow it worked.”

Video shows her shove the bear, causing the animal to fall backwards and off the wall.

The teen suffered a sprained finger and scraped her knee, but she and her mother are thankful those are her only injuries. Hailey said she ran from the wild bear as quickly as she could.

“By the time that the bear got pushed over, I was out of there with my other dog,” she said.

The family said this isn’t the first time seeing a bear or other wild animals around their home in Bradbury since moving there in February. Citlally said bears are usually spotted in the neighborhood around two to three times a week.

But this is the first time any of them have gotten so close to the wildlife, they said. And it may be the last — both Hailey and her mother suggested no one do what she did.

“Do not push bears,” Hailey said. “Don’t do what I did, you might not have the same outcome.”